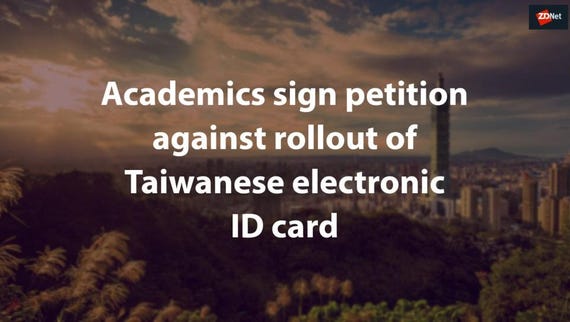 Over a hundred students, academics, industry professionals, political figures, and NGOs have signed a petition to void plans to replace Taiwan's ID card with a new electronic version.

Set to begin rolling out in October, the chipped card [PDF] would allow digital signatures, new anti-forgery capability, and other applications that could be built on top of it.

The card will physically display the cardholder's name, birth date, ID card number, and marital status. Further details, such as gender, parents, spouse names, birthplace, and home address would also be stored within an embedded chip.

The petition, started by the NGO Taiwan Association for Human Rights on April 21, said that the electronic ID cards bring about new legal conflicts along with personal information and information security risks.

Instead of slowing down the rollout due to the coronavirus pandemic, the island's government has used the public's desire for safety and convenience to speed up promotion, it said.

Mei Hsing, a computer scientist at Fu Jen Catholic University in New Taipei City, who signed the petition, told ZDNet there are doubts about the information and security literacy of a large number of people, including managers and developers.

Chuang Tyng-Ruey, a computer scientist at Academia Sinica's Institute of Information Science in Taipei, who also signed the petition, told ZDNet he wants a digital ID certificate. But he doesn't want it to be tied to an identification document he must physically carry.

"You don't want to put eggs in the same basket," he said.

Personal information protection should be guaranteed by legislation, he added.

Taiwan's Ministry of Interior published a statement online Thursday refuting the petition's allegations of there being personal information risk and potential legal issues.

The ministry said that the government attaches particular importance to guaranteeing the safety of personal information and would follow relevant regulations, including respecting individual autonomy.

The digital certificate function could be easily added over the internet by choice, it said. People could also decide to remove it later if they don't want to use it anymore.

It added that the amount of information stored in the card is small and would be password protected and stored in partitions.

If chipless and chipped ID cards are both around, it would create identification difficulties and waste resources, the ministry said.

Taiwan instructs government agencies not to use Zoom

Citing security and privacy concerns, Taiwan's Department of Cyber Security has issued an advisory to all government agencies prohibiting the use of certain video software, such as Zoom.

During a pandemic when lots of people are staying home.

Startups could receive up to 12 months of funds for preferred stock.

How coronavirus is affecting the Taiwanese tech industry

Join Discussion for: Academics sign petition against rollout of...