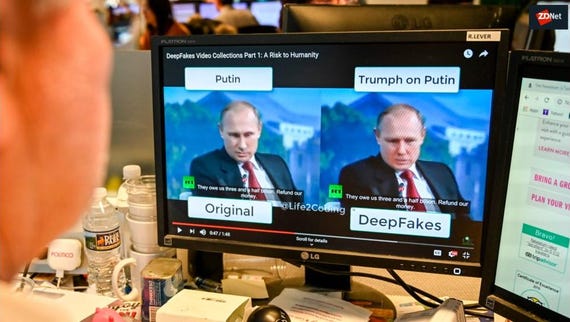 Artificial intelligence, quantum computing, 5G and the rise of the Internet of Things are just some of the emerging technologies that could aid cybercriminals in ways that could make them more dangerous than ever – and law enforcement must innovate quickly in order to help keep citizens safe, a new report has warned.

Published by Europol, the 'Do criminals dream of electric sheep: how technology shapes the future of crime and law enforcement' report – the title of which references the work of science fiction writer Philip K. Dick – explores the consequences that emerging technology could have for cybercrime.

It's also suggested that law enforcement itself could take advantage of some of the emerging technologies to help in the fight against cybercrime. For example, AI is detailed as a technology that could benefit law enforcement by helping to improve the security of systems and devices.

But the report also warns that it could help provide hackers with new attack vectors for conducting malicious activity, such as improving the already high success of phishing attacks by using AI to tailor malicious emails and responses, as well as deploying AI to determine the best targets.

The spread of AI could also make it much simpler for malicious actors with limited levels of expertise to conduct sophisticated campaigns. One area Europol fears this could have an impact is in the realm of deepfakes and disinformation – the report even warns that "criminals are already reported to have used deepfake audio impersonating chief executives in an attempt to defraud organisations".

Quantum computing is also identified as a potential risk to the cybersecurity of European citizens. While experts say that quantum computing can help boost the security of systems, Europol warns that there's the potential that the technology could fall into the wrong hands, and these individuals could exploit the power to crack the encryption of machines using the current standard.

"Malicious actors in possession of a quantum computer would have the opportunity to break traditional security standards, orchestrate far more sophisticated cyberattacks, or decrypt information and communications," the report warns.

There are also concerns around 5G mobile connectivity, due to the challenges it could provide for law enforcement. The report argues that 5G technology will "complicate the use of the unique mobile phone card identifiers that allow law enforcement to identify and locate devices", making it more difficult to carry out legally permissible technical investigation and surveillance measures of suspected criminals.

This would mean "one of the most important tactical operational and investigation tools would therefore become obsolete", providing a potential boon for criminals who want to hide.

"The potential challenges for law enforcement as a result of developments within the area of 5G do not appear to be a priority for developers," the paper adds.

The rise of the Internet of Things has already caused security issues – such as the Mirai botnet – but there's a fear that as more and more IoT devices enter homes and workplaces, the insecurity in them could prove extremely lucrative for them.

"The vulnerability of IoT devices may be exploited by criminals seeking to collect personal data, compromise user credentials or even spy on people or organisations," warns the report.

Europol has already made efforts to boost security in the Internet of Things, but the organisation is aware more work needs to be done.

However, the report isn't all doom and gloom, as it points out how ever-advancing technology can also help benefit law enforcement, with AI and machine learning able to play a prominent role in the fight against crime and terrorism.

"It is no longer good enough to be reactive. Our ability to predict which emerging technologies criminals will turn to next is instrumental to our mission of keeping EU citizens safe," said Europol's executive director, Catherine De Bolle.