The two futuristic retail experiences offer a contrast in how advanced tech can be used to prepare beverages on the spot as well as eliminate the scourge of the checkout line. But humans are still in the picture for now.
Written by Ross Rubin, Contributing Writer on April 15, 2019 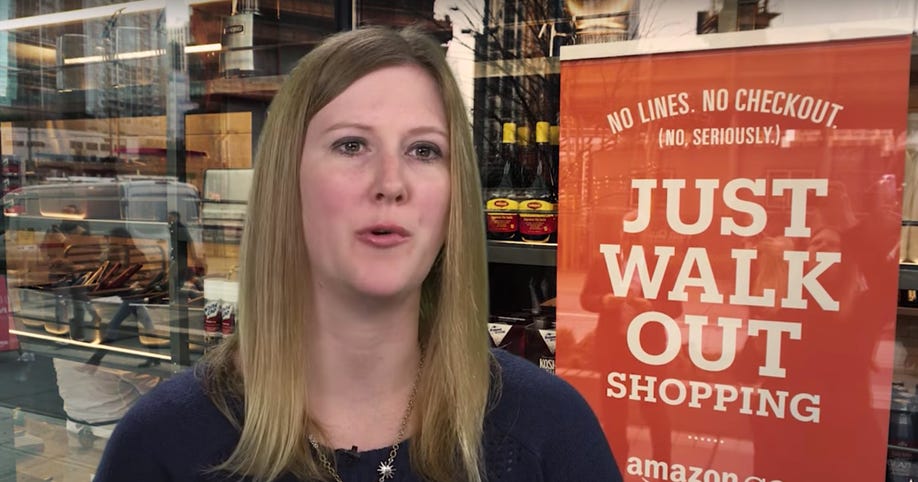 CVS became one of the first national retailers to experiment with self-checkout as a primary means of handling payment and bagging in stores. But the heavily guided process was error-prone and frustrating. By 2015, the drugstore retreated from the initiative, but it still offers a tweaked version of the stations in many stores. Costco had also removed self-checkout from its stores, although it began experimenting with it again in 2017.

Nowadays, retailers ranging from major supermarkets to The Home Depot continue to offer self-checkouts, but there is often a store staffer nearby to assist with the inevitable glitch -- a product that won't scan, a coupon that won't activate, an exhortation to bag an item that has already been bagged. A customer base weaned on delivery from remote websites and acclimating to local delivery services demand better. There's nothing about being physically present in a retailer that should infuse a transaction with any more friction than a one-click purchase.

Last week, I visited two San Francisco stores that offer different but complementary views of a retail future in which humans play a more limited role. The first of these was Amazon Go, the marquee brick-and-mortar manifestation of the online retailer that has long waged war against transactional friction. Indeed, Amazon Go amplifies the meaning of what has traditionally been called a "convenience store." Upon entering by scanning an app-generated barcode that essentially opens a tab, Go tracks the items removed from shelves for you and any of your guests who enter with you. At the end of the shopping spree, you simply leave the store with your legitimately gotten loot. It's almost as convenient and not nearly as clandestine as the checkout-free supermarket scenario envisioned in a clever IBM commercial from 2006.

The food and sundries available at Amazon Go aren't the kinds of products typically associated with the retailer that one might find at one of its bookstores. These stores represent a futuristic but ultimately fractional part of the retailer's push into groceries, the massive market that is developing into its fiercest battlefield with Walmart. Of course, its main incursion is via its Whole Foods supermarket acquisition. For now, Amazon seems more focused on reducing prices at the organics-focused chain. But the number of Go stores may soon rival or exceed the number of Whole Foods' markets, as Amazon has announced plans to open thousands of the 7-Eleven competitors in the coming years as it contemplates smaller and larger versions that can accept filthy greenbacks.

A few blocks from the San Francisco Amazon Go stands the Market Street location of Cafe X (although popup versions are even closer). Entering the storefront, you are greeted with a friendly wave from the barista, but that's where the conversation ends, as all Cafe X beverages are mixed by a large robotic arm. Orders are entered via kiosks and drinks are picked up by entering a code on the arm's enclosure.

If Amazon Go is something out of an IBM commercial (thankfully not the creepy Linux one), Cafe X feels more like a transplant from The Jetsons -- its vision of mechanized accommodations brought in line with the limits of material reality. But while the two stores have very different focuses -- one a place to pick up a fairly wide variety of smaller items and one focused on producing variations on a single beverage -- they share a few traits. First, neither does completely away with humans. Both stores, for example, have staffers who perform a range of duties. These includie orientation for newcomers, although presumably the need for that would decrease over time. The Amazon Go store also hosts a human security guard for those who might try bypassing its seamless  checkout process; Fortunately for would-be thieves, the small stores cannot accommodate the menacing likes of ED-209 warning them to put down their burrito within the next 20 seconds.

There are other limitations to full automation. Cafe X maintains tables of snacks and the typical sweeteners that are beyond both the literal and functional grasp of the robotic barista. Indeed, the company's website emphasizes the role of humans in the experience to provide consumers with more background on its coffees even as its stations can operate unattended. And Amazon Go curiously requires manually adding a recyclable shopping bag within its app, much as Homo erectus had to. After hours, of course, both stores must rely on humans for replenishment and maintenance, although Amazon certainly makes no secret of its keen interest in robotics that might address such needs in the future.

Both retailers surely hope that the millions invested to fuel their concepts extend well beyond the novelty that demands an orientation. For now, reflecting what has no doubt been a more comprehensive R&D effort, the Amazon Go concept delivers a bigger improvement in the retail experience than Cafe X. But the Cafe X robotic arm and the self-service that surrounds it clearly show the potential of of the technology within any manner of service industries. It won't be waving goodbye any time soon.

Correction: This story originally noted that Amazon Go requires scanning an app-generated barcode to check out. The scanning is required only when entering the store.

Giant Eagle will bring robots into select stores
Digital inventory auditing is one of the growth areas of automation as brick-and-mortars fight back.