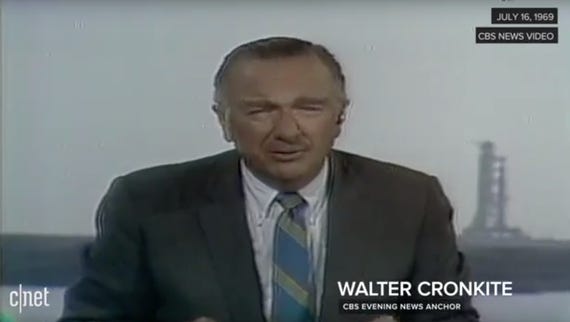 On the 21st of July in 1969, as the east coast of Australia saw the clock tick 12.53pm, Neil Armstrong took what became known as "one small step for man, one giant leap for mankind", walking on the moon to mark one of humankind's greatest accomplishments.

While many have seen the footage of Apollo 11, what many do not know is the role Australia played in having that footage sent to 600 million viewers around the world.

A bit of background

The job of receiving the signals from the moon fell to the National Aeronautics and Space Administration's (NASA) tracking station at Goldstone, California, and facilities in Australia at both Honeysuckle Creek near Canberra and Parkes, approximately 380km west of Sydney.

These facilities were chosen because they had the moon in view at the scheduled time of the moonwalk.

In 1969, second to only the US, Australia had the most NASA tracking stations, with one in Honeysuckle Creek and another in Carnarvon, Western Australia, used for tracking crewed spacecraft.

To keep continuous contact with the craft, at least three tracking stations were needed, spaced about 120-degrees apart in longitude. As such, Australia was in the right place to host a station -- it also didn't hurt that Australia was a politically stable country and friendly to the United States, which was an important consideration during the Cold War.

Falling under terms set out in an Australian–US Space Cooperation Agreement made in 1960, the 26m-long antenna at Honeysuckle Creek was purpose-built for the Apollo program.

These stations -- staffed by Australians -- were part of a worldwide network that allowed NASA to keep tabs on its craft from around the globe.

It wasn't until 1967 that live TV signals were able to be sent to the US from Australia, thanks to preparation for the moon landing.

Australia's international telecommunications operator, the Overseas Telecommunications Commission, accepted responsibility for establishing a satellite earth station in Carnarvon and it was quickly followed by a second Earth station at Moree in northwest NSW in March 1968.

"During Apollo 11 these stations transmitted signals from the mission to communications satellites, which relayed them to the US. Carnarvon sent telemetry from experiments on the moon's surface, while Moree sent the TV pictures," CSIRO explains.

The Commonwealth Scientific and Industrial Research Organisation's (CSIRO) 64m telescope that sits in an old sheep paddock in Parkes was designed in the late 1950s.

According to CSIRO, it was intended for radio astronomy, but NASA asked CSIRO if it could be used from time to time for spacecraft tracking.

Opened in 1961, it wasn't until a few years later in 1966 that CSIRO finally agreed to NASA's proposition that Parkes be formally incorporated into its Deep Space Network.

Parkes helped track NASA's first successful interplanetary mission, the Mariner 2 spacecraft that was sent to Venus in 1962, and then the Mariner 4 flyby of Mars in 1965, which returned the first close-up photos of the planet's surface.

NASA wasn't sure if sending a TV signal 384,000km back from the moon was feasible, as it had to share bandwidth with voice, telemetry, and biomedical data signal -- all from one 66cm radio dish on top of the lunar module that used just 20 watts of power.

What this meant, CSIRO explained, was that the TV signal had just a ninth of the bandwidth used to broadcast TV on Earth.

See also: 50 years after Apollo 11: What really rocketed us to the moon

Parkes was originally a backup to the 64m dish at Goldstone and the 26m dish at Tidbinbilla. Parkes would step in if the moonwalk was delayed and the moon had set at Goldstone. The Honeysuckle Creek antenna was initially planned to track the Command Module, Columbia, which would orbit the moon, while Tidbinbilla was to follow the lunar module, which would descend to the moon's surface.

Two months out from the flight, a plan-change saw the astronauts scheduled to rest for a few hours after they had landed. This meant that the moonwalk would start about 10 hours later, when the moon would be high overhead in NSW.

Parkes was then upgraded from backup to prime receiving station for the TV broadcast.

A fire at Tidbinbilla damaged the station's transmitter the day after Apollo 11 launched. Tidbinbilla's role was as a result switched with that of Honeysuckle Creek.

As the astronauts were stepping onto the moon, it was just rising at Parkes. The telescope was tipped right over, looking to the horizon, when it was hit by two sharp gusts of wind.

Working at the dish on that day was site electrician Ben Lam and radio engineer David Cooke.

Speaking with media at Parkes to commemorate the 50 year anniversary, the pair explained that acting like a giant sail, the dish was feeling force 10 times greater than was considered safe.

"The wind was that bad. Being a telescope driver I knew what we were allowed to do, and there was no way we could tilt the telescope at 60 degrees ... we said we'll keep going, we'll take a risk," Lam said.

The dish's tower shuddered and swayed as the wind alarm rang out in the control room, the pair remembered.

Using a lot more power than originally thought, Lam said the decision was quickly made to switch the power to diesel, rather than council power, as they couldn't risk a blackout.

Just as the moon rose into Parkes' view, the wind eased up. And this is when the broadcast began.

For a little over eight minutes of the broadcast, NASA switched between signals from Goldstone and those from Honeysuckle Creek. It was Honeysuckle Creek that captured the first footstep on the moon.

Eight minutes and 51 seconds in, the signals from Parkes' main detector came through.

NASA stayed with them for the rest of the two-and-a-half-hour broadcast.

The weather stayed bad at Parkes and the telescope operated outside its safety limits for the entire coverage.

Australia has a unique view into the galaxy from the dish in Parkes, and according to deputy head of the Australian Space Agency Anthony Murfett, it is dishes like this across the country that will continue to support missions going forward.

"They're the type of technologies we need."

"On this day 50 years ago, I was a seven year-old school boy sitting spellbound, watching what you're about to see. And it changed my life. It inspired me to realise that science can solve any problem that we can imagine and any problems that we can't imagine. It inspired me to dedicate my life to the pursuit of science," CSIRO chief executive Dr Larry Marshall said, ahead of replaying the footage from 1969 at Parkes on Sunday.

Marshall said at the time, he wasn't aware of the ingenuity, the global collaboration, or the "team world" that got together to make it all happen.

"At that time I didn't realise what a critically integral role Australia had played -- not just CSIRO but the NASA scientists and Australian scientists that worked hand-in-hand with them at Honeysuckle Creek to pull the images from the moon and allowed 600 million people around the world to see an absolutely life-changing event," he recalled.

"There hasn't been anything quite like it, which brought the entire world together, and we need more of that."

According to Marshall, CSIRO's journey to the moon started 30 years before the Apollo 11 mission when CSIRO was called upon by Australia to provide the country's first radar.

"I'm the chief executive of the CSIRO but like everyone today I'm a seven year-old school boy watching what this amazing dish did -- Australian science solving amazing problems."

It goes to show how much of a contribution a little sheep paddock in the central west of NSW can make to the rest of the world.