Back in 2016, it felt like Apple's AirPods changed the wireless earbud industry overnight. The idea of two independent earbuds that stayed in sync, were easy to use, and had respectable battery life was considered nothing more than a dream.

Fast forward to 2021, and Apple's AirPods have spurred the creation of completely wireless buds from nearly every major tech company -- and even smaller ones. For its part, Apple has released the AirPods Pro, AirPods Max, and, more recently, the 3rd generation AirPods. The newest model boasts a completely new design and new features that were once reserved for its more expensive AirPods.

At $179, the base model AirPods saw a small price increase, with Apple keeping the 2nd generation AirPods in the lineup at $129. 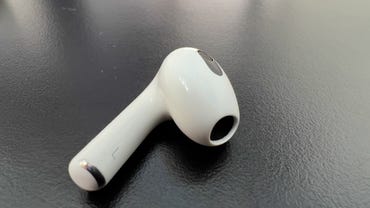 A familiar, but different design

Apple's standard AirPods have had the same design since their debut in 2016, but rumors circulated for the last year that the 3rd generation AirPods would look more like the AirPods Pro.

Sure enough, when Apple finally announced the 2021 AirPods, they debuted with a brand new look. The stems that come out of each earbud are shorter, and the earbuds themselves have a slightly new shape. The AirPods lack any sort of replaceable ear tip, with Apple keeping the one-size-fits-all approach it's taken with standard AirPods since their launch.

On each earbud is a new sensor that detects when it's in contact with your skin, enabling features like auto-connect and auto-pause or play when you put them in or take them out of your ears.

The stems each have a force sensor embedded. Squeezing either one will do things like pause or play music, answer a call, or trigger Siri, Apple's personal voice assistant.

The charging case also looks more like the AirPods Pro case -- only smaller. There's a single indicator light on the front of the case to let you know when it's charging or in pairing mode. On the back of the case is a button that you'll use to reset the AirPods or pair them to a non-Apple device.

Good earbuds aren't only meant for making and receiving calls when on the move. They can help you relax and even block out the world around you.

Charging the case, and thus the AirPods, can now be done three different ways. You can use the built-in Lightning port on the bottom of the case, a Qi wireless charging pad, or Apple's MagSafe charging tech. It's the same magnetic charging tech that's used in the iPhone 12 and iPhone 13, where Apple uses magnets to line up the pad with the device and hold it in place while it wirelessly charges.

Another notable addition to the new AirPods is that both the case and the earbuds themselves are IPX4 rated for water and sweat resistance. That doesn't mean they're waterproof, but you shouldn't worry if they get a little damp during a workout.

For me, the AirPods fit and stayed in without any issues. I'm not a runner, but walking around the block at a decent pace didn't cause any issues with their fit. Admittedly, everyone's ears are different, and this may not be the case for you.

My advice is to give these a try, even if the original AirPods gave you issues.

Whenever any company, let alone Apple, releases a new product, the core features almost certainly are improved. For example, the new AirPods promise and deliver on sound quality and longer battery life. For me, there's a more rounded sound to the 3rd generation AirPods compared to the 2nd generation AirPods; the newest ones appear to have the sound quality of the AirPods Pro. And battery life has gone up, with the new AirPods giving you six hours of listening time, up from five hours on the previous model.

If you include the charging case in battery life estimates, the 3rd generation AirPods should net you about 30 hours of listening time, up from 24 hours.

There's a catch to those battery life claims, though. That 30-hour max is if you use the AirPods with Spatial Audio turned off. Spatial Audio is new to the entry-level AirPods, and it's a welcomed addition. Previously, Spatial Audio was something only the AirPods Pro and AirPods Max offered.

When turned on while you're either watching a compatible video or streaming compatible audio through the Apple Music app, Spatial Audio creates a 3D audio experience that follows your head as you move it. For example, while listening to Post Malone's song "Circles," you can turn your head to the right or left, and the audio in your ears changes as you move. It leaves you with the impression that you're listening to live music directly in front of you.

Outside of the impact on battery life, the only downside to Spatial Audio is that not all music or videos in the various streaming apps are compatible. So one minute you can be listening to a track that fully supports Spatial Audio, only for the next track to lack support. It's an odd experience going back and forth, but it's not a dealbreaker by any means.

The new AirPods use the same H1 chip that Apple has used in previous AirPods, which enables features like quick pairing, easy device switching, extended range, and longer battery life. It also makes it possible to use the hands-free "Hey Siri" feature to send messages, get weather updates, and interact with the personal assistant just like you would on your iPhone or iPad.

Also: Shopping for an iPhone? Here's the right model for you

One missing feature that might be a deal-breaker for some is the lack of active-noise cancellation (ANC). That means the 3rd generation AirPods also lack a transparency mode to let in some environmental sounds. For those who don't consistently need or use ANC, it's likely to be a non-issue. But during the last few weeks, I've found myself wishing they had ANC. Whether it's blocking the background noise of my kids arguing over who gets the last piece of candy, or the clickety-clack of my mechanical keyboard that randomly gets on my nerves, ANC has become a feature I don't want to go without.

The 3rd generation $179 AirPods are going to be a hit. Just like the original AirPods, they offer functionality that can't be matched by the competition, although, many products now come close.

There's a lot to like about the latest AirPods. MagSafe isn't a groundbreaking addition, but it's something I think most iPhone owners will find themselves using as they add MagSafe chargers to their home or office. The new design looks a lot like AirPods Pro, save for the lack of adaptability. That said, I haven't had issues with fit or comfort.

Personally, I've missed active-noise cancelation that the AirPods Pro and AirPods Max offer. But most of my use is in a noisy environment where I've grown accustomed to background noise being non-existent.

If you've been holding out on upgrading your AirPods for something better, the 3rd generation model is certainly it. If you're new to AirPods, I can't think of a better way to start your wireless earbuds experience within Apple's ecosystem.