Apple's cash-cow iPhone unit blasted analyst expectations, making up for one of the quietest three-month periods in the company's recent history. 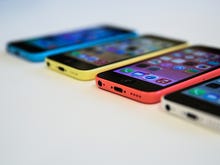 Expect a boring, quiet quarter. At least until the very end, when WWDC 2014 kicks off in early June. That's when the fireworks really begin.

Apple reported on Wednesday fiscal second-quarter income of $10.22 billion on earnings of $11.62 per share (statement). Revenue was $45.6 billion, way past its outlook from its January earnings.

Wall Street was expecting Apple to report earnings of $10.17 per share on revenue of $43.55 billion.

In the three-months ending March 29, the company sold 43.7 million iPhones, up from the 37.4 million estimated by Wall Street.

Apple also announced a massive bump in its share buyback and dividend program. In a statement, the company said it would also offer a seven-for-one split, meaning every shareholder will receive six additional shares for every share held so far. Since August 2012, the company said it has spent $66 billion in cash on its capital return program.

Apple shareholders will also get a dividend of $3.29 per share, up by about 8 percent on previous quarters.

It's little surprise that sales are down sequentially on its first quarter, which is typically its busiest period with the December holiday season. Apple's sales often go down in its second and third quarters, ahead of anticipated device releases towards the end of the year.

But the larger than expected decline in iPad sales will be a worry for Apple, which remains the market leader in the tablet space — though at this rate of decline, it might not be long before rivals begin to catch up.

Apple chief executive Tim Cook said late last year to keep an eye out on 2014 for new products and services. But so far, Apple hasn't issued a single new product, with the exception of iOS 7.1, a minor iterative update to its mobile platform.

We'll find out more on the next software versions, including OS X 10.10 and iOS 8 at the end of this fiscal quarter in June at the company's Worldwide Developer's Conference (WWDC).

In other news, former Burberry chief executive Angela Ahrendts will be joining Apple's executive team at the end of April, Cook confirmed on a follow-up earnings call.

Apple said for its fiscal third quarter outlook, it's expecting to bring in between $36 billion and $38 billion in revenue, in line with Wall Street, which was expecting $37.87 billion.

Apple's stock closed down 1.3 percent on the Nasdaq in New York at market close on Wednesday. In after-hours trading, shares were at the time of writing up by more than 8 percent.