Enterprise technology vendors are lining up automated tools and artificial intelligence to land customers looking to comply with GDPR by May 25, 2018.
Written by Larry Dignan on June 23, 2017 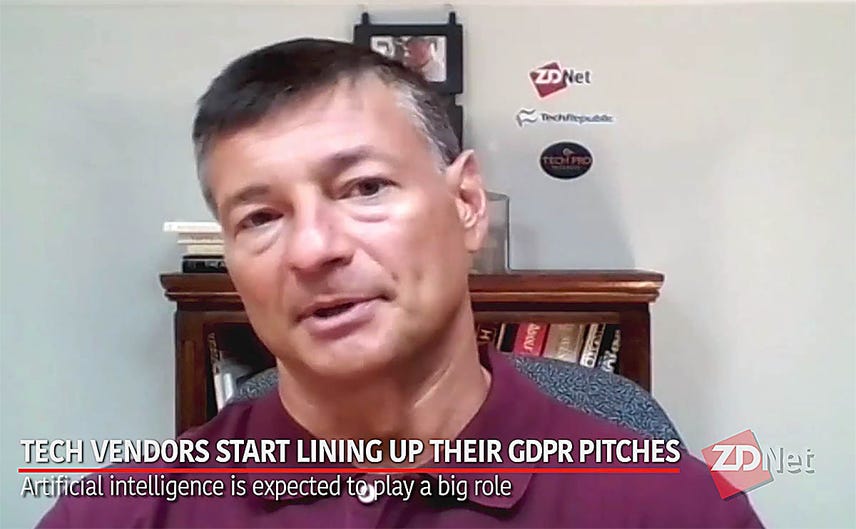 The European Union's General Data Protection Regulation (GDPR) will be implemented on May 25, 2018 and artificial intelligence is expected to play a big role in enabling enterprises to comply with the regulation.

GDPR requires companies to protect EU citizens personal information and know where data flows at any time. Although the EU's regulation only apples to Europe any company that operates there (in other words every business). The penalties are also steep for non-compliance.

And certainly enough to freak out a few companies.

Given GDPR is coming it's not surprising that tech vendors are going to scurry to create magic bullets to comply. The drumbeat is just starting to pick up. To wit:

IBM launched a series of information governance tools that are tied to data science as well as machine learning. IBM also formed the Open Data Governance Consortium for Apache Atlas to advance a broader community to focus on data protection. IBM's open source approach is interesting since it loops in the Hadoop community. Big data will be hard to wrangle for regulators and enterprises trying to comply with protecting information.

Big Blue has a software platform that can be mapped to GDPR, an information governance catalog, StoredIQ data visibility software and models for data scientists across Europe to use.

Informatica launched its Data Governance and Compliance Solution for GDPR. The application is designed to be a suite to put business, IT and security teams on the same page. The goal is to automate as much as GDPR compliance as possible. The software will leverage Informatica's CLAIRE Engine, which is the company's artificial intelligence platform.

Veritas CEO Bill Coleman sees GDPR as a key event for its strategy to mange, backup and protect data as it courses through data centers as well as public cloud providers. Coleman said GDPR rhymes with Sarbanes Oxley in terms of enterprise adoption of software and technologies to comply with regulations.

MobileIron, Qualys, Kaspersky and a host of others have been touting technologies for GDPR compliance.

There's good reason for the upcoming GDPR groundswell: Companies are worried that non-compliance could crush their prospects.