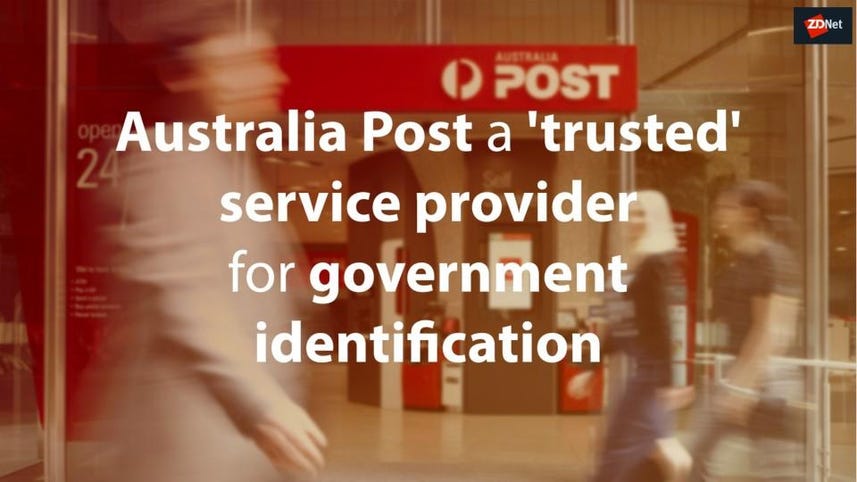 Australia Post's digital identification service has been accredited by the federal government under its Trusted Digital Identity Framework (TDIF), giving the postal service the "trusted identity service provider" status as a result.

The government-owned entity had announced in May 2017 it wanted to create the federal government's digital identity platform, saying at the time it would team up with the Digital Transformation Agency (DTA) to create a proof of concept that integrates its ID system with the Commonwealth's Digital Identity Framework.

The Australia Post Digital ID is the second identity provider to be accredited, with the federal government's myGovID being the first.

"The introduction of Australia Post as a second identity provider into the digital identity system is one of the foundational steps needed for the system to develop into a true whole of economy solution," Robert said.

"The Morrison government continues to build trust, privacy, and security into the digital identity system. It is designed to ensure that the identity system is reliable, trustworthy, and meets user needs."

According to Robert, the future of the system sees the involvement of many government agencies, banks, and other organisations.

"Providing Australians with choice and control of who they share identity information with was one of the recommendations of the Financial Services Inquiry that we have delivered on," he added.

The Australia Post Digital ID was officially launched in 2017. There are a handful of services that accept the identification platform, such as bitcoin.com.au, Coinjar, Airtasker, and Credit Union Australia.

Australia Post's Digital ID is currently approved for use in Victoria, the Northern Territory, Queensland, Tasmania, and the Australian Capital Territory.

In Victoria, locals are able to use the Digital ID as a proof-of-age card to enter a pub, using an on-screen animation that prevents replication and creates a temporary QR code that can be scanned to verify age.

People in the Northern Territory cannot use it to purchase takeaway alcohol, however.

Speaking at the Technology in Government conference in Canberra in August, Australia Post Digital ID general manager and founder Cameron Gough said the organisation was looking at bringing "real-world" ways people identify one another into a digital context -- like LinkedIn.

"If I was to verify an individual and say, 'actually I've known this person for two years', I can digitally assert that into their identity," he explained.

"A digital ID that said 37 people have endorsed that I am Cameron Gough, and they've known me for a collective 103 years, and those people can in turn be endorsed by an average of 13 people.

"You could start to build a fabric of people identifying people, and with that you can build in other things that you've done in society, temporal things, like this person's had a bank account for 10 years, they've had a credit card for three, his mobile number has been in existence for four -- so you start to build other points of identity."

The Australian government unveiled in November 2017 the public draft of its TDIF for how citizens' digital identity information must be managed.

The TDIF sets the rules and requirements for participants of the digital identity system, with the DTA saying it delivers on the privacy, safety, and security expectations of users.

In a statement on Tuesday, newly minted Minister for Government Services Stuart Robert said the fourth iteration of the TDIF would be released at the end of 2019 and would focus on optimising the opportunity for interoperability across the broader economy.

The TDIF sits alongside the federal government's Govpass digital platform, which was given an additional AU$67.1 million under the 2019-20 Budget.

"This funding will support the continued development of the underlying infrastructure of the system and roll out pilot programs that commenced in 2018-19, and will support further analysis of the requirements for the full rollout of GovPass," the government explained in its Budget documents.

"The GovPass Program is a key component in the further digital transformation of government and supports the government's commitment to better and more accessible digital services."

Last year's Budget had similarly seen GovPass gain AU$92.4 million in funding, with AU$60.9 million earmarked for an "accelerated implementation" by the DTA.

During Senate Estimates in November, DTA CDO Peter Alexander revealed that the Department of Human Services -- now Services Australia -- as well as the ATO, and Australia Post would be charged with the responsibility of GovPass in the first instance.

"They hold a lot of identity data already," Alexander said. "It could easily be extended to jurisdictional providers and commercial providers, who are talking to banks, the Australian payment network, and others who can provide identity."

The DTA outlined the process for applying for a Govpass in October 2017, with the system expected to match a user's photograph, as well as Medicare, driver's licence, and birth certificate details, with information already held by various government entities.

Govpass is expected to make the process of proving who an individual is to government "simple, safe, and secure" online, with former Assistant Minister for Digital Transformation Angus Taylor previously touting the platform as a faster, simpler way to move between online services provided by the Australian government.

MORE FROM THE POSTAL SERVICE