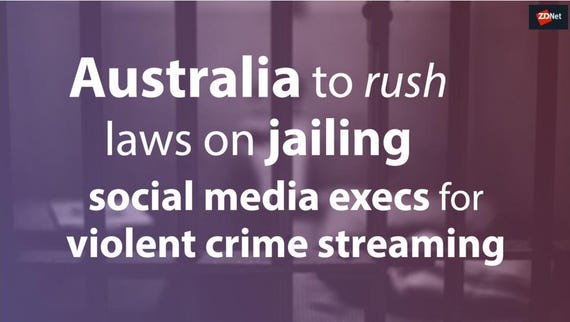 While the government is widely expected to call an election for May this Saturday, it is looking to rush through a set of new offences that would see Australia levy fines of up to 10 percent of a platform's global revenue, or see up to 3 years jail time, for the streaming of serious, violent crimes.

The proposed laws would cover "the playing or streaming of terrorism, murder, attempted murder, torture, rape and kidnapping on social media", the government announced over the weekend.

Social media platforms would also be required to notify the Australian Federal Police if they become aware that their site has been used to stream violent crimes. Should a notification fail to happen, fines of up to AU$840,000 for companies, and AU$168,000 for individuals, may be levied.

"Big social media companies have a responsibility to take every possible action to ensure their technology products are not exploited by murderous terrorists," Prime Minister Scott Morrison said over the weekend.

Morrison added that a new taskforce would be created between the federal government and social media companies to "deny terrorists the opportunity to use social media as part of their hatred and violence."

"These responses will form the basis of a model approach that Australia can take to the G20 to get our global partners on board to bring social media companies into our collective net of responsibility and accountability. We are already working to this end with our G20 and five eyes partners, including New Zealand."

The Criminal Code Amendment (Unlawful Showing of Abhorrent Violent Material) Bill 2019 would be modelled on existing arrangements requiring sites to notify police if it was being used to access child pornography, Attorney-General Christian Porter said.

"Mainstream media that broadcast such material would be putting their licence at risk and there is no reason why social media platforms should be treated any differently," Porter said.

The government flagged that it would look into introducing new laws after meeting with social media companies last week.

"This was an opportunity to dissuade the government from a view that legislation may be needed to deal with that emergent issue," Porter said last week.

"And I must say that as an effort to discourage us from that view it was thoroughly underwhelming."

Despite its removal, approximately 1.5 million copies of the video sprung up on the network in the first 24 hours after the attack. However, only approximately 300,000 copies were published as over 1.2 million videos were blocked at upload, the social media giant said.

Join Discussion for: Australia to rush laws on jailing social...