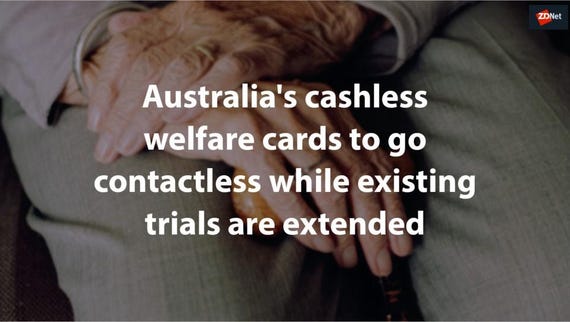 The federal government has announced contactless payments will be introduced to its Cashless Debit Card (CDC) trial, which is now being extended at existing sites until December 31.

In addition, Canberra said it will introduce a 1% interest rate on account balances where interest earned would be credited to accounts from June 2020, backdated to 1 July 2019.

According to the government, CDC card provider, Indue, is currently completing the required systems upgrade and replacement cards to allow for contactless payments to be available in "coming months".

"The government is committed to making sure the user experience for welfare recipients who are participating in the Cashless Debit Card trials is the same as anyone else if not better," Minister for Families and Social Services Anne Ruston said.

"The government is also working with the card provider Indue to give participants the option to tap their card to pay. Contactless payments have become a mainstream part of banking in Australia and it is important that Cashless Debit Card participants have access to this functionality."

Ruston added the six-month extension would help buy time for program participants as Parliament considers legislation to further extend the trials and use it to replace income management in the Northern Territory and Cape York.

There are currently 12,150 participants in the CDC trials across the Bundaberg and Hervey Bay, the East Kimberley, Ceduna, and Goldfields regions.

The CDC trial aims to govern how welfare recipients spend the money, with the idea being to prevent the sale of alcohol, cigarettes, and some gift cards, as well as block the funds from being used on activities such as gambling.

80% of the recipient's funds are placed on the CDC, which is managed by Indue, while the remaining 20% is paid into a bank account.

At the end of March, the federal government announced it had temporarily paused transitioning new participants onto the CDC after Services Australia, which is charged with oversight of the initiative, was inundated with a new wave of welfare payments in the wake of the COVID-19 outbreak.

The pause continues to remain in place, Ruston confirmed on Monday.

It was reported that those currently on the CDC will not be able to access the AU$750 coronavirus stimulus payment as cash, as it will be quarantined onto the debit card.

There will be no change to arrangements for existing CDC participants and support services would continue to operate business as usual, Ruston added.

During a recent hearing, Ruston and Department of Social Services representatives, including secretary Kathryn Campbell, were asked whether they might like to be moved onto the CDC themselves due to them "talking so favourably about it".

"I think there's a number of reasons we talk about some of the benefits of the CDC," Campbell said in response.