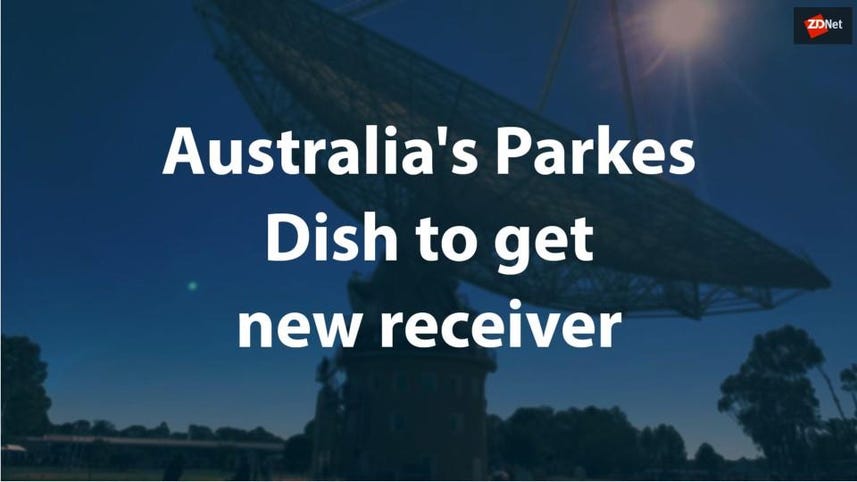 The Commonwealth Scientific and Industrial Research Organisation (CSIRO) will be upgrading the Parkes radio telescope, with The Dish to get a new receiver that has been touted will "significantly" increase the amount of sky that can be seen at any one time.

CSIRO said this will enable new science and support local innovation in the space sector.

The upgrade comes thanks to grants from the Australian Research Council Linkage Infrastructure, Equipment and Facilities (LIEF), which is funding the development of a new receiver for the Parkes radio telescope and a major upgrade for the Australia Telescope Compact Array near Narrabri in NSW.

AU$1.15 million from LIEF will support the AU$3 million project to build a sensitive receiver, called cryoPAF, for the telescope.

According to CSIRO, once complete, the new cryoPAF will sit high above the Parkes telescope's dish surface and receive radio signals reflected up from the dish. The new cryoPAF has three times larger field of view than the previous instrument, which CSIRO said will allow for quicker and more complete surveys of the sky.

"Its detectors will convert radio signals into electrical ones, which can be combined in different ways so that the telescope 'looks' in several different directions at once," the organisation explained.

"The new receiver will help astronomers to study fast radio bursts and pulsar stars, and observe hydrogen gas throughout the Universe," Lister Staveley-Smith from The University of Western Australia (UWA) node of ICRAR added.

Director of CSIRO Astronomy and Space Science, Dr Douglas Bock, said that in addition to boosting the capabilities of the Parkes telescope, the cryoPAF receiver technology has the potential to create spin-off opportunities.

"Their further development at radio wavelengths has technology applications beyond radio astronomy with the potential to fuel the growth of space-related industries here in Australia."

UWA will coordinate the construction and commissioning of the cryoPAF while CSIRO will design, build, and install the instrument.

There are five further research organisations involved in the project.

CSIRO said the existing digital signal processor will be replaced with a GPU-powered processor to double the bandwidth of the telescope's signal electronics.

"The upgrade will enable the telescope to study radio counterparts to gravitational wave sources, and it will enable it to make detailed observations of initial discoveries made with the Australian Square Kilometre Array Pathfinder and other Australian telescopes," said Professor Ray Norris from Western Sydney University.

Apollo 11 50 years on: A look at Australia's role in the moon landing

We have Australia to thank for that iconic grainy black and white TV image.

Stephen Slater spent a year digging into never-before-seen footage of Apollo 11, NASA's first moon landing. The results speak for themselves.

The overarching plan of the strategy is to triple the size of Australia's space sector and grow an additional 20,000 jobs by 2030.

Education
How to get a tech job with no experience

Professional Development
How long does it take to get a business degree?