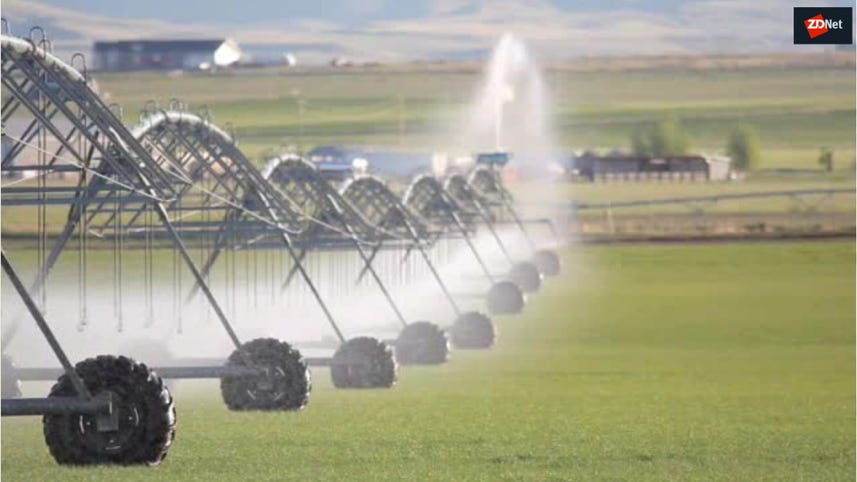 I've now made it a mission of sorts to write about concrete use cases of Internet of Things (IoT) technology, especially in industry. Luckily, in concert with Microsoft's Inspire partner conference, which kicks off today in Washington, DC, a new example has presented itself. The solution utilizes Schneider Electric's EcoStruxure platform, which I've written about before, and runs on Microsoft's Azure cloud, including its IoT offerings there.

The actual solution is based on SCADAFarm, the product of New Zealand vendor WaterForce, and is in use at that country's Blackhills farm. Blackhills started as a small farm but is nonetheless 990 acres in size and today manages 2,100 cattle, 800 sheep and 170 acres of kale, fodder beet and other crops. That's a lot of ground to cover, quite literally, especially since Blackhills relies on irrigation to supply water all around the facility.

Pivoting on water usage
The key device used for irrigation is called a "pivot." You can imagine how you'd need several of them on a farm the size of Blackhills. But this isn't just about numbers. It's about the weather, it's about the pivots' operational status, current moisture conditions at each pivot's site, and accordingly how much water, if any, each pivot should distribute, and in which particular direction.

In the pre-IoT era, such calculus required some application of hunch, and a lot of manual traversal of the farm to inspect the pivots as they ran. Making sure no area was insufficiently watered was important...and preventing water waste, though also important, may have suffered. Now, with SCADAfarm, Blackhills can monitor all of these conditions via real-time analytics, from a central location and can react accordingly, both to the need for water and the need to conserve it.

Such monitoring is made possible, of course, by IoT sensors on the pivots themselves. What's especially interesting in the Blackhills case is that the pivots were not manufactured as smart devices, but rather were retrofit with sensors after their acquisition.

It's in the platform
The SCADAfarm solution runs on Schneider's EcoStruxure platform which, in turn, uses Azure SQL Database, Cosmos DB and Stream Analytics, as well as other components in the Azure IoT Suite. Data is stored in the cloud, of course, and that's perfect for a farm like Blackhills that's likely not keen to run its own servers and data center. The SCADAfarm application itself runs on mobile devices, allowing Blackhills personnel to monitor the farm's irrigation systems from their phones.

SCADAfarm isn't merely a pivot monitoring system. It allows Blackburn to monitor water storage, alter watering plans, and keep an eye on spot electricity prices, to optimize when power is drawn for pumping, and take advantage when rates are lower.

Concrete, relevant, critical
With sustainable water usage becoming increasingly critical, farming can be a tough business. What more concrete scenario can there be for IoT, streaming data, analytics and the cloud than the Blackhills/SCADAfarm use case? It provides some hope that technology can lend a hand in combating the effects of climate change and increasing population, and it certainly demonstrates the efficacy and necessity for IoT.

Disclosure: Microsoft covered the cost of my hotel room in Washington, D.C. during its Inspire conference, to facilitate my attendance there. This post was written before the conference kicked off and before I knew of this subsidy.