Bad start for CNN app on Magic Leap One

The limitations of the form are on full display in legacy news company's new Mixed Reality app.
Written by Greg Nichols, Contributor on March 6, 2019 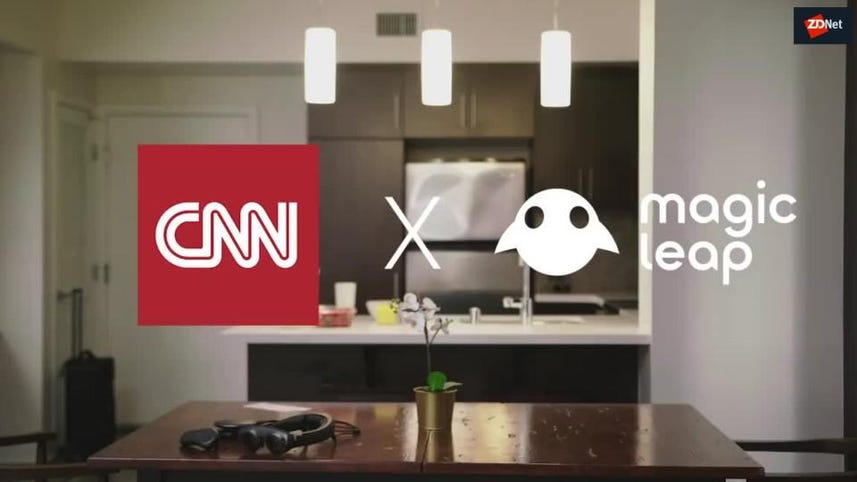 Magic Leap, in partnership with CNN, has unveiled a CNN app for its Magic Leap One. The new app brings streaming shows and on-demand content to the AR headset.

In its initial version, the app is essentially a roving TV set tuned to one network. It relies on Magic Leap's screens framework to project 2D video onto virtual screens. Users can pin the screens to walls or hang them in thin air around the house, which is presumably the only place you'd ever be casually donning your Magic Leap One googles. To get full access to CNN's content on the headset, pay tv users authenticate their cable subscription using a TV Everywhere model.

News channels seem like a natural fit for AR and Mixed Reality. The Weather Channel has pioneered the use of AR in its 2D TV broadcasts in oft-tweeted-about segments that pit on-air newscasters against harrowing simulated disasters. Weather Channel hosts brave on as the set floods or crumbles around them, breathing a newly visceral component into an often stale cable news genre.

Which is why the CNN app, at least in its debut form, is such a disappointment. The app follows news network Cheddar's stroll into Mixed Reality. As far as I can tell, the CNN's app is nearly identical to Cheddar's Magic Leap One app, right down to the promotional video featuring a hip twentysomething in a lavish apartment watching a lot of tv in a lot of rooms before running out the door, presumably to do something hip. Cheddar, at least, gets points for being first to market.

Where both apps disappoint is in their attempt to replicate the linear 2D TV watching experience on an AR headset. It's a sentiment beautifully summed up in a litany of eye-rolling tweets.

Why indeed does the woman in the CNN video not turn the television on as she sits down to breakfast in her living room? She's in the living room!

In fairness to CNN and Magic Leap, this is version one of what could evolve into a more immersive AR experience.

"CNN will be releasing new features soon that further showcase the immersive capabilities in spatial computing to give users more opportunities to explore, experience and engage with bolder forms of storytelling."

That's the kind of promise we've been hearing about Mixed Reality experiences for years. It's not for lack of potential that they haven't materialized. Think of how urgent a news network could make the reality of conflict zones by unlocking the interactive capabilities of Mixed Reality. Think of the effect that would have on our takeaway as viewers and citizens.

What about a feature that pulls up original carbon footprint reporting as you glance around the appliances in your home?

Features like that, of course, are going to take a massive investment on the production side, and so far CNN is signaling they'd rather dip a toe in AR by throwing some money at developers. For a network struggling to maintain relevancy in a bloated cable ecosystem, that lack of leadership is dispiriting.