When cord-cutting became a thing, it was all about saving money. Now, cord-cutting costs are catching up with cable.

Just Disney Plus is $13 a month with its must-watch package of Marvel Universe, Star Wars, and Disney films. Netflix is $13 a month, too. Plus, with internet TV streaming services such as AT&T TV Now, which costs $55 a month, your streaming bill can quickly get up to $80 or more, which is within spitting distance of a cable TV bill.

You can save some money by going with an inexpensive TV-bundling service like Philo TV. At $20 a month for up to five simultaneous streams of 58 popular channels -- including AMC, Comedy Central, Food Network, IFC, Nickelodeon, Science, and The History Channel -- it's a steal.

There are currently 11 good free services to try, and good old-fashioned over-the-air (OTA) antenna TV. Yes, you do have to put up with commercials on all of these -- and there's not a DVR features to be seen --  but they are free. With so many selections to choose from, I can guarantee you'll find something to watch that won't hurt your pocketbook by even a single penny.

There's a lot of good TV flying over the airwaves. 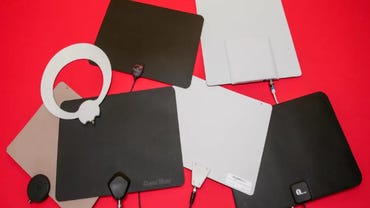 Of course, the cheapest way of all to get TV is with an old-school antenna for Over-The-Air (OTA) TV. If you've been using cable or satellite for the last few years, you may have missed that there are more OTA channels than ever.

In most places to use OTA, you still need antennas. If you're lucky you can still get a decent selection of channels with good old rabbit-ears. If not, towers and antennas are still available.

To find out what's available OTA in your neighborhood, start by going to a site like AntennaWeb or AntennaPoint. With their interactive tools, you can see what OTA channels are available to you.

Now there are differences between antennas. There is no one-size-fits-all antenna -- nor is there one antenna type that's better than any other. You need to look at what signals you can expect to get in your location and then look for the antenna that best fits your needs. For reviews see, CNET, AntennaWeb, and TechHive. In my experience, I've done well with Channel Master and Winegard antennas.

Roku: Cord-cutting on the cheap

A Roku gives you more than any other streaming hardware. 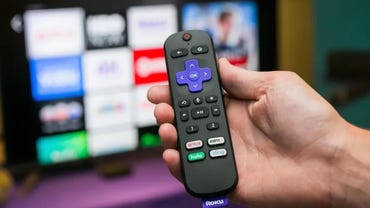 To access most of these streaming services, you'll need an up-to-date Roku streaming device. A big reason why I recommend Roku is it gives you access to more online-streaming services than any of the others. To find these, check out the Roku Channel Store.

For example, if you can't put up a TV antenna for OTA shows, many stations have their own local news Roku apps. These include FOX25 Boston, WSB Atlanta, and WGN Chicago.

In addition, there are literally hundreds of more obscure channels. Want to stream stuff for your cat? Your dog? Want to watch 50s TV shows? Practice yoga? Follow technology news with CNET? It's all there -- and it's all free.

There are also private Roku channels, which are not listed on the Roku Channel Store. To add these, you must manually enter their channel access codes. The best of these let you watch The Internet Archive's public domain videos. The best known of the private channels had been Nowhere TV with a hodgepodge of content, but it's no longer available.

While private channels can be fun, be wary of them. Roku doesn't support or vet these networks. Some content may be pirated, or they may disappear from one day to another. Still, it's fun just to explore, and you can find some great stuff you'll never see anywhere else.

Your library card might is a gateway to great free TV and movies. 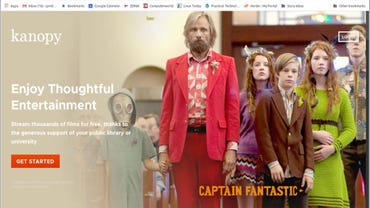 These first two -- Hoopla and Kanopy -- require you to have a library card with a library system that supports either of them. Their offerings aren't quite identical, but they both offer high-end movies and documentaries. They also come with a lot of PBS titles and The Great Courses (a personal favorite). Hoopla also offers ebooks and music, while Kanopy comes with movies from the Criterion Collection.

Unfortunately, you almost certainly can't get both services. And, I'm sorry to say, in some places you can't get either. Darn it! 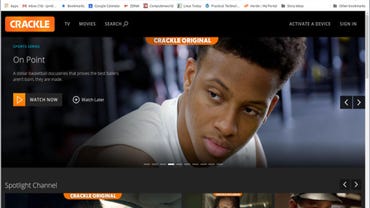 Crackle is perhaps the best-known free streaming TV and movie service. Crackle boasts TV shows and movies from the 80s through the 00s. Some recent selections include Bewitched, My Favorite Martian, and What's Happening.

You'll also find newer films on it sometimes. It also has a bit of original content such as StartUp, a dark show about technology companies. Call it organized crime 2.0. It's a hidden gem of a show with actors such as Martin Freedman, Ronald Perlman, and Adam Brody. Give Crackle and StartUp a try. 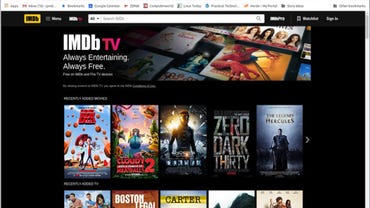 Everyone knows about Amazon Prime Video. It's a great add-on if you're already an Amazon Prime customer. But did you know Amazon also offers a commercial-driven free video service? Well, now you do. It's IMDb TV. This is a video-on-demand (VoD) service. It features older TV shows such as Boston Legal, Malcolm in the Middle, and Little House on the Prairie. And, since the M stands for movies, it also includes films such as Paddington, Spider-Man (the 2002 version), and Elf.

IMDb TV is only available in the US. It's also the only free channel not available on Roku. You can either watch it on your computer or with an Amazon Fire TV device.

A more obscure selection of TV shows and movies 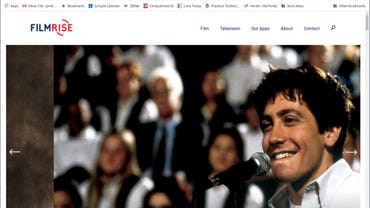 For another good free VoD network, check out FilmRise. Its movies tend to be more obscure, but it offers a good selection of popular TV shows such as Third Rock from the Sun, 21 Jump Street, and Roseanne. 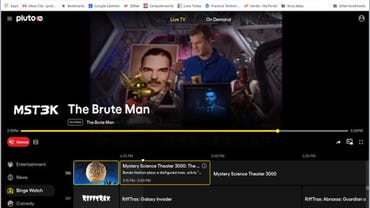 You may already know about Pluto TV. It offers access to dozens of other streaming networks with a single interface. Some of these "channels" aren't that interesting, but then there are others, like the classic Dr. Who, Mystery Science Theater 3000 (classic MST3K shows), and RiffTrax, which bring a smile to my face.

Since ViacomCBS bought Pluto, it also includes live TV shows such as CBS News and CNET. (ViacomCBS is the parent company of Pluto TV, CNET, and ZDNet). It also now includes free on-demand movies and TV shows. As of June 2020, these include Shaft (2019), Flashdance, and The Last Action Show.

Give it a look. Odds are you'll find something you like.

Roku now offers its own mix of free TV shows and movies. 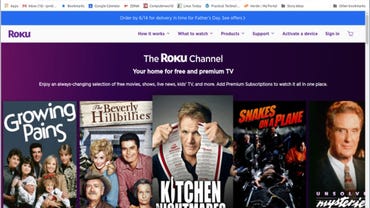 Roku is also offering its own network now: The Roku Channel. It borrows free movies and TV shows from other streaming networks and its own free content. It offers a mix of older and current TV shows and films. Some recent selections include Growing Pains, Trouble with the Curve, and The Beverly Hillbillies.

One interesting twist is you can watch these not only with your Roku but on the web via  The Roku Channel for the web. 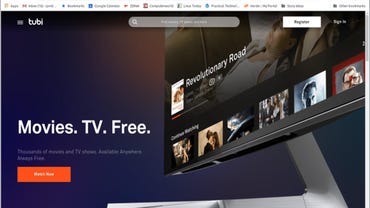 Tubi TV is one of the better free VoD services. It comes with perhaps the biggest video library of any of the free services, with over 20,000 titles. That's thanks to its access to Lionsgate, MGM, Paramount Pictures, and Starz Digital's libraries. Recent selections include Cloud Atlas, All the Pretty Horses, and FoxCatcher.

If you register, which I recommend you do, you can resume play from where you stopped to let in the cat. For a free service, where you often don't have control over the stream, that's a nice benefit. 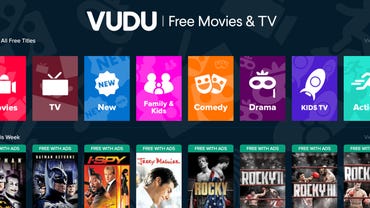 You probably know Vudu is Walmart's online rental VoD service. What you probably didn't know is it also offers free movies and shows with commercials. These are usually older, more family-friendly shows, such as Leverage, The Dresden Files, Fool's Gold, The Prestige, and Troy. For free, what's to argue with?

If you like Pluto TV, you check out Xumo and its obscure channels. 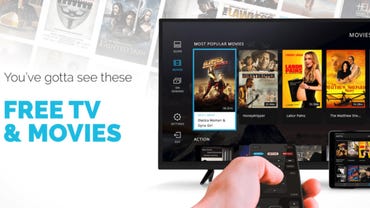 Xumo is a lot like Pluto TV. It has a wide variety of networks with an even wider variety of shows. If you're a golfer, you'll like that Xumo carries the PGA Tour's streaming channel. One nice feature is that as it learns what shows you like and offers you selections it believes you'll want to watch.

Stream selections from your own video library and online shows. 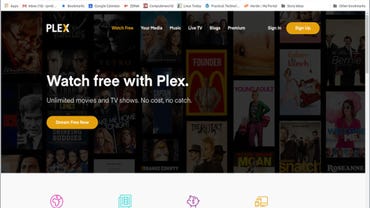 Last, but not least, Plex is best known for its software, Plex Media Server. You can use this partially open-source program to stream movies and TV shows from your own home video library.  But, starting in 2019, you can now use its internet service, without installing a thing, to stream TV shows and movies from its site.

It's still putting together its video library, but thanks to a partnership with Crackle and others, it now offers a good collection of TV shows and movies from that service and others.

As a longtime Plex user, I welcome this ability to both stream movies from the net and my own video collection.