Taylor Freitas is a freelance writer and has contributed to publications including LA Weekly, CNET, The Simple Dollar, and Bankrate. She holds a B.

Smart pens are the perfect compromise for when you want the ease of taking notes by hand and the convenience of digital recordkeeping. But with so many of these devices on the market, how do you choose the one that's right for you? It depends on what you're using it for.

These days, smart pens are designed with different purposes in mind, whether you want to convert handwritten notes into digital images, capture audio recordings, or mark up photos and documents. So if you're a student taking notes in class, your needs might not be the same as if you were an artist working on sketches.

No matter what you're looking for, you should be able to find the right smart pen in this guide. We've included all types of smart pens, including options for writers, editors, students, budget shoppers, and more. 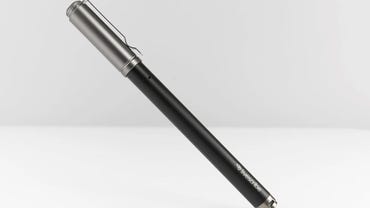 As one of the top brands on the market, Livescribe sells a range of smart pens, but the Symphony model is our clear favorite. From the user's perspective, the Symphony works just like a regular pen. As long as you have a compatible Livescribe notebook, you can use the pen to write and sketch by hand.

As you write, the Symphony's built-in camera will capture your notes in real time and store them in its 128MB internal memory (which holds an impressive 1,200 pages before it needs to sync). You can also connect your pen to your phone or tablet via Bluetooth to have your notes sync to the Livescribe+ app. Plus, you can send your handwritten notes directly to your cloud storage account (such as Google Drive, Dropbox, or OneNote). You'll get up to 10 hours of continuous writing from one charge.

The Symphony costs $110, which is about average for a smart pen. Keep in mind that you'll also need to buy a Livescribe notebook, which you can typically find for under $20. 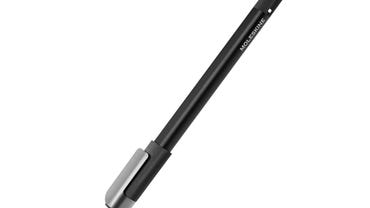 If you appreciate the look and feel of Moleskine notebooks, then the company's Pen+ Ellipse could be the right smart pen for you. Overall, it's a reliable smart pen that delivers all of the features that you'd expect, while bringing a bit of style to the table. In order to use the Pen+ Ellipse, you'll need to buy a special Moleskine notebook (as is standard with many smart pen brands). You can also purchase a bundled set that includes both products.

As you use the pen, it digitizes your written notes and ideas in real time, so you can instantly view them on your tablet, smartphone, or computer. From there, it's easy to upload or share your notes digitally through the Moleskine Notes app. You can also use the pen to record audio that lines up with what you've written, creating a multimedia note-taking experience. If you can't connect to Bluetooth, the pen has 100MB of internal storage that will hold your notes until the next sync. 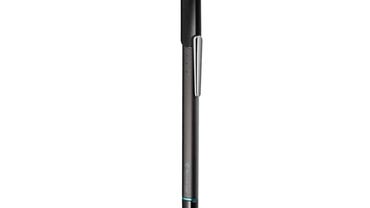 Neo actually produces the technology behind the Moleskine Pen+ Ellipse, but the two smart pens are quite different. We think that the Smartpen N2 is a worthwhile contender if you're looking for a durable pen that's compatible with a range of notebooks, planners, and other paper products.

The Smartpen N2 has a small built-in camera near the tip of the pen that reads your handwritten notes and converts them into digital files. Unlike many other smart pen brands, Neo doesn't require you to buy pricey notebooks. Instead, you can download sheets of special Ncode paper from its website for free (including multiple layouts and templates). But if you prefer the feel of a hardcover notebook, you can choose to buy one on the Neo website.

At $169, we think that the Smartpen N2 offers solid value for the money -- especially since you don't need to buy tons of expensive notebooks to go with it. Plus, the pen uses standard D1 tips, which are affordable and easy to find. 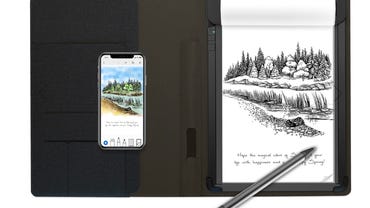 If you're looking for a simple smart pen and notebook bundle, the RoWrite Smart Writing Pad is a great all-in-one solution. We'd consider it a more budget-friendly option than many of the other smart pens on this list, but it still offers good functionality and features.

Unlike many of its competitors, the RoWrite pen doesn't have a built-in camera. Instead, it relies on sensors within the tip of the pen to track your notes and display them on your device via the RoWrite app. When you're connected to the app, you can edit your work in real time, save it for later editing, or send it to social media or cloud storage. It can even convert your handwritten notes into searchable text, making it easier to find keywords and important points.

The RoWrite Smart Writing Pad costs $90, which is a fair price for a smart pen and smart notebook package. One of the biggest selling points of this product is that it works with any kind of paper, so you can use whatever notepad you have on hand. 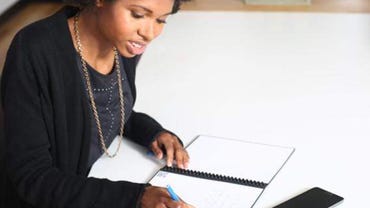 One downside of most smart pens is that they create paper waste -- but Rocketbook is the exception. It's designed with reusable pages that you can wipe off with a microfiber cloth after you've filled them and transferred your notes to the cloud.

The 32-page letter-size Rocketbook comes with a Pilot Frixion pen, which you can use to take notes and draw on the pages. You can also mix and match colored pens, highlighters, and markers from the Frixion range to bring your notes to life. Once you've finished, you'll need to scan each page with your smartphone and send them to your chosen cloud destination (such as Google Drive, Evernote, or iCloud). From there, you can merge, edit, and share your pages.

With a price tag under $30, it's hard to beat Rocketbook in terms of value -- as long as you're okay with scanning your pages to digitize them. It won't be the right choice if you'd prefer a smart pen that syncs your handwritten notes in real time.

What is the best smart pen?

The best smart pen is the Livescribe Symphony Smartpen based on its features, internal storage, battery life, and price.

How did we choose these smart pens?

We looked at several key criteria when choosing these smart pens, including features, functionality, technical specifications, and customer reviews. Once we had a shortlist of top smart pens, we narrowed it down further to include a range of price points, brands, and styles, with the goal of appealing to different types of buyers.

Which is the right smart pen for you?

In recent years, smart pens have become less popular due to the rise of tablets and touch-screen laptops, which make it easy to mark up documents by hand or with a stylus. As a result, many of the remaining smart pens share similar features, including built-in cameras to capture note taking, integration with cloud storage platforms, and voice recording. If you're looking for something like this, we'd recommend the Livescribe, Moleskine, or Neo smart pens.

However, if you're on a budget or don't need all of those bells and whistles, we'd suggest trying the RoWrite or Rocketbook products. They're both highly-rated items, but they don't include some of the more sophisticated features that you'll see on the other three smart pens.

What is a smart pen?

Similar to a regular pen, smart pens have ink and allow you to write, sketch, or doodle on a piece of paper. However, smart pens also have built-in technology (such as cameras or sensors) that memorizes each of your strokes and converts your work into a digital format (such as an image file, text file, or PDF).

Why would you use a smart pen?

There are several reasons that you might find a smart pen useful. For example, students often use smart pens to digitize the handwritten notes they've taken in class. Once they're digital, it's easy to search for key phrases and share notes with others. Smart pens are also popular with amateur and professional artists who prefer drawing on paper but also want to access a digital copy of their work.

Is a smart pen the same as a stylus?

No. Smart pens are actually quite similar to traditional pens since they contain ink and allow you to mark up paper. In contrast, styluses are designed to be used in place of your fingertip on smartphones, tablets, and other touch-screen devices. Artists often use a stylus to draw directly on iPads or foldable laptops.

Are there alternatives worth considering?

Outside of these five smart pens, there are also a handful of others that caught our attention. While they aren't as well-known as some of the products on this list, each one offers the key functionality that you'd expect from a smart pen. Here are two noteworthy alternatives to consider: