Digitization among small and medium businesses (SMBs) in Brazil has gathered pace as a result of the Covid-19 pandemic, according to a study published by software firm Intuit.

The study covered 1.128 business owners and decision makers in SMBs in June 2020 and has found that 49,7% are more digitally-enabled now than prior to the coronavirus crisis.

The pandemic has impacted 72.9% of the small businesses surveyed, according to the research, which has also found that only 30,2% had plans to invest in digital systems prior to Covid-19. However, these companies had to accelerate adoption of systems, mainly to enable tasks around collaboration and e-commerce. 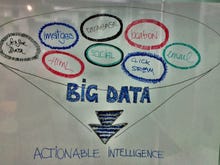 Think big data is too big for SMEs? Barcelona's out to prove you wrong The Catalan city has opened a big data center to accelerate business innovation - and hopefully become the most important data processing hub in southern Europe.

Improvements in customer relationships, as well as process agility and customer acquisition were cited as key benefits of digitization by 55% of the SMBs surveyed, followed by the ability to operate remotely, cited by 53,5% of those polled.

When it comes to challenges faced by smaller companies in the adoption of digital platforms, finding tools that can work well in any device was the main consideration, cited by 25,9% of respondents, followed by system interoperability (24,8%), changing existing processes (24.2%), affordability (23,8%) and data security (22,6%).

A separate study released in September by the World Bank, Facebook, and the Organisation for Economic Co-operation and Development on small business digitalization efforts has analyzed the efforts in that regard in eight global markets including Brazil, United States, Canada, Germany, Mexico, United Kingdom, Chile, and France.

According to the report, which used a digital maturity framework to understand and categorize the digitization efforts at SMBs, companies are placed in one of four sections ranging from the least mature, or Digital Indifferent, to Digital Natives, which are classed as digitally advanced businesses.

The study has found that SMBs in Latin America are less digitally advanced than their counterparts in the US, UK and Germany. These countries, along with France and Canada, appear in the second stage of digital maturity, the Digital Observers, while small companies in Brazil, Mexico and Chile were plotted in the Digital Indifferent initial stage of the index.

Challenges associated to that digital transformation journey cited by the respondents included as shortage of digital skills and insufficient budget, as well as cultural resistance to change. However, about half of the respondents expected that more than 30% of their business to be digital by 2021.