Broadband future: Why it will take more than billions to make gigabit speeds a reality for everyone

Sajid Javid pledged to spend £5 billion on supporting gigabit-capable broadband. But money isn't the only problem that needs to be tackled.
Written by Daphne Leprince-Ringuet on Oct. 2, 2019 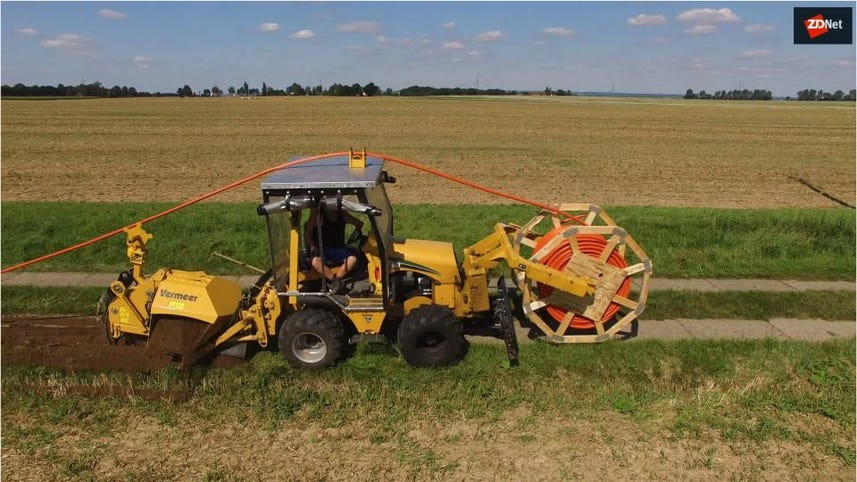 At the Conservative's party conference this week, the aim was to look optimistically towards the future, with Chancellor Sajid Javid announcing £25 billion for spending on new public infrastructure to provide support "for a post-Brexit future." And £5 billion-worth of that spending, he said, would go on rolling out gigabit-capable broadband in the hardest to reach 20% of the country.

Gigabit broadband, which offers a speed of one gigabit (1Gb) per second or more, is a big step up from a superfast broadband connection. That's what 96 per cent of households in the UK currently has access to – and to compare, Virgin Media's best superfast connection stands at 516 Mbps, or almost half as fast as gigabit broadband.

The reason, according to Culture Secretary Nicky Morgan, was the recognition that to push the highest broadband speeds out everywhere would require more spending than the market will provide on its own.

The government hopes that commercial gigabit broadband will reach 80% of the country, and that a £5 billion budget will provide for the 20% most remote areas that will end up outside the reach of private investment.

And so the Chancellor's announcement was presented as an opportunity to provide faster broadband for homes in rural communities, and support the growth of business in those areas.

This sounds ambitious – too ambitious compared to the budget put forward, according to the Labour Party, which highlighted that the total cost of building national gigabit connection through a full fibre network is estimated to be £33 billion.

The government named full fibre, 5G and "other high speed networks" as potential means to upscale broadband connections. Typically, though, speeds of 1Gb per second are achieved through full fibre, or a Fibre to The Premises (FTTP) connection.

Superfast broadband connects first to roadside cabinets, and then to your home through telephone lines - that's FTTC, or Fibre To The Cabinet technology. FTTP, on the other hand, has fibre lines running all the way into the property.

Building FTTP is complicated, and it is costly. You have to build new networks to connect each individual household, you have to dig up roads and pavements, and you have to lay miles of brand new fibre cable. BT, in fact, estimates that in isolated areas this could cost up to £4,000 per household.

Writing in The Daily Telegraph, Prime Minister Boris Johnson has called for the country-wide deployment of FTTP before 2025. But, even if only for the 20% hardest to reach in the country, will £5bn really be enough?

This is a question that has already been raised, if only because this is not the first time that the government has taken on the gigabit broadband challenge. Last year, Theresa May's government already set a target to build a UK-wide full-fibre network – by 2033.

Under that plan, it was forecast that by 2033 commercial broadband would have reached 90% of the country, and that additional public funding would be needed only for the 10% of remotest areas, instead of the government's latest target of 20%.

And, based on the Future Telecoms Infrastructure Review published the previous year, it was estimated that for that remaining 10% of households and businesses, public funding would cost between £3 billion and £5 billion of public money.

Now, Sajid Javid is announcing a similar budget – but the deadline is eight years earlier. And the proportion of the country that would need public funding to access gigabit broadband has doubled to 20%, which is about six million households. It's hard to see how that budget adds up.

This is one of the reasons why Tom Watson, Labour's Shadow Digital, Culture, Media and Sports Secretary, said the announcement was an example of the government's "half-measures," falling "far short of the ambition we need," adding, "Connectivity will underpin the jobs and economy of the future, but today the UK's digital infrastructure is lagging embarrassingly behind."

James Barford, head of telecoms research at telecoms and media analyst Enders Analysis, told ZDNet: "There were no formal announcements about the schemes that this money will go to. So you don't really know how much it can cost until the actual planning has been done."

It's not so much about the money, though. Regardless of the budget, adds Barford, getting full coverage by 2025 will be extremely difficult. That's because government budgets don't reflect the regulatory changes that are required for the smooth implementation of full-fibre broadband.

The Internet Service Providers Association (ISPA) made a similar point: "The calculation for this £5 billion of funding was estimated using the 2033 target, not the updated 2025 ambition. This puts an even stronger emphasis for the government to now combine this funding with urgent regulatory reform to the sector."

Last August, in fact, the ISPA wrote an open letter to the Prime Minister explaining that to reach 100 per cent full fibre, many regulatory barriers still needed to be removed.

SEE: Broadband: Three switches on 5G, but takes a different approach to rivals

Notably, it called for reform of the fibre tax, which still taxes fibre cables as if they were business buildings. Since the business case for full fibre involves a 20-year payback, changing the tax would be a way to relieve small businesses.

Barford agrees that regulatory reform is the key to accelerating rollout: "The regulations are not yet finalised as of yet," he told ZDNet. "We need government policies to get some business rates, and permissions to have a smoother implementation process."

The government has not ignored those recommendations, and is taking small steps. It has committed, for example, to introduce a bill on absentee landlords that would make it easier for broadband providers to get a wayleave agreement in the case that landlords don't answer their request to develop fibre on specific properties.

In addition to that, the ISPA outlined the necessity to use fibre connectivity as a standard when building new properties, and to invest more in digital and engineering skills to be able to compete globally.

Ultimately, though, analysts like Barford, as well as the ISPA, agree that change is not coming fast enough for a 2025 deadline. And that's not something that even £5 billion of public money can fix.