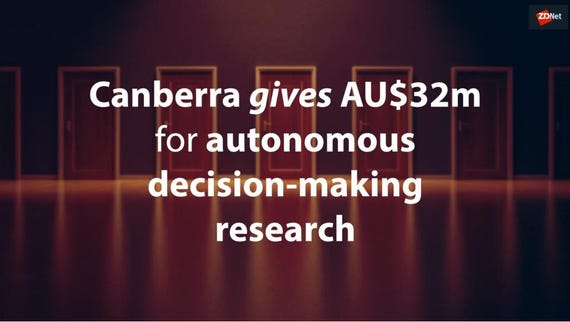 The Australian government has announced it is handing over AU$31.8 million to the Australian Research Council (ARC) to investigate responsible, ethical, and inclusive autonomous decision-making technologies.

The Centre of Excellence for Automated Decision-Making and Society, to be based at RMIT University and led RMIT professor Julian Thomas, will see RMIT researchers work with experts from seven other Australian universities, and 22 academic and industry partner organisations from Australia, Europe, Asia, and the United States. Together they will provide an additional AU$39 million in cash and in-kind support.

"[Automated decision-making] technology has great potential to transform the efficiency of industry, as well as public and private services, however, as with all technology, it is prudent to explore how to mitigate any possible risks," said Minister for Education Dan Tehan.

"Our Government is funding research into automated decision-making to ensure this technology provides the best possible outcomes for society and industry.

"Researchers will formulate world-leading policy and practice, inform public debate, and train a new generation of researchers and practitioners."

See also: How will autonomous vehicles affect your industry? (TechRepublic)

Thomas said the global research project would help to ensure machine learning and decision-making technologies can be used safely and ethically, particularly when it impacts other technologies such as artificial intelligence (AI), blockchain, big data, and automated systems.

"New systems offer enormous benefits in many areas, but they also pose substantial risks to our privacy and security, and to our welfare as citizens and consumers," he said.

"We urgently need a much deeper understanding of the potential risks of the new technologies, and the best strategies for mitigating these risks.

"Working with international partners and industry, the research will help Australians gain the full benefits of these new technologies, from better mobility, to improving our responses to humanitarian emergencies."

This comes after the federal government awarded a separate research centre, the ARC Centre of Excellence for the Digital Child, AU$62 million to examine the digital lives of Australian children from birth to eight years old.

Similar discussions about automated technologies have previously been raised by Data61, the digital innovation arm of Commonwealth Scientific and Industrial Research Organisation (CSIRO), which published a discussion paper earlier in the year that examined key issues raised by large-scale AI.

It highlighted that such technologies generate net-benefits, do no harm, comply with regulatory and legal requirements, appropriately consider privacy, boast fairness, are transparent and easily explained, contain provisions for contesting a decision made by a machine, and that there is an accountability trail.

The paper was developed to inform the Australian government's approach to AI ethics in Australia.

Technology challenges are standing in the way of Australian farmers: ACCC

The National Transport Commission has asked for a reform, requiring states and territories to agree to broad principles on limiting government collection, use, and disclosure of automated vehicle data.

Victoria to trial automated vehicles in partnership with Telstra and Lexus

On-road testing will get underway on metropolitan and regional roads soon.