Contact-tracing app: How much difference will it really make?

After a much-hyped debut, the excitement around the UK's coronavirus contact-tracing app has dipped. What happened?
Written by Daphne Leprince-Ringuet on May 29, 2020 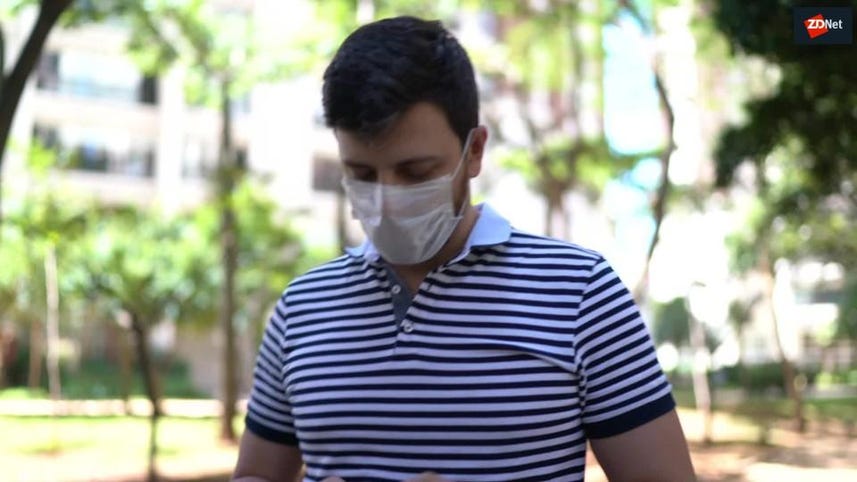 This week, the UK government launched a nation-wide "Test and Trace" program designed to actively track down and alert anyone who has been in direct contact with someone who has tested positive for coronavirus. The new service involves 25,000 dedicated contact-tracing staff, working their way through the social web of up to 10,000 sick people every day.

And despite much hype and anticipation, the new army of contact-tracers' work will not – as of yet – be supported by the NHSX's controversial contact-tracing app.

The app, which was initially planned to launch nationally in or around mid-May, is still being trialed on the Isle of Wight, and is not expected to meet its delayed official launch date on 1 June. And yet, from its early days, the technology was pitched as an essential pillar of the country's response to the COVID-19 crisis – a prime example of tech for good, and of a national push to relieve the NHS.

NHSX boss Matthew Gould, speaking before the Science and Technology Committee at the end of April, said: "If you want to keep your family and yourself safe, if you want to protect the NHS and stop it from being overwhelmed, and at the same time if we want to get the country back and the economy moving, then the app is going to be an essential part of the strategy for doing that."

If we got up to 60% of the population to use the app and stick to its advice to self-isolate or quarantine when necessary, we were told, then the virus's reproduction rate could be brought to under one, down from three – enough to stop the epidemic altogether, even if no manual contact-tracing was carried out in parallel.

Despite the delays, therefore, one would expect the communications campaign for the NHSX's contact-tracing app to have gone all out. In Australia, after all, even McDonald's and Hungry Jacks pushed notifications to their users encouraging them to download the government's Covidsafe app. But instead, the NHSX app seems to have gone off the radar for the past month or so; in fact, the latest official update on the organization's blog dates back to 8 May.

And the rhetoric has changed slightly. The government's announcement of the "Test and Trace" service does mention the technology, vaguely indicating that it is "due to be launched in the coming weeks"; but only states that it will form "a part" of the program.

While it is still suggested that the app will play a role in extending the speed and the reach of contact-tracing, some government representatives have in parallel downplayed the importance of the technology. Speaking this month in Parliament, junior health minister James Bethell said: "It is entirely right that test and trace does not need a digital app to be effective."

"The app brings many benefits (...) but it is not intrinsically necessary, and we believe that it would benefit from being introduced later, rather than earlier, than human-based tracing mechanisms."

From being "a core part" of the strategy, in the words of the NHSX's Gould, to "not intrinsically necessary", the app has suffered somewhat of a downgrade. Or, at the very least, the spiel has changed. For Ross Anderson, professor of security engineering at the university of Cambridge Computer Laboratory, the hopes initially placed on the app might have been misplaced.

"My own feeling is that the NHS app isn't going to make much of a difference anyway," Anderson told ZDNet. "It's something that Matt Hancock announced prematurely on Easter Sunday. What we need is contact-tracing that actually works."

Since its inception, the NHS contact-tracing app's journey has not been the smoothest; in fact, the technology has already run into a number of difficulties. It's not only about the delays: from the start, the UK's health services decided, in contrast to the majority of other European countries, to develop a technology separate from the decentralized approach put forward by Apple and Google.

The tech giants have released a contact-tracing API that, sticking to the imperative of "privacy by design", enables every operation involving privacy to happen on users' phones, rather than through a central database. The NHS, on the other hand, deemed it preferable to centralize data in order to better control the tool, and to be able to run analytics on the data to understand the spread of the disease.

The debate surrounding the perks and drawbacks of centralized and decentralized protocols is ongoing, but one thing is certain: from a technical point of view, using Apple and Google's API makes it easier to integrate a newly-developed app with users' phones, which are most likely to run either iOS or Android.

From the several thousands of downloads of the NHS's contact-tracing app that have been registered from the technology's trial on the Isle of Wight, there have been mixed reviews. Some reports have described the app draining battery life on older phones, and potentially sending out false alerts.

It also recently emerged that the UK government had contracted private company Zuhlke to investigate whether the technology could be switched over to Apple and Google's API. In a £3.9 million contract released at the start of the month, Zuhlke was tasked with investigating the "feasibility" of implementing the tech giant's protocol within the existing platform.

Without any official insights about the current trial underway on the Isle of Wight, it is hard to know the extent of the technical glitches. And equally, some users have reported a positive experience with the technology. Matt Middleton-Leal, a resident on the Isle of Wight who said he had downloaded the app "from day one," told ZDNet that his experience of the technology had been positive.

"You literally go to the website, click on the link, it downloads to your phone, asks for the four first digits of your postcode, and you're ready to go," he said. "I've not had any problems with it, nor has anyone that I know. It's incredibly simple to use."

Oxford University's Nuffield Department of Medicine, which developed the model for the app, is closely monitoring the trial and confirmed that the delays in the technology's launch were only due to fine-tuning the tool so that it can be ready for national deployment.

"Valuable results are being gathered from the Isle of Wight," David Bonsall, senior researcher on the mobile contact-tracing programme at Oxford University told ZDNet. "The NHSX team are fine-tuning the app that will be integrated fully into the national test, trace and isolate program. The app will still form a core part of the government's strategy – we're hoping it will be ready to launch in June."

In a press conference earlier this week, the health secretary Matt Hancock again denied that technical glitches were the cause of delays, and maintained that the test version of the app is working well. But Hancock also said that, from the trials on the Isle of Wight, the government has drawn some apt conclusions: namely, that contact tracing works better in its human form.

Designating the technology as "a compliment" to the new "Test and Trace" system, the health secretary emphasized that despite the benefits of a contact-tracing app, the new 25,000-strong army of contact tracers would actually be successful without the help of a digital equivalent.

Around the world, over 30 digital contact-tracing systems are in the works, and for very good reasons put forward by experts. An app can ramp up the speed at which users are warned, and alert those at risk even before they show symptoms and become infectious. The technology can also fill in the gaps of manual contact-tracing: you wouldn't remember, and let alone know the name, of the person you stood next to on the bus, or queued after outside the supermarket. A Bluetooth connection, however, could find them out in no time.

At least, that's the theory. In practice, contact-tracing apps simply don't seem to work all that well. Often referred to as evidence of potential shortcomings is TraceTogether, a contact-tracing technology developed in Singapore, and which now has about a million users. Since it launched, Jason Bay, one of the creators of the app, has publicly declared that "automated contact-tracing is not a coronavirus panacea", partly because of the number of false negatives and false positives generated by the technology.

The other issue, he added, is the stubbornly low uptake: with about a fifth of the population having downloaded TraceTogether in Singapore, there is only a 4% chance that two people who come into contact will both have the app.

In Australia, just under a quarter of the population has downloaded the Covidsafe app. Judging by the numbers from other countries, therefore, it seems unlikely that the 60% target originally mentioned by the healthcare services in the UK will be met.

NHSX boss Matthew Gould previously described a 60% level of download as "optimal"; but now, the scientific team behind the app's model has revised the number. Oxford University's David Bonsall told ZDNet that new results suggest that the app will have an impact "even at low levels of uptake". For example, he said, if a small community of friends and family all download the tool, the protective benefits of the technology will be felt across the local network.

It remains that countries that have most effectively fought back against the pandemic, didn't make a name for large-scale contact-tracing apps. South Korea, for example, while avoiding strict lockdowns, has managed to keep COVID-19-related deaths under 300. The secret to success? Good old manual contact-tracing, minus privacy concerns.

When a person tests positive for coronavirus, South Korean contact-tracers have access to information that is typically made available to law enforcement, ranging from credit and debit card transactions, to phone location, through to surveillance camera recordings. While such methods might not be picked up in the UK, the University of Cambridge's Ross Anderson stressed that some lessons could be learned from South Korea's response.

"In South Korea, they've dealt with COVID-19 much better because they have used traditional approaches of testing and contact tracing, which is how we have been dealing with epidemics for a hundred years now," said Anderson. "The best thing to do here is manual contact tracing."