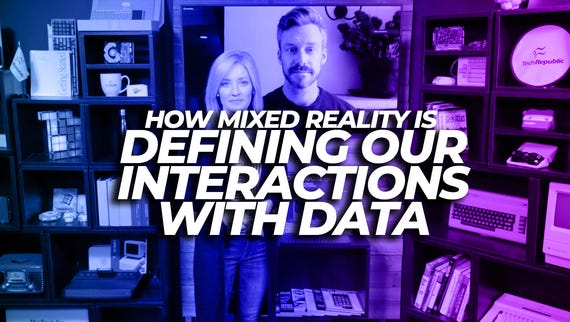 Imagine tapping into a raw data feed from a distributed network of IoT devices in a logistics center. The center is full of robots, employee work stations, and shipping and receiving docks. The data coming back contains important information about machine performance and operational efficiencies. Reading the data correctly will reveal important opportunities to increase productivity.

How do you begin to make sense of it?

Before IoT and analytics tools, data fit nicely on a spreadsheet and could, with a little imagination, be exported visually in a chart or graph. Now, in the age of Big Data, the job of reading data often falls to data scientists who apply models to extract useful insights from large data sets. Companies that don't employ data scientists may use third-party Software-as-a-Service products to churn through data.

But what if there was a way to visualize huge data sets that instantly revealed important trends and patterns? What if you could interact with the data, move it around, literally walk around it? That's one of the lesser talked about promises of mixed reality. If developers can deliver on the promise, it just may be one of the most important enterprise applications of those emerging technologies, as well.

Though it's early days, augmented reality and virtual reality could fundamentally change the way we interact with and interpret data. Coming on the heels of the big data revolution, 3D visualizations in mixed reality are the right tool at the right time to help decision-makers understand and glean insights from huge data sets. The technology will unlock the power of big data in realms as disparate as community health & medicine, agriculture, board rooms, and governments, and it could hasten adoption of enterprise AR/VR, which has had a rocky reception so far.

Data Visualization, the modern offspring of a field known as Visual Communication, has had an outsized impact on our relationship with information. Edwart Tufte, one of the fathers of modern data visualization, summed up the pursuit in his 1983 book The Visual Display of Quantitative Information: "Excellence in statistical graphics consists of complex ideas communicated with clarity, precision and efficiency."

The concept isn't new, as anyone familiar with Charles Joseph Minard's 1869 diagram of Napoleonic France's invasion of Russia will be aware. The visualization depicts the attrition of Napoleon's army over time and geography in a way that's strikingly easy to comprehend.

But the late 20th century and early 21st centuries saw an explosion of creativity and innovation in the field. Designers, data journalists, and statisticians—aided by computers and prompted by the need to accommodate the information overload of the internet age—have brought about a data visualization renaissance. Using clever data presentation, it's possible to understand large data sets at a glance. The result for decision makers is a reduced risk of cherrypicking data points and an increased ability to make data-supported decisions without the prerequisite of a statistics degree.

Here's the problem: The Big Data revolution of the last decade has yielded too much data too quickly for many enterprises. That's thanks to those distributed Internet of Things sensors, for example, that are capturing data on how machines perform.

According to Cisco, just 26% of companies in a recent survey reported that their IoT initiatives have been successful. Worse, less than 1% of unstructured data is analyzed or used at all.

Data scientists apply lots of sophisticated models to interpret data, and models are now being created by artificial intelligence, as well, to go deeper into data sets and derive insights. But when it comes to most humans, the people who actually have to use data to make decisions, there's broad consensus that we just haven't been very good at making all of this captured data useful and accessible, at least to those lacking statistics degrees.

Data visualization in VR and AR could be the next big use case for the technologies. It's early days, but examples of 3D data visualizations hint at big changes to come in how we interact with data.

Recently, I spoke with Simon Wright, Director of AR/VR for Genesys, about one such experiment. Genesys helps companies streamline their customer service experience with automated phone menus and chatbots, for example, but in his role Wright has a lot of latitude to push the boundaries of Mixed Reality technologies for enterprise customers.

"One of the things I'm personally excited about is the ability to create hyper visualizations," Wright tells me. "We capture massive amounts of data, and we've created prototypes to almost magically bring up a 3D model of Genesys data. This is where there could be huge opportunities for AR, which has advantages over a 2D screen."

For one recent project, Wright and his team wanted to project data pertaining to website analytics onto the wall of a restaurant in a beautiful way. "It started as a marketing-led project," he explains. The idea was to use the data derived from the restaurant's website as an art piece for diners.

"It looked lovely, looked beautiful," according to Wright. "We went from that to thinking about the user interface."

That prompted the team to ask a question: Is there a way to create a 3D model that a user can interact with? More to the point, how do you represent more than two million website contacts in a useful way?

The engineers decided to give each datapoint a direction, a velocity, and a mass. All of a sudden the static picture began moving in a way that lent meaning to the data, coming alive in front of the user. The familiar physics applied to each data point made the entire picture easier to interpret.

The team initially captured all this moving data in a video. But when the team created an AR interface using a phone, they realized they had unlocked a powerful interactive tool. Users could hold up their phones and see data zooming around the room. They could visualize where website visits were coming from geographically, for example, at different times of the year. The user was less dependent on a static data model and more able to engage the data in order to make sense of it.

That bit of experimentation opened Wright's eyes to the utility of AR/VR in unlocking the power of data. "It's a game changer," he says, adding that the ability to do multi-player, collaborative visualizations will turbo charge the technology.

One of the big knocks against mixed reality is that right now it's largely a single player experience. In the age of social technology, that's a huge stumbling block.

But Data Visualization is a huge opportunity on the technology side for developers to create and sell multi-player immersive mixed reality experiences. One of the leaders in the space is a company called Virtualitics, which offers 3D data sets that multiple users can experience and manipulate at the same time.

According to a spokesperson, the "collaborative 3D environment links data with natural human pattern recognition to uncover multidimensional relationships in data, extracting actionable knowledge that may not be discoverable by any other means."

Scatter plots are one example of information-rich 3D visualizations enabled by Virtualitics.

2D scatter plots typically contain only two or three metrics. Visualizing multivariate data with 2D scatter plots usually requires using many of them -- such as with a scatter matrix -- which can overwhelm an
observer and obfuscate patterns in the data.

Virtualitics solves this problem by using 3D scatter plots, which allow you to combine five or six different metrics at once. All the information from multiple 2D scatter plots can be combined into a single, easily understood graphic.

Virtualitics also embeds geospatial data in immersive 3D maps. For example, data on worldwide global company valuation for a subset of the market, on historic seismic activity in the Pacific Ocean, or on price volatility for various companies can be projected onto a globe, creating representations that rely on familiar visual touchstones to ground data.

In both cases, the visualizations can be shared quickly and seamlessly across an organization. It's easy to imagine how this can help data escape traditional silos and reach decision makers on the ground.

One example Virtualitics shared with me concerns a large hospital chain. The Hospital needed to predict why some patients were going back to the hospital after being treated for septicemia. It was difficult to understand patterns in the data given the large number of patient metrics that were being tracked by the hospital. The Machine Learning team at Virtualitics built a predictive model that improved re-admittance prediction for septicemia, and the company used the Virtualitics platform to visualize and explain the model to caregivers. That portability and accessibility is a big selling point for mixed reality visualizations.

Another company, DataView VR, is leaning into the collaborative aspect by powering immersive data presentations. A spokesperson for the company offered the following metaphor for their data visualization environment: Imagine hovering above a forest with your colleagues. You can clearly see the entire forest. You can also look down and see each tree, and every tree has six clearly recognizable dimensions of data. Anyone viewing the presentation can focus on any one or combination of those dimensions and visually recognize patterns in the forest. Your colleagues floating beside you can add new datasets, new variables, and you can work together to really understand your data.

Similarly, a company called 3Data offers tools to create powerful AR data projections in real world environments that teams can use to collaborate -- imagine a building rising from a table that can be taken apart piece by piece to unlock data insights. 3Data offers a virtual meeting space where distributed teams can come together and view and work on data projections as if they're standing in the room with one another.

Though mostly confined to video games and kitschy apps, the projection capability of augmented reality can be leveraged for powerful data visualizations. Extending the hypothetical posed at the beginning of this piece, imagine looking at a factory floor through a HoloLens and seeing visual representations of the data that's being captured by your company's IoT devices.

You would see your entire production chain and have a visual signpost for operating efficiencies and inefficiencies as measured in real time. A gauge above a workstation, built using IoT data, would tell you where you're losing time or money, for example. A battery life indicator could indicate when a piece of machinery likely needs servicing.

This intersection of VR and AR with Big Data also represents incredible creative opportunity. Visual Communication and data visualization started to gain recognition as an art in 90s and early 2000s, and if the innovation we've seen in the field is any kind of template we're going to see some just mind-bending stuff coming down the line.

This is already happening in the form of stunning visual metaphors. Churning oceans symbolizing deep pools of data could use wave height and water color signifies variations and uncover patterns. Cityscapes and nebulas will cluster information and help humans gain some purchase when approaching data that otherwise wouldn't make much sense.

Join Discussion for: Data visualization via VR and AR: How we'll...