Full Bio
Posted in Between the Lines on February 8, 2021 | Topic: 3D Printing 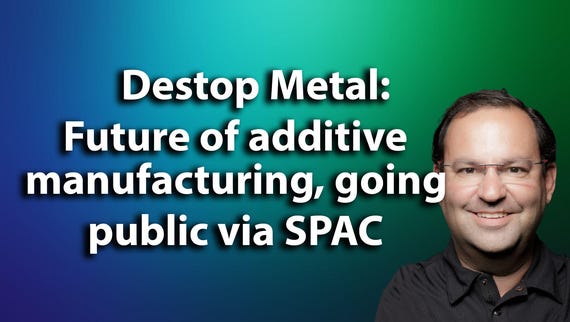 I caught up with Fulop to talk about how the 3D printing industry is developing. Here are some of the key takeaways from our conversation.

Here's where we are in terms of global adoption. Manufacturing is a $12 trillion market. Additive at the end of last year was $12 billion. So, it's 0.1% penetration. This is like being in the semiconductor industry in the early 70s.

Bringing manufacturing back to the US. Fulop said that 3D printing today is focused on the parts, but in the future, there will be economies of scale to make complete products in a way that's more environmentally and economically friendly. Fulop said:

We set up our global trade system where people charge tariffs when things go in and out of places. And what additive disrupts is it creates a new modality to ship products. Today you ship things by air, land, and sea, and in the future, you'll ship them digitally and produce them locally. And you could mass customize to a local environment.

That's a huge borderless production arc of growth that probably would take 30, 40 years to really pan out. But it's in the beginning stages, and it's massive. The ability to send things digitally and print them locally, I think that you will have more final assembly in goods locally to market. The good news is that (additive) creates a lot of efficiency in terms of the way that products operate. They're lighter weight, they're cleaner manufacturing, there's less waste. And it opens up the possibility to re-shore.

Biofabrication is split into two areas, you've got printing with cells and printing without cells. Just the printing without cells for, let's say, cartilage, meniscuses, people are printing corneas, those types of body components. Vascular grafts, things like that. To create shapes that would have been impossible with conventional manufacturing or very difficult or use materials that would be difficult to make with conventional approaches. Just those things alone are a really great long-term application in the printing space that a few people really truly understand. Today that's a zero billion dollar business, but I think that we'll exit the decade with a large business in biofabrication.

I think it makes it easier to do hardware development. Printing definitely simplifies and lowers your barrier to entry. In the past you had to spend money on tooling and... Let me put it this way. It's the same thing as serverless and cloud... What serverless and cloud has done to enable somebody to just pull up a web service very easily. Whereas before in the 90s, you had to buy a data center, co-locate your rack in there. That was a major expense in launching a web service.

Here with additive, the cost of one part is almost the same as the cost of 10,000 or 50,000. So, you can go-to-market much lower cost and you could change the design up to the last minute with much lower cost. On the photopolymer side, we've got toy companies launching toys, and you have no idea that parts of the toy were printed.

And that lowers the barrier to entry for testing whether something's going to be a hit or not. I would say that it's definitely an enabler for entrepreneurship.

We would've done a traditional IPO. I've done an IPO before with all the bulge bracket banks, and that experience was great. You get handhold at a little bit more when you do a traditional IPO, but I have to say the SPAC process opportunity presented itself and it accelerated. But we were going public in two years, we accelerated. And I think it's opened up a lot of degrees of freedom for our company. I'm super excited about what we've got in store in front of us. It's accelerated our growth, and I've had several friends that have done the same thing, it's been a good experience for them. It is not easy to do. It's harder than it looks. I think people see it and they think, well, I can do this. But definitely you need to have the goods to pull it off.

It allows us to get to our full vision of end-use part mass production across multiple modalities faster. We're very excited about where we're at today.