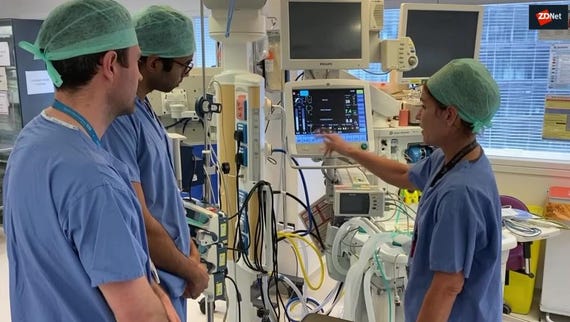 You can print a lot of things with a 3D printer. A gun, a home, a dinner. Soon, you could even print new pieces of yourself.

While most uses of 3D printing involve extruding layers of plastic through a nozzle to create a three-dimensional structure, before too long, similar technology could let physicians print structures made of human cells -- from tiny structures like 'organs on a chip', to huge ones like whole replacement organs.

"Bioprinting has a great promise -- it has a lot of advantages and capabilities. Of course, it's not really perfect yet, but despite that, we have all these good things going on in the field," says Dr Ibrahim Ozbolat, principal investigator at Penn State University's bioprinting-focused Ozbolat Lab.

One of those things is making replacement organs. The process of bioprinting human tissue is a bit more involved than, say, 3D printing a new desk toy. First, you have to get some stem cells from the person who needs the new organ, culture them in the right biochemical soup until you've got enough, then turn them into a bioink that can be extruded through a nozzle that's two microns thick (or one 80th the size of a human hair). The bioink will be pushed through the printer, usually onto a scaffold made of hydrogel. A bit more culturing, and you could have a useable tissue that can either be printed directly onto the patient in an operating theatre, or built in a lab and then implanted.

Bioprinting isn't a fast process, but it could make a substantial impact in healthcare, not least in offering a solution to the chronic shortage of donor organs. In the US, for example, there are over 112,000 people still on transplant waiting lists.

Other than there simply aren't enough of them, another problem with donated organs is that recipients' immune systems can attack them, causing the donor organ to fail. If that doesn't happen in the first few days or weeks, it will eventually -- kidneys donated from living donors tend to last around 12 to 20 years. People with transplanted organs also need to take medication to suppress their immune system long-term. While those drugs lessen the chance of organ rejection, it also leaves those taking them at risk of other diseases such as certain cancers.

Bioprinted organs made from an individuals' own tissue won't be rejected by their body, will last far longer, won't need anti-rejection meds, and can be custom made to the individual's exact measurements -- whether they're a four year old or a NFL linebacker.

That's the goal, anyway. So far, most human organs that have been made in the lab and not got as far as being implanted into people. Not all human organs are created equally -- or can be created by bioprinting, for that matter. Flat tissues, like skin, and hollow ones, like the stomach or bladder, are relatively easy to print, whereas complex solid organs -- the heart, liver, or pancreas -- would be far harder to recreate with printing due to the rich blood supply they need.

The problem, according to Dr Anthony Atala, director of the Wake Forest Institute for Regenerative Medicine, is the blood vessels of larger bioprinted organs.

"Vascularity still remains a challenge because there's so many cells per centimetre [in large organs like the heart] that you really need a lot of vascular supply and nutrition. So to create the large structures is still a challenge, even though the printer is definitely helping in that area, but we're not yet ready."

The bigger an organ is, the more blood supply it needs to bring organs and nutrients to the tissue. Large organs need a complex web of interconnected, different-sized arteries, capillaries, and veins. The walls of the vessels need to be strong enough to withstand the normal flow of blood through them without causing clots, and need to be made of specific layers. For now, it's too much complexity for 3D bioprinters to manage.

While researchers are working on how to print full-size organs, the tiniest bioprinted structures are already helping researchers. Bioprinting can also be used to make 'organs on a chip' -- tiny samples of tissue that mimic the functions and structures of their full-grown counterparts. These mini organs allow pharmaceutical companies to test drugs on versions of human tissues, and assess their effectiveness or toxicity instead of using unreliable and ethically difficult animal models.

One day, organs on a chip could be made using individuals' own cells to test potential therapies. Rather than using the same standard treatments for every patient, by taking some cells, culturing them and printing them onto the chip, physicians can have a unique view into how their patient will react to a particular drug without having to start them on a whole course of it.

SEE: Coronavirus and 3D printing: How makers are stepping up to supply vital medical kit

As well as printing healthy tissue, bioprinters can make samples of diseased tissues -- like cancers -- to investigate current and future therapies.

"We're trying to find a way to create an effective treatment for solid tumours. I work with immunologists [who] engineer immune cells and make cytotoxic cells against the cancer cells. Now we're trying the immune cells in different 3D models that we print or we build. This could be used as a pre-screening tool for immunotherapy: so rather than directly going and checking things on the patient, this will be an intermediary step to screen the effectiveness of the therapy," Penn State's Ozbolat says.

And that's not the only way that bioprinting -- or rather, BioPrinters -- could help develop new therapies for common health conditions.

While HP's printers are more associated with offices rather than labs, HP also sells printers to the life sciences industry with its D300 BioPrinter line which prints drugs instead of documents. The machines are typically used in small to medium pharmaceutical companies in secondary drug discovery, where compounds thought to be effective against a particular disease are tested to see if they have any affect against the condition, and if so, at what dose.

The life sciences printer came into being, according to Annette Friskopp, global head and general manager of Specialty Printing Systems at HP Inc, after a group of HP engineers began researching the highest value fluid in the world that could be jetted through a thermal inkjet print head or similar. Was it perfume, jet fuel, rare chemical compounds?

"One of the highest value fluids that they discovered in this exploration was drug compounds… If you've ever printed a photograph on an HP printer, just think of how many small droplets of ink have to directionally be sprayed down onto that piece of paper, so when the photograph comes out of your printer, there's your friends and family. Leveraging exactly that same technology, that is [drug] dispensing using thermal inkjet technology," she says.

Viiv Healthcare's David Irlbeck has been using HP's D300 in his work to create latency reversal drugs for HIV. (Latency reversal involves changing an HIV infection from its latent phase to an active one, the body can mount an immune response against it, and is thought to be a promising avenue in the search for a cure for HIV.)

Viiv uses HP's D300 bioprinter for measuring out very small, very accurate amounts of particular compounds to see how their effectiveness changes at different doses. The machine is, says Irlbeck, "very user friendly, very easy to program, and it can do titrations that would be extremely difficult to do manually". By having a printer print out the drugs, researchers are able to get them down to finer and finer concentrations that human researchers simply wouldn't be able to make by doing the same process by hand, and would likely be less accurate if they did. And, because printers can measure out doses of drugs at tiny and highly accurate concentrations, it allows pharmaceutical researchers to reduce any wastage of the (very expensive) compounds.

Bioprinters also enable researchers to combine two drugs in very precise concentrations to see if they might have a synergistic effect -- where the two drugs together might have a greater effect than that which both produce individually. "It's very, very technically demanding to do synergy work without an instrument like the D300," Irlbeck adds.

As well as working on HIV medications, the D300 was recently co-opted into working on treatment for SARS-CoV-2, the virus that causes COVID-19, prepping drug plates for a lab at the University of North Carolina, which was looking into their antiviral potential.

The bioprinters are also being used elsewhere in the fight against coronavirus. HP has donated four of the D300e BioPrinters to four research facilities working on COVID-19: the Spanish National Research Council, the Monoclonal Antibody Discovery Laboratory at Fondazione Toscana Life Sciences in Italy, the US Center for Nuclear Receptors and Cell Signaling (CNRCS) at University of Houston, and France's Grenoble Alpes University Hospital. Between them, the facilities are using the machines for research into the fundamental biology of COVID-19, monoclonal antibodies and other potential therapeutic candidates, and work on immunisation: the future of healthcare is likely to be 3D printed.

Join Discussion for: 3D printing is making a giant leap into health....