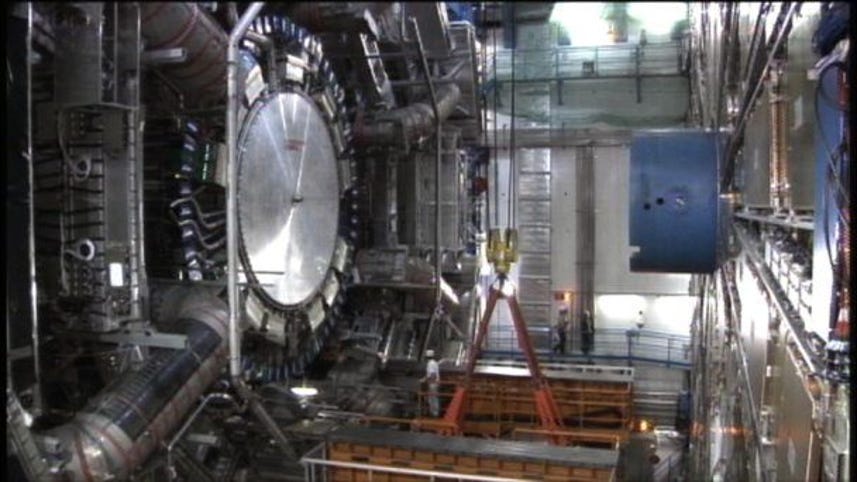 For the past five years, Antonio Pellegrino has been working on a high-pressure job: the scientist is leading an upgrade to the largest and most powerful particle accelerator ever built, which sits one hundred meters beneath the Franco-Swiss border at the European Organization for Nuclear Research (CERN).

Commonly called the large hadron collider (LHC), the accelerator is a 27-kilometer-long ring in which particles such as protons and electrons are projected against one another at high speeds, recreating the conditions that existed one hundredth of a billionth of a second after the Big Bang – all for modern-day scientists to observe thanks to various high-precision detectors that sit inside the accelerator.

LHC was put on hold in 2015 for engineers and physicians to find ways to improve the accuracy of the accelerator's detectors. The end-goal? Nothing short of understanding matter and getting better insights into the origins of the universe.

To do exactly that, Pellegrino turned to a technology that is currently used to design products ranging from food and fashion to human cells: 3D printing. Thanks to a partnership with technology company 3D Systems, some parts of the LHC have been springing out of 3D printers, as part of the design of the accelerator's detectors' cooling system. Crucially, the printed parts can meet stringent requirements for the components to be wafer-thin without compromising on resilience – conditions that would have been near-impossible to meet with traditional manual processes.

"An interesting combination of problems led us to 3D printing," Pellegrino tells ZDNet. "We spent two years trying to build a prototype that fulfilled our requirements, only to realize that it was simply too work-intensive, and not reproducible enough. That's when we started thinking that perhaps 3D printing could be an option for us."

From an option, 3D printing became the solution. 3D Systems' printers were successfully used to produce extremely light titanium bars, with a width of 1.6 millimeters and wall thickness of 0.1 millimeters. The bars will be fitted onto the detectors, and will be used to cool the system down to -40°C, to make sure that the results aren't altered by heat disturbances.

Pellegrino's work focuses on a specific type of LHC detectors, which are used for a study called the Large Hadron Collider beauty (LHCb) experiment. The research looks at a type of particle called the beauty quark, to understand the differences between matter and its mysterious counterpart antimatter – the antiparticles that existed alongside particles in the primordial times of the universe, and which are nowadays strictly produced within the confines of specialist laboratories.

"Matter and antimatter started on equal footing, but today, we only have one type. So where did the other go?" asks Pellegrino.

To answer exactly that question, the LHC generates beauty quark particles in billions, along with their antimatter equivalent dubbed anti-beauty quarks, which were both common in the aftermath of the Big Bang. The LHCb detectors' role, in simple terms, consists of recording the interesting choreography of particles that occurs in the moments that beauty and anti-beauty quarks are produced and in turn decay inside the LHC.

Quarks are unstable and short-lived: in the flash of an eye, they disintegrate into other particles. Observing the process could give scientists clues as to why matter seems to have triumphed over antimatter – and in the long-run, a better understanding of the creation of the universe.

"The difference between the behavior of matter and antimatter is so tiny that to observe it, you need better and better instrumentation," says Pellegrino. "For that, we want to build a better detector. You can think of it as a photograph – you want to see sharper and sharper images. That's what it is about. That's ultimately why we go through this enormous technological upgrade."

The LHBc experiment's detector, in fact, works much like a very expensive camera, explains Pellegrino. Made of very thin and long optical fibers, the detector reacts when it interacts with particles, emitting photons that are then transformed into electrical signals thanks to silicon photonmultipliers. "A transistor detects light, like a camera taking a photo," says Pellegrino.

"The problem is that the photos of our particles are incredibly faint, and need amplifying. That process of amplifying expands your image, but also your unwanted background," he continues.

As particles collide at high speeds inside the LHC, this unwanted background can soon become pretty cumbersome – but cooling down the system has proven extremely effective in reducing the noise that can come in the way of scientists' observations. "That's why we need to cool down our camera to -40°C," says Pellegrino.

Cooling down the delicate, 0.25-millimeter-wide fibers that make up the detectors' sensors is no easy task; to complete it, Pellegrino's team decided to mount the fibers on purpose-made cool bars. The bars are required to fit in incredibly limited space, and to distribute temperature in a uniform way and with high precision, all the way along the narrow detection strip, which in total covers 150 meters. The components also need to be perfectly flat to ensure that the detector can achieve high-resolution images.

Most importantly, the bars have to be thin – a fraction-of-a-millimeter-thin. This is because, for maximum efficacy, as little material as possible should separate the coolant and the surface to be cooled.

"To do this with homemade procedures was, in principle, possible," says Pellegrino. "We spent two years milling custom-made copper bars, to which we soldered flexible cooling pipes with thin walls. But the entire process was extremely work-intensive. When we realized that we would have to repeat it about 300 times to complete the job, we realized we didn't have enough manpower or money."

In a lightbulb moment, Pellegrino, although without any prior knowledge of 3D printing, got in touch with 3D Systems. It soon appeared that the technology offered an appropriate solution: after trying to build the components with labor-intensive, siloed manual processes, 3D printing felt much like an "all-in-one" option.

That is not to say that Thomas Verelst, application engineer at 3D Systems, was spared long days of planning and designing the components. The pitch from CERN required the bars to be at once extremely thin and flawlessly flat, while not presenting any risk of leakage. "We had to go through a few cycles, all of which showed that the flatness really wasn't being reached," Verelst tells ZDNet.

When two layers of the product are printed and put together, for example, a tiny shrinkage typically occurs at the joining section. To compensate for the indent, Verelst had to reverse-engineer the process and calculate how to make up for the deviation in the original designs. His team tested an array of different options, trialing several orientations and angles, and even printing the parts back-to-back, in a mirror, to increase stability during the print.

"Achieving flatness took the most time. It was very much trial and error, and we did a few runs before it was OK. But the end result was a clean surface," says Verelst.

Eventually, Verelst found the winning combo: to print the final cool bar as a set of mirrored A and B components that are welded together to form a complete part. Pellegrino is now sitting on 600 components that are ready to be assembled, every single one of which has been thoroughly stress-tested, and is predicted to last a minimum of ten years.

What Verelst found to be an exciting, albeit challenging printing project, was also a source of huge pressure for the CERN team. Over the course of the LHC's 13-year-old lifetime, 3D printing has never been used to build any component. After dealing with the skepticism of a wider scientific community that is, by nature, wary of untested technologies, Pellegrino also had to manage the possibility of failure that comes with an untried new method.

Pellegrino explains that several panels within CERN examined his suggestion before eventually giving 3D printing the green light. "They wanted us to show it could really work," says Pellegrino. "Because once those devices are built into the experiment, they cannot be removed anymore. Every point is a potential point of failure, and the default assumption is that it will go wrong."

Pellegrino and Verelst, therefore, committed themselves to a rigorous and extensive program of testing to make sure that the printed parts would work as required – not just now, but for the next decade. "In the end, the proposal was accepted, and it better work, because the ten years are still in front of us," says Pellegrino. "But I think we have done our homework."

It is fair to say that the hardest part of the program is now over, according to the physicist. The assembled cool bars will undergo further testing, in batches, over the next few months, and by the end of the year will finally be connected to one big cooling refrigerator, ready for the LHBc experiment to start. In 2022, seven years after the LHC was put on hold for the upgrade, the program should be up and running again.