Ballmer, speaking at the Gartner Symposium in Orlando, was set up for a rough keynote from the beginning. A video of tech exec questions all asked whether Microsoft could compete with Apple on the iPad and iPhone. Gartner analyst John Pescatore noted that "no one is lining up in the snow to get that hot new Windows phone and there's no hit movie about SharePoint."

Gartner set up the interview as a consumer/enterprise dueling banjos sort of thing. The big topic was Windows Phone 7 whether it could appeal to both the business and consumer markets. Naturally tablets came up. When asked about whether there would be a Windows Phone 7 tablet instead of a Windows 7 slate, Ballmer held up a WP7 phone and said:

"This is Windows too. Could be this Windows or another Windows. There are technical details I'm not getting into today. We get multiple experiences."

Microsoft has officially said that there will be no Windows Phone 7 tablet. Indeed, Ballmer could have been referring to Windows embedded and Windows 7 on tablets. However, Ballmer seemed to indicate that Windows Phone 7 would be a possibility---or at least that experience. The Gartner analysts had noted they wanted the Windows Phone 7 experience on a tablet. 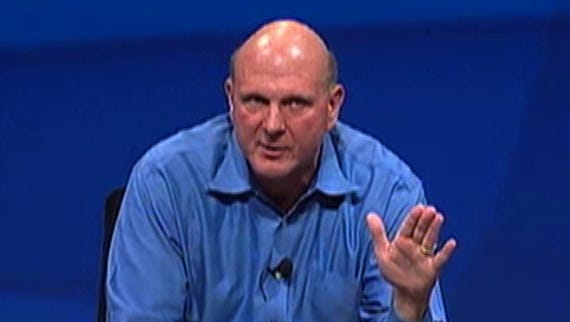 Reading the tea leaves, it sure sounds like Microsoft is at least open to a Windows Phone 7 powered tablet. That's a move that would make a lot of sense. Windows Phone 7 appears to be much more suited to tablet use. And if Microsoft can leverage its PowerPoint franchise, a WP7 tablet could be a winner. Instead, Microsoft seems to be force-feeding Windows 7 on the tablet form factor.

Ballmer was cagey throughout the interview about tablets, which were a big focus at the Gartner conference. On Windows tablet availability, Ballmer said:

"I'm not giving any specifics today at the Gartner conference. If you push me too hard I may do it tomorrow at a Forrester conference. There will be some by the holiday season. You'll continue to see an evolution of devices over the next several months. As get new OakTrail processor from Intel, you'll see form factors take off. The key is long battery life and "we need help with both the hardware and software."

Ballmer was then asked about how Windows Phone 7 would be judged. Ballmer seemed to indicate that patience would be a virtue and sales wouldn't be the big focus per se. However, he did quip at the end of his talk that he'd love 40 percent to 50 percent market share. Here's what Ballmer wants Windows Phone 7 to be a year from now:

In other words, Microsoft is planning for the long haul with WP7. Other nuggets from the keynote.