Icelandic regulators are allowing Flytrex and online marketplace AHA to use drones to deliver packages across the capital city -- but there's a catch.
Written by Kelly McSweeney, Contributor on Aug. 23, 2017 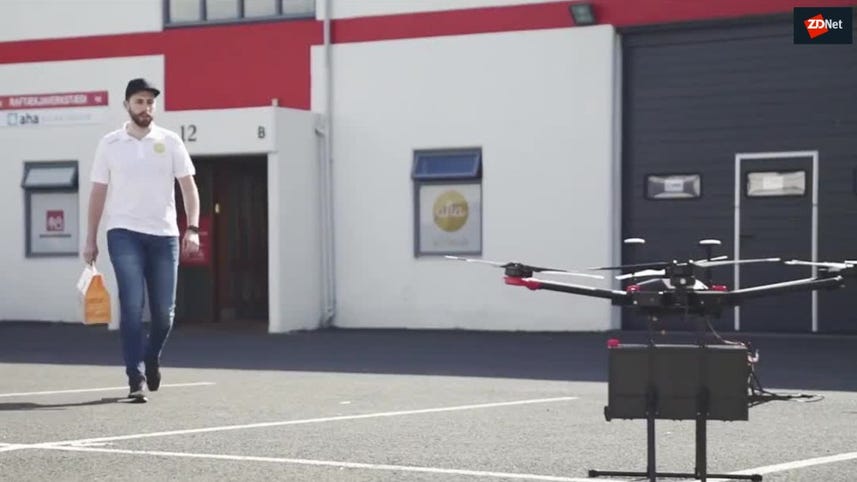 On-demand drone delivery service is now available in the northernmost capital in the world. Starting today, customers in Reykjavík, Iceland can have food and consumer goods delivered by an autonomous drone system. Packages will be carried across the city's bay to cut 20 minutes off usual delivery times. Iceland's largest online marketplace, AHA, has partnered with drone technology company Flytrex to launch the service.

This is a big step toward eventually being able to drop packages off at customers' doorsteps, but for now there's still a catch. The Icelandic Transport Authority (Icetra) granted Flytrex and AHA approval to use autonomous drones to deliver food and consumer products from shops and restaurants on one side of Reykjavík to a designated location across the city.

The restriction of a drop-off point will certainly limit the benefits of the drone delivery system, but it's better than nothing, which is what the rest of the world gets in the meantime. If the trial period goes well, more cities could follow this model for safely introducing drones to urban environments. Flytrex CEO and Co-Founder Yariv Bash says the goal is to deliver packages directly to customers in just a few months.

Iceland might seem like a random location for early adoption of drone technology, but the reason is actually quite simple: Iceland's regulators were the first to approve this kind of project. Bash tells us, "There were no existing approved guidelines or regulations for drone delivery in Iceland -- we went through a stringent regulatory approval process to get the Flytrex system in the air."

He adds, "The Icelandic Civil Aviation Authority understands that drone delivery is no longer a pipe dream, but a logistical system that has far ranging benefits to both businesses and consumers."

While drone delivery services would probably happen anywhere that allowed it, Reyjkavik is a great test city, since the coastal landscape is naturally difficult to navigate by car. Drones can now fly right over the rivers and peninsulas that delivery drivers have to circumnavigate. Bash says, "Utilizing drones, AHA can guarantee their customers much faster delivery times, while cutting costs for the business. Additionally, because Reyjkavik is very suburban, it makes it a perfect city for delivering packages directly into the backyards of consumers, so we're very excited for that next stage."

A robotic technology stack aimed at developers on a budget

It's a handy hexapod for the masses.

Crowdsourcing may have just helped close the "analogy gap" for computers

It's vexed computer scientists for decades, but a huge roadblock for true AI is falling