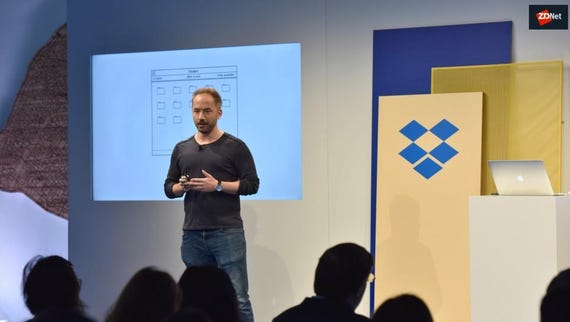 Dropbox is rolling out new integrations with video, audio, and transcription tools such as Adobe's Premiere Rush, Otter.ai, Simon Says, Videomenthe, Vidrovr, and GrayMeta's Curio. The integrations will allow users to access Dropbox files natively without leaving the application interface.

The file storage company has made partner integrations a key part of its user strategy. In June Dropbox announced native integrations with Slack, Zoom, and Atlassian. There's also integration between Dropbox and Google's G Suite that lets Dropbox Business users create, open, and edit Google Docs, Sheets and Slides that live in Dropbox.

Dropbox said today's slate of integrations is focused on its media clients, noting that the media professionals are among the most active Dropbox users in the world with more than a billion files created in 2017 alone.

"With the rise of HD, 4K and 8K video, online social video services, and podcasting, the need for faster, more efficient video and audio production workflows grow every year," Dropbox said in a blog post. "To continue supporting our customers' needs, we developed new integrations with your favorite video, audio, and transcription tools. By allowing you to access Dropbox files without having to leave their application interface, these integrations help you save time, stay on the same page with your team, and finish projects faster."

Dropbox has also been making changes to its interface to give users a single workspace where files, fragmented work tools, and teams come together. Last month, Dropbox unveiled a revamped user experience across all of its platforms, creating what it described as a new integrated workspace and the biggest user-facing change in the company's history.

The file storage company updated the Dropbox desktop experience, dropbox.com, and the mobile app, and rolled out native integrations with Slack, Zoom and Atlassian.

Files will be located within the AWS Asia Pacific Sydney Region.

The service is part of Magic Pocket, Dropbox's exabyte-scale infrastructure that it's been building since 2016.

The new feature is helpful for customers whose organizations have grown in scale. Here's how it works.