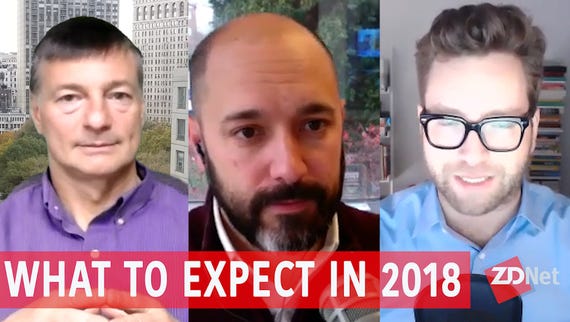 It's a new year and a new series of questions for business technology and the enterprise.

In the spirit of acknowledging that I don't have all the answers it's worth pondering the right questions for 2018. Here's a look at a few questions I'm hoping 2018 will answer.

How big will that bulls-eye on Amazon's back really get? Amazon had a great 2017 that kicked off with an Alexa everywhere strategy, included the acquisition of Whole Foods and highlighted momentum for Amazon Web Services. But like every tech winner discovers, the Amazon takes over the world meme has its drawbacks. President Trump's tweet about how the U.S. Postal Service should be charging Amazon more is just an appetizer of what'll be a chorus of folks wanting to derail the company's momentum somewhat. Whether the Amazon-as-evil-dominator theme sticks remains to be seen, but it's a given that the bulls-eye will be big.

Can Workplace by Facebook get any traction where many of us are sick of Facebook in our personal lives? Workplace by Facebook sounded like a no-brainer. The pitch: Employees can communicate and collaborate in the enterprise just like they do in their personal lives. What wasn't predicted was how Facebook use would be questioned on multiple front. Many folks are re-evaluating their use of Facebook and the time spent on the service. That rethinking process will hamper Facebook's enterprise momentum.

And a natural collaboration addendum...

When does the office/work/collaboration reinvention backlash begin? We've gone open floor plan, used more collaboration apps like Slack and only concluded that we need more focus to actually get something done. Enter a smart office approach that may include the Internet of things, new approaches and the introduction of Alexa to the workplace. If we learned anything in 2017, we've learned that there's no workplace magic bullet.

Will we really get a handle on AI? Artificial intelligence will be a topic beaten to death in 2018. Welcome to the wonderful world of AI-washing. There won't be a vendor on the planet that won't mention AI somehow. Our job (and yours) will be to figure out what AI is really just BS. But sorting out what's real in AI is only the beginning. The bigger question about AI will go like this: How does an enterprise manage a black box and algorithm that your line of business tech manager won't understand?

Is the Apple iPhone X a dud, detour or a premium device that helps sell the iPhone 8? Over the holiday break, stories about how the iPhone X wasn't dominating were a dime a dozen. It's also worth noting that iPhone 8 is topping iPhone X in Google searches. The dud vs. domination debate is a bit overblown. The iPhone X plays a role in a broader strategy. In other words, Apple may get its super cycle yet.

What company will prove data is the new oil? We've argued--as have others--that data is the new oil and industries will be transformed. What's lacking are the clear-cut winners in industries that have utilized their data to transform the way they do business and destroy rivals. Every company wants to be data-first, but it's unclear what firm delivers.

When does the blockchain backlash begin? Blockchain has been tossed into the currency/bubble theme. When you're grandmother is asking about Bitcoin you know the blockchain train has left the station. The sooner blockchain hits Gartner's trough of disillusionment the better. Why? Blockchain will be more important to the supply chain, security and real-world applications. The trading/bubble storyline is a distraction that'll hopefully blow soon.

How will the next cybersecurity debacle play out? There's one certainty for 2018: This year will be worse than 2017 for cybersecurity. Rest assured, there will be new techniques used for cyberattacks and enterprises won't be ready because they'll be too careless in the first place. See: