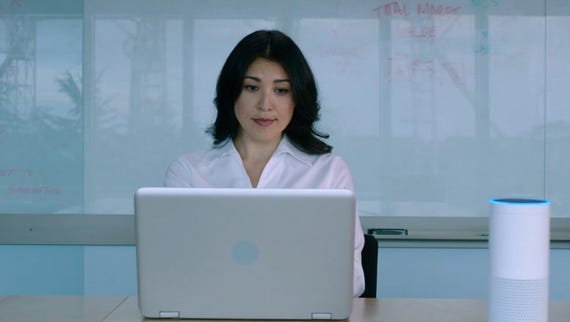 After a month of Alexa in every room: The good, the bad, and the creepy Big Brother may not be watching us, but Alexa is certainly listening in. David Gewirtz reports on the slightly creepy feeling he's been getting, along with the benefits of a ubiquitous voice assistant.

These commands are coming to an office near you via an Amazon Web Services Alexa for Business playbook that includes a bit of developer democratization and Apple's well-worn consumerization approach. Amazon has carpet-bombed your home with Alexa-powered Echo devices and now this inexpensive hardware will be landing at an office near you.

No matter how you slice it, Alexa for Business is going to be bad news for that crowded digital assistant field with the likes of Microsoft's Cortana and Google's Assistant.

Amazon CTO Werner Vogels outlined Alexa for Business at his re:Invent keynote. Vogels made the argument that voice will unlock new uses for digital systems and change the architecture of how they are constructed.

When launching Alexa for Business, Vogels said that it made sense to extend voice to work as well. Vogels added that devices and technology in conference rooms and desks is too complicated.

"Every meeting starts 10 minutes late," said Vogels. Alexa for Business is a managed service to put Alexa throughout the workplace to initiate calls and meetings. AWS has partnerships with Cisco, Polycom, Microsoft Exchange, Salesforce, SAP, Splunk and others to enable Alexa voice controls.

The plan for AWS is to simplify and provide a management plan for the smart office that's Alexa powered. AWS will also benefit since all the smarts in Alexa are in the cloud.

Alexa for Business will enable:

As for pricing, AWS will charge $7 per shared device and $3 per enrolled user. An example works out like this for a company that puts Echo devices in 10 conference rooms, two phone booths and the lobby and has 30 enrolled users:

That pricing illustration doesn't include the initial cost of the Alexa devices.

A scan of the agenda telegraphed the move. AWS had a session called "Alexa Hack Your Office" scheduled for Thursday. On Wednesday, there was an Alexa smart cities hackathon. The Hack Your Office description went like this:

How would you voice control your office using artificial intelligence? Come solve the problems you face in the Hack your Office hackathon. You will meet experts from the Amazon Alexa team including representatives from the Alexa Skills Kit, Alexa Voice Service, Alexa Smart Home, and others. Come hack with the brightest developers around in a space where groundbreaking ideas can emerge.

Here's why Alexa for Business will have as good a chance of dominating the smart office as any other technology:

Alexa for business can leverage two routes to the enterprise.

The first route goes through developers. The rise of AWS was developer led via sandboxes set up via corporate expense counts. From there, AWS continually added services to the point where a bevy of companies built their infrastructure on the cloud. Now AWS is becoming an AI, data and infrastructure as a service platform. Alexa already has an army of developers that be leveraged for business applications. AWS also has enterprise partners including Microsoft, SAP and Salesforce.

The second route is through workers, who are familiar with saying "Alexa." Like Apple's iPhone, employees, who are also consumers, are going to be familiar with Alexa. Devices at home will already be familiar to an employee. Alexa will be more at home in the workplace than Skype, Cortana, Einstein, Watson and any other name in the digital assistant space.

With the launch of Alexa for Business, Amazon is stomping with its size 12s all over the territory of its supposed new best friend, Microsoft and its digital assistant, Cortana.

Alexa for Business will allow businesses to build their own skills for the digital assistant that can be used in a work context. It will also feature all of the normal functionality such as enquiries and smart office and is expected to feature partners like Concur and WeWork at launch. This has the scope to both generate more skills and applications for the Alexa digital assistant but also to generate increasing loyalty to AWS. Some of these skills are likely to include integration with Office functionality such as calendar management, meeting room scheduling and so on. If this takes off, there is no reason why this should not spread to the desktop and deeper into Microsoft's core asset Office.

Alexa will now be capable of more via AWS' artificial intelligence and machine learning platform. Today, Alexa isn't the brightest assistant in the room, but it has scale. Sure, Alexa runs rings around Apple's Siri, but Google Assistant may be brainier. No matter. AWS is relentless with adding services and launch of Amazon Transcribe, Amazon Translate, Amazon Comprehend, and Amazon Rekognition Video all will serve as a back-end to Alexa. See: Amazon to put machine learning into the hands of more users

The smart office inflection point is here. HP, Lenovo, Microsoft and a host of others have been talking about the smart office. The focus on the smart office isn't surprising. As noted previously, companies have spent billions of dollars on open floor plans, new furniture and better snacks, but we're still using the same crappy old technologies we had a decade ago. Alexa will be welcomed with open arms. See:

AWS can cross sell and subsidize the hardware. Just like Amazon does in the consumer space, Alexa hardware will be inexpensive. In the enterprise, Alexa hardware could even be free--as long as it's attached to an AWS service.

Alexa has muscle behind it. Here's the rub. Alexa for Business will need to be integrated with a bevy of corporate tools. Sure, Amazon and Microsoft have a Cortana-Alexa partnership, but there will be glitches. Google will tie Google Assistant to G Suite and Google Cloud Platform and may not want to connect to AWS and Alexa in the office. Alexa is going to be bonked on the head a few times in the enterprise. However, Amazon will have employees on Alexa's side and be able to leverage AWS' clout with business and tech decision makers. Amazon doesn't sweat competitors, but every other company needs to answer the Amazon question

More: Microsoft and Amazon agree to enable Cortana, Alexa communication | Siri, Cortana, Alexa and Google Assistant are just the beginning: Voice is the future | Practical AI for the enterprise: Getting past vendors blowing smoke

Join Discussion for: Alexa for Business likely to win in smart...