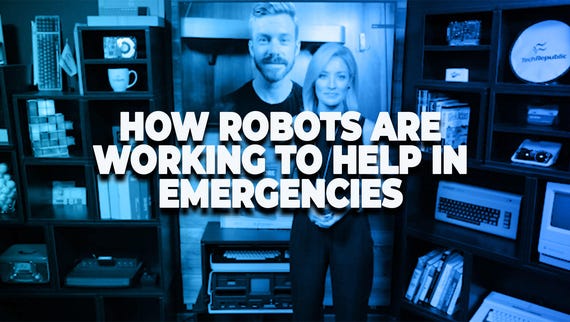 How robots are working to help in emergencies
Watch Now

Robots are seeing increased use in the direct aftermath of natural disasters. They can weave beneath rubble and spend time in radioactive environments that would fry a human. One of the most important functions a robot can perform in a disaster scenario is beaming vital sensor data to first responders.

But getting robots on the scene isn't easy. Debris can make ground transportation difficult, and thick smoke can impede an aerial approach. A company out of the vaunted California accelerator Berkley SkyDeck has a solution: Drop the robots from drones or helicopters.

Of course, most hardware isn't going to survive a fall. But with a name like Squishy Robotics, this company is clearly not making run-of-the-mill hardware.

"Our Squishy Robots are very compliant, meaning they are designed to take the force from a fall and not get damaged, and offer the situational awareness that is essential for first responders," explains Dr. Alice Agogino, co-founder and CEO, Squishy Robotics, Inc. and a professor of Mechanical Engineering at UC Berkeley. "We have a solution for the urgent, worldwide need to improve efficiency and increase the safety of emergency responders and the public."

Natural disasters that involve potentially hazardous air conditions are particularly troublesome for first responders. In order to measure air quality during fires or chemical spills, responders must manually position sensors throughout the site. But accessing a potential "hot zone" to get accurate readings requires the use of protective equipment like safety suits. The suits are expensive and cumbersome, and the process of donning them and then going through decontamination after a mission takes vital time.

The driving idea behind Squishy Robotics is to speed things up by taking humans out of the equation when it comes to taking potentially dangerous on-the-ground readings. The Squishy Robots are shaped like a geodesic ball and equipped with six cameras, GPS, and an interchangeable sensor payload for chemical, biological, and radiological readings.

So far, the company has signed collaboration agreements with the Los Angeles County Fire Department (LACoFD) and the Houston Fire Department (HFD), the largest fire departments in California and Texas, respectively.