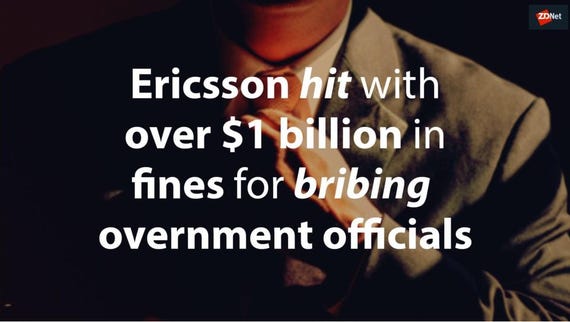 Swedish network equipment giant Ericsson has agreed to pay over $1 billion in fines to US regulators after pleading guilty to bribing government officials in multiple countries over a 17-year period.

As part of the settlement, Ericsson entered into a three-year agreement with the US Department of Justice (DoJ) to resolve charges of violating the anti-bribery, books and records, and internal controls provisions of the Foreign Corrupt Practices Act (FCPA). In the agreement, the DoJ agreed to defer any criminal charges and have them dismissed after the three-year period in exchange for Ericsson paying a fine of almost $521 million.

According to admissions by Ericsson to the DoJ, from 2000 to 2016, the company engaged in a longstanding scheme to pay bribes, falsify books and records, while failing to implement reasonable internal accounting controls. Ericsson also admitted to using third party agents and consultants to make bribe payments to government officials in China, Djibouti, Vietnam, Indonesia, and Kuwait.

Ericsson admitted the longest running bribery campaign was in China, which ran for the entire 17-year period and involved Ericsson subsidiaries providing millions of dollars to fund travel expense accounts in China that covered gifts, travel, and entertainment for foreign officials as well as sham contracts for services that were never performed.

Separately, Ericsson agreed to a settlement of almost $540 million with the Securities and Exchange Commission (SEC) relating to the same allegations that it violated the bribery and accounting provisions of the FCPA.

"As we allege in our complaint, Ericsson engaged in an egregious bribery scheme for years, spanning multiple continents, by surreptitiously using slush funds and funneling money through sham intermediaries," said Steve Peikin, co-director of the SEC Enforcement Division.

"The remedial measures required by our settlement, including the appointment of an independent compliance monitor, reflect the Commission's commitment to preventing these serious violations of our laws."

While the cases raised by the DoJ and SEC are related, the agencies resolved their investigations independently of one another and applied different standards of proof.

According to the SEC, the investigation covers a six-year period that ended in the first quarter of 2017 where Ericsson allegedly obtained business valued at approximately $427 million by using third parties to bribe officials in Saudi Arabia, China, and Djibouti.

The SEC kicked off its investigation into Ericsson back in 2013, and the DoJ became involved in 2015.

Combined, the DoJ and SEC fines are valued at around $1.06 billion.

"I am upset by these past failings. Reaching a resolution with the US authorities allows us to close this legacy chapter. We can now move forward and build a stronger company," Ericsson President and CEO Börje Ekholm said.

"The settlement with the SEC and DoJ shows that we have not always met our standards in doing business the right way. This episode shows the importance of fact-based decision making and a culture that supports speaking up and confronting issues. We have worked tirelessly to implement a robust compliance program. This work will never stop."

Earlier this year, Ericsson set aside a 11.5 billion Swedish krona (SEK) provision -- worth over $1 billion -- during Q3 2019 to cover any penalties relating to the investigations.

In a statement that was released following the settlements, Ericsson said the provision would cover the payment of both fines.

For the third quarter of 2019, Ericsson posted a net loss of 6.9 billion Swedish krona, dragged down by restructuring costs and the 11.5 billion krona hit to resolve the dispute with US authorities.

Revenue is up 6% for the Swedish telco equipment manufacturer but 10 billion Swedish krona in costs sends the company's operating income into the red.

Ericsson president and CEO said his company has to recognise it failed in the past.

Japanese telco KDDI goes with Nokia and Ericsson for 5G

Its first set of commercial 5G services are expected to go live in March 2020.

Some 65% of the world's population will have 5G coverage by end-2025, which networks will handle 45% of all mobile data traffic.

Join Discussion for: Ericsson hit with over $1 billion in fines...