"Over 4,000 people have registered within first 18 hours to become an e-Estonian!!!"

Estonia's deputy secretary general for communication and state information systems, Taavi Kotka, had a few thousand reasons to cheer on his Facebook account early last month, after the launch of registration for Estonian e-residency.

Within the first 24 hours after registration was opened, interest in e-residency was shown by citizens of 168 different countries, and the amount of people signed up to be notified when the e-residency application begins grew to over 6,000. 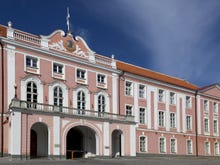 'This is so freaking huge man, it's insane': The plan to let anyone become European – digitally Estonia's government has launched a plan to bring e-resident ID cards to the country — meaning anyone can apply to be an Estonian citizen, whether they've set foot in the country or not.

On 21 October, the Estonian parliament passed a law enabling the state to give people who are not Estonian citizens or residents a digital identity. It is worth noting that the vote on the law was unanimous — all 80 members of parliament who attended the session, regardless of the political view or party affiliation, approved it. As a result of the vote, the state can open up the official e-residency application process in December as it had initially planned.

Getting e-residency doesn't grant a person full legal residency, citizenship, or the right of entry to Estonia, but it does enable them to use Estonian digital e-services and use digital signatures. These are considered as legally binding in the EU as traditional handwritten ones.

As a result, future e-residents will get the opportunity to start their own company and open a European Union bank account in a single day. As Estonia's tax system is fully online and the country's internet banking infrastructure is highly developed, an e-resident doesn't even have to be physically on the same continent to manage their business and investments in Estonia.

E-residents are given a special microchip-equipped ID card. While it isn't valid as a physical ID or a travel document because it doesn't have a photo on it, it can be used with special software and a USB reader for two-factor authentication, like the regular Estonian ID card. To provide a digital signature or get access to a service, an e–resident has to verify their identity by entering a secure PIN that only they know.

E-residency creates new opportunities both for people that are interested in investing in the local economy, but also for those who want to maintain existing commercial ties without having to physically reside in the country.

James York, a business development and management consultant who has been living in Tallinn for years but is now in the process of relocating to New York, sees e-residency as an opportunity to actively maintain the business and financial relationships he has built up in Estonia despite losing his residency-based digital identity.

"E-residency will allow me to continue the business relationships I've established here without interruption or the additional complexities that can arise when transacting with foreign companies. From the perspective of life and business in the US, maintaining a foreign company that exists within the rules and laws of the EU opens up the potential for profit and productivity, by taking advantage of the opportunities that can be had from leveraging access to goods and services seamlessly across markets," he said.

York believes the concept is going to be a success if the Estonian government's level of commitment to prioritising the program and maintaining sufficient levels of funding remain strong; the program is approached from a customer-driven development standpoint; and long-term business and inter-governmental relationships and good PR are fostered.

'The Delaware of the EU'

"It's entirely possible that within five years of the program being fully launched we could see Estonia becoming the Delaware of the EU," an optimistic York said, adding that the real long-term value, both to Estonia and those who participate in e-residency scheme, will come from exploiting the benefits of a secure digital identity in the context of a commercialised platform-as-a-service (PaaS).

"Estonia is in the unique position of being able to leverage its own X-road infrastructure and associated expertise for private sector use. This would enable truly secure and legitimized digital identities which would be supported by the full faith and credit, if you will, of a sovereign nation. That's never happened before and the economic win that could bring for the country is tremendously exciting,"  added York.

Estonia's Kotka meanwhile views the country's unique position in the digital field as an advantage which should be used to offer innovative services that other countries are not able to yet. "If Estonia is not going to do it, then some other country will at some point," he said.

Kotka and his team's initial ambition to attract 10 million people from all over the world to apply for Estonian e-residency by 2025 hasn't changed.

"The challenge is to figure out how to attract the people who haven't ever even thought about using Estonian economic environment and services, to join in."

Join Discussion for: Estonia forges ahead with its plan to let...