It uses algorithms to detect abnormal behaviour in water levels to deliver near real-time reports to farmers.
Written by Aimee Chanthadavong on Aug. 27, 2019 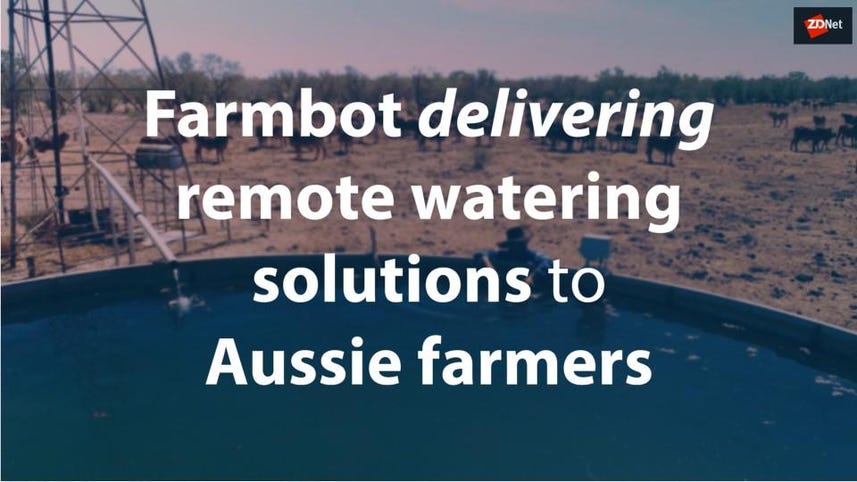 With water levels so low in Australia and a much drier new normal being set, it has never been more crucial for farmers to monitor water levels on their farms, and one Aussie invention has been developed to do just that.

To change this, Farmbot has deployed 1,700 of its remote monitoring units to farms across Australia. Each monitor sits on top of a water source, such as a water tank or dam, and delivers near real-time, event-driven reports to farmers when algorithms detect abnormal behaviour, such as when the water falls too quickly, rises too quickly, or stops moving altogether.

Farmers can also use the data to compare the tracking of water levels on their farms year-on-year, removing any unnecessary guess work.

"This is really critical because if a pipe bursts on a big dam and there are 5,000 cattle waiting there – and remember each cow is worth AU$1,000 each – you have AU$5 million worth of cows waiting to get a drink and they drink about 30-40 litres of water each day, then you need to know about it," Coppin said.

Coppin added the monitoring solution also removes the need for farmers to spend two or three days a week driving around their multi-hectare properties to check water levels of all the troughs and tanks on their farm.

Having built their sixth generation monitor, the solution now features two-way communications, Bluetooth connectivity, and has point-to-point connectivity so it can learn from surrounding devices, such as soil moisture monitors and geotags on livestock.

While Farmbot has been primarily focused on supporting cattle and sheep farmers in the first stage of operation, Coppin said the company has also commenced work in monitoring water levels for cotton irrigation channels, pivot irrigation, and is also trialling bore monitoring.

"Livestock is our primary focus, but the opportunity is right across agriculture. It doesn't matter if it's grapes, sugar cane, strawberries, or cows, sheep, or goats, they all need water," he said.

Farmbot was one of the initial participants of Telstra's muru-D accelerator program, and is now looking to expand operations internationally with plans for a Series A funding round expected to take place "in the near future" to help with the expansion plans.

"There are huge opportunities in North and South America. There four times as many livestock in the United States as there in Australia. I think there 20 million in Australia, there are 250 million in Brazil," Coppin said.