The Galaxy S10 is finally official, and we have everything you need to know.
Written by Jason Cipriani, Contributing Writer on Feb. 20, 2019 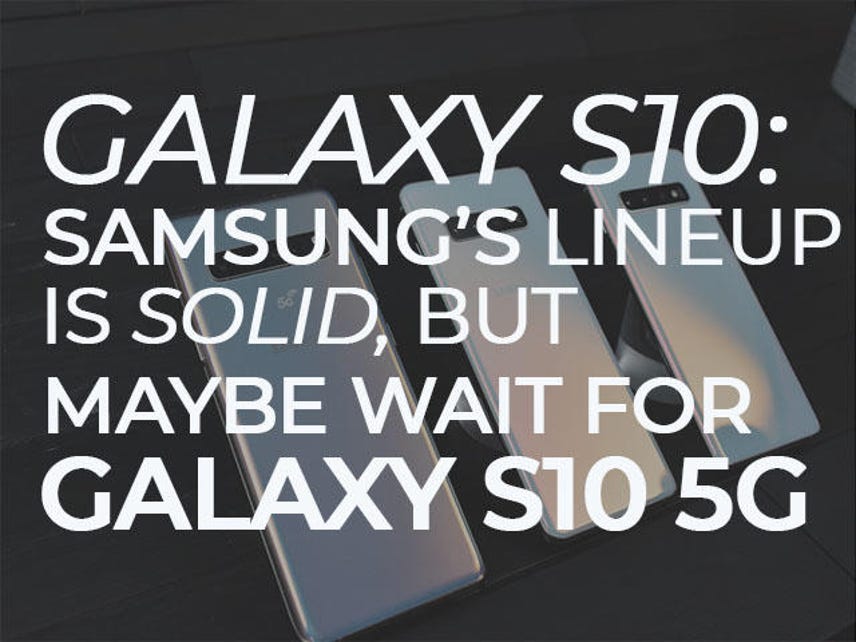 Samsung on Wednesday officially unveiled the Galaxy S10 in San Francisco. During the event, Samsung announced the Galaxy S10E, S10, and S10 Plus. The three phones all feature the new Infinity-O display and double as a wireless charging pad.

Here's everything you need to know about the Galaxy S10 lineup.

See also The Galaxy S10 decision tree: Which model you should buy

The S10 lineup launches on March 8, with pre-orders kicking off on Feb. 21 at 12:01 a.m. ET. Preorders will begin to arrive March 8. Verizon, Sprint, T-Mobile, AT&T, Spectrum Mobile, US Cellular and Xfinity Mobile will all have the S10 in stores on March 8. Amazon, Best Buy, Costco, Sam's Club, Target, and Walmart are the retailers who will have the S10 in store on launch day.

Samsung.com and the Shop Samsung app are other avenues you can use to get the Galaxy S10 in your hand as quick as possible.

During preorders, Samsung will give users a free pair of the Galaxy Buds earbuds.

Here are the starting costs for each model with its base storage option of 128GB:

In the US, the S10 line will come in Prism White, Prism Black, Prism Blue and Flamingo Pink. There's also a Ceramic Black and Ceramic White available for the S10 Plus.

Outside of the US there's a Prism Green and Canary Yellow color that users will have as an option.

Most of the leaks we saw over the past few weeks and months were accurate. The S10 line uses Samsung's Infinity-O display, spanning the entire front of the phone -- forgoing a display notch for a small, hole punch-like cutout for the front-facing camera.

The S10 doubles as a wireless charging pad as long as the battery is over 30-percent charged. Meaning you can use it to charge a compatible watch, phone, or Samsung's new Galaxy Buds wireless earbuds. When the phone is plugged in and charging, you can use it as a dedicated wireless charger, reducing the number of cords and accessories you need to pack on a work trip.

The S10 and S10 Plus each have three rear-facing cameras. The additional lens adds the benefit of getting ultra-wide angle photos.

For more details about the new phones, be sure to read our first take and hands on.

Here are the official specifications for each Galaxy S10 device Samsung announced on Wednesday:

Samsung's 5G variant of the Galaxy S10 isn't quite ready for release, but we do know a few things about it. For starters, Verizon Wireless will have a limited exclusive for the device sometime in the first half of 2019. AT&T, Spectrum Mobile, Sprint, T-Mobile, and Xfinity Mobile will carry the Galaxy S10 5G at some point during the summer, according to Samsung.

Apple's retail store experience appeals to customers who have a place to go for support of their iPhone, iPad, Apple Watch, or computer. Samsung is opening three new stores next week in an attempt to provide more for customers.

The digital assistant Bixby gets a makeover with its 2.0 release, as Samsung aims to create its own ecosystem. Should developers consider investing in yet another connected IoT platform?