Next week is the reported coming out party for Apple's iPad Pro according to 9to5 Mac's sources.

Along with new iPhones and an updated Apple TV, the company is set to launch a larger iPad which will be able to take advantage of new split-screen features found in iOS 9. Don't get your wallet ready just, however: Expected availability of the iPad Pro isn't until November although pre-orders will surely start before then.

Unless leaks building up to the actual product release have been wildly inaccurate, there may not be any big surprises in the iPad Pro. 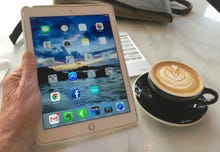 Apple's unicorn remains shrouded in mystery The iPad Pro has been waiting in the wings for some time now -- if it's even real.

The slate is expected to have a 12.9-inch display with 2048 x 2732 screen resolution, for example. It's also a given that a faster, more powerful Apple-designed processor is inside the larger tablet. I'd anticipate versions with optional LTE radios as well, similar to the existing iPad line.

Perhaps the biggest unknowns are the price and will Apple offer its own keyboard accessory for the iPad Pro?

Given that demand will likely be higher for power users and enterprise workers, I suspect the base model to have no less than 64 GB of storage. As far as cost?

A current iPad Air 2 with 64 GB is priced at $599, so I'm thinking either Apple drops the price of the Air and charges $599 for the Pro or we see a starting cost of $699. Any keyboard accessory would likely be an optional add-on if Apple even offers one at launch.