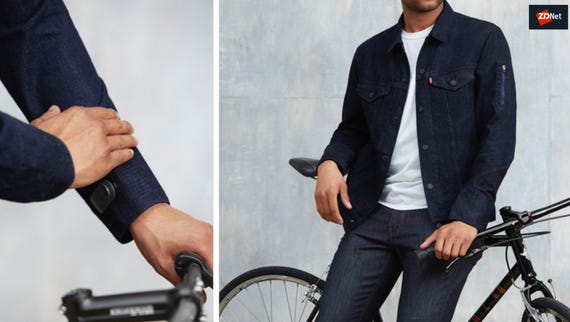 The inability to answer calls or do other smartphone-specific activities while riding a bike, standing on a crowded train, or carrying groceries can certainly be worrying, despite humans having survived for millennia without that capability.

Regardless, the denim jacket, called the Levi's Commuter Trucker Jacket, has been designed to address this problem, or perhaps just introduce a different way for users to interface with their smartphones.

It is the result of a long-term partnership between Levi's and Google to integrate capacitive threads with a copper core into the manufacturing process of a denim jacket.

The smart jacket is equipped with a removable snap tag on the left sleeve cuff that allows wearers to interact with their smartphone more safely using gestures, LEDs, and haptic feedback. It's somewhat similar to wearing a smartwatch.

But unlike a lot of smart garments, which target athletes, Levi's jacket is designed for urban commuters. Previously, technology was mostly embedded in compression shirts for athletes, which have sensors woven into their fabric and a transmitter module that relays the data to a smartphone connected via Bluetooth. But a lot of the previous smart garments weren't smart enough to understand gestures.

"With Jacquard technology, you can perform common digital tasks -- like starting or stopping music, getting directions, or reading incoming text messages -- by simply swiping or tapping the jacket sleeve," Google stated in a blog post.

The Jacquard app, available for iOS and Android, can be used to customise gestures to "invoke different digital 'abilities'."

The tag charges via USB and the battery lasts for roughly two weeks. The jacket can be washed, as long as the tag is removed.

The smart jacket is compatible with phones running Android 6.0.1 or newer and iOS 10 or newer, although Google said features vary between Android and iOS.

The Levi's Commuter Trucker Jacket will become available in select stores on Wednesday and can be purchased online in the US next week.

Almost three years ago, analyst firm Gartner predicted that smart garments would take off significantly, outstripping all other types of wearable fitness-tracking gadgets in terms of growth and becoming the single largest category in 2016.

However, in 2017, bluetooth headsets, fitness bands, and smartwatches are the top-selling wearable devices worldwide.