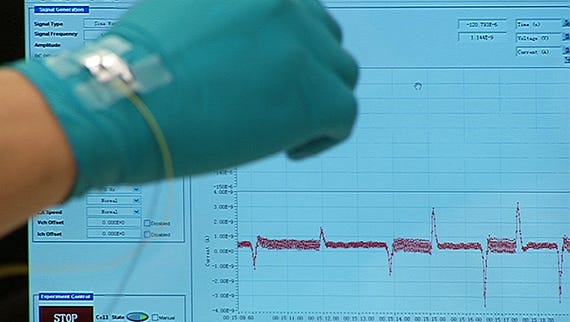 The Future Of... Clothes
Watch Now

Google's Advanced Technology and Projects (ATAP) group has once more mingled with the fashion industry to connect our wardrobes. As a result of a partnership with luggage manufacturer Samsonite, the tech giant has unveiled a smart backpack that can control your playlist or snap your selfies.

The Konnect-I backpack comes in two styles –  Slim ($199) and Standard ($219) – and is the latest addition to Google's Jacquard collection, which launched four years ago at the company's I/O developer conference.

Project Jacquard is underpinned by the concept of "ambient computing": the idea that users should enjoy computing power in a more natural and familiar way, through platforms that are embedded in their everyday lives. Hence, the interest in weaving tiny computers into users' clothes.

In practise, Jacquard comes in the form of a small tag that connects to an app to translate gestures into a command that the app can understand. On the Kennect-I backpack, the tag is fitted onto the left strap, and wearers can customize which of their gestures should unlock specific actions.

For example, brushing up and down the strap could control music, while a double tap could trigger a selfie, or prompt Google Assistant to share the latest news. An LED on the strap is also set to light up according to the alerts set by the user: a vibration and light can indicate calls and texts, for instance, or an alert that your Uber has arrived.

Hikers could even configure the backpack to receive turn-by-turn directions while on the go, without needing to look at their phone's navigation.

In the Jacquard app, users can set up the so-called "Abilities" that they would like their backpack to deliver when triggered by specific gestures. "This is only the beginning for the Jacquard platform, and thanks to updates, you can expect your Jacquard tag gear to get better over time," said Ivan Poupyrev, director of engineering at Google ATAP, in a blog post announcing the new products.

The Samsonite gear is only the latest in a collection that also spans Levi's jackets, Saint Laurent backpacks and Adidas shoes. All products have a Jacquard tag embedded, which lets wearers access online services by brushing their cuff, for example, or participate in a digital game of football thanks to a smart insole that can translate kicks and movements.

SEE: Apple AirPods and other smart 'hearables' are ruling the wearable tech market

The touch gestures that trigger the Jacquard tag are relayed by Jacquard threads, which is the focus of much of Google's research team's efforts. With "ambient computing" at the core of the project, in effect, it is key to integrating computing power in the products that users wear as seamlessly as possible. In other words, forget about electric wire-fitted jackets and backpacks.

Instead, the tech giant's design team has come up with a way to embed thin, small electronic components in the cotton and polyester fibers that users are familiar with. The end result has the same look and feel as normal yarn, and the interactive textiles that are produced as a result are, according to the ATAP team, indistinguishable from regular textiles.

Recently, the company's AI team, in collaboration with the ATAP team, developed a new "e-textile" that could be woven into hoodie strings to let users control electronic devices with a flick or twist of the cord.