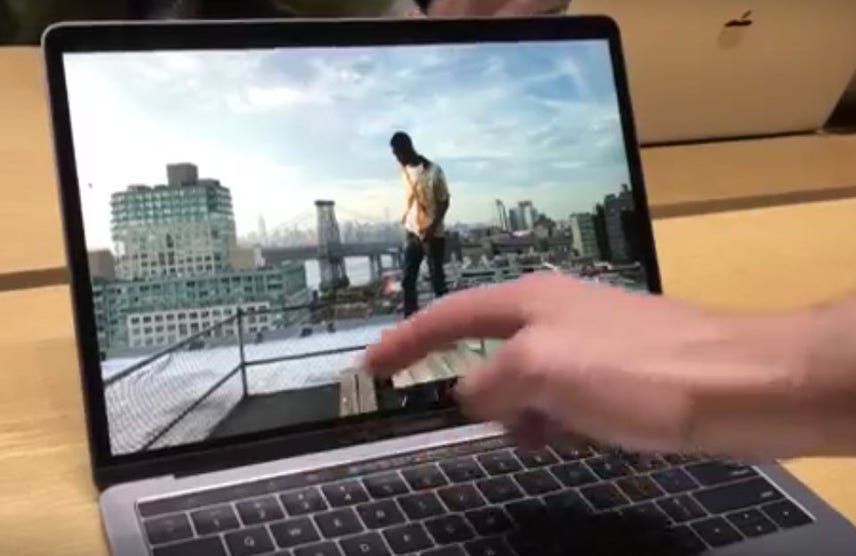 They look a lot like last year's 12-inch MacBook model, but they're refined and more powerful.

Does the Mac still matter?

In an exclusive interview, a trio of Apple execs outline why the Touch Bar is better on the MacBook Pro than a touch screen.

The base model, if you want to call it that, is on sale right now and begins shipping Oct. 28. It starts at $1,499 for its default configuration, but it lacks the headlining feature of the entire keynote: a touch-enabled bar that sits just above the keyboard, changing with every app to provide contextual controls.

The majority of the keynote was spent talking about and demoing the Touch Bar's adaptability to what a user is doing on his or her MacBook Pro. So, what does it do?

Open Mail and immediately the bar shows a compose button with a reply, spam, and archive button next to it. You can tap or swipe across the bar to interact with controls.

In Adobe Photoshop, the tools you need to quickly edit a photo are at your fingertips instead of using the mouse to click on digital buttons.

In Messages, for example, you can pull up a list of emojis. Photos brings up editing controls, while playing a video allows you to quickly skip back and forth with a swipe.

I'm not entirely convinced of the practicality of the Touch Bar. I imagine over time it will become an indispensable shortcut to common tasks, just as the Command button is on current Macs. But, right now, it feels more like Apple couldn't decide if it should make a touchscreen Mac, so it added a sliver of one instead.

In the brief demos I received, the bar was responsive and looks as if it was a natural extension of the keyboard. I suspect there will be a steep learning curve to adjust usage behaviors.

One point of frustration is the impending transition period for new MacBook Pro owners who don't own any USB-C cables or peripherals. That's right. Apple has gone all in on USB-C. Well, actually, Apple is calling the ports on the new MacBook Pro's Thunderbolt 3 ports, but they look like and interact with standard USB-C connectors.

Charging, connecting external displays, external storage, or even your iPhone is now down with a USB-C cable.

The two MacBook Pro models with a Touch Bar have four Thunderbolt 4 ports, while the non-Touch Bar model only has two. And, yes, there's still a 3.5mm headphone jack on all models.

The TV app is a one-stop shop for accessing programming you frequently watch, with new episodes automatically showing up regardless of the app or service your typically watch it in.

A curated section takes input from Apple editors and suggests shows you might like, similar to how Apple Music makes suggestions.

The TV app will also work on the iPhone and iPad, replacing the tired Videos app, with suggestions and programming synced between all of your Apple devices.

The TV apps looks intuitive and easy to use, but until I'm able to use it outside of the tightly controlled environment Apple presented, it's hard to say how effective the app is going to be.

One of the biggest pain points of relying on the Apple TV as your sole entertainment console (which I do) is trying to decide what to watch and in what app to watch it.

If the TV app lives up to Apple's promise, I'll be impressed.