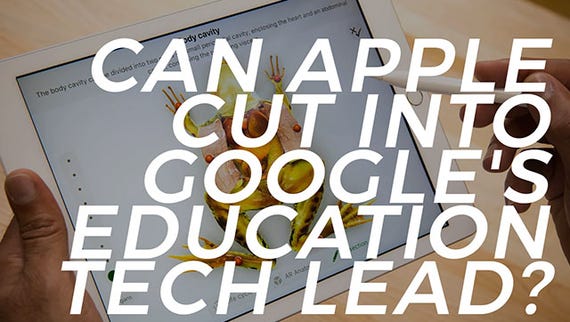 Apple in the Enterprise: A Strategic Guide Once a pariah in the enterprise, Apple has quietly emerged as a darling of executives and professionals because of the ease of use of the iPhone and the iPad. We look at how the influx of Apple devices is changing the tech landscape in business.

The platform battle in K-12 is one for the future of platforms. Apple historically has been strong in education and was in the market early in its history. I still remember the Apple IIc like it was yesterday. Toss in the iPhone, iPad, and the Mac and Apple has a solid footprint in education.

Must read: Apple's March 27 event: What to expect and how to watch

But the education game has shifted to an approach that favors Google and Microsoft. Simply put, Apple can roll out whatever hardware it wants, but its devices will likely be used with G Suite and Google Classroom or education flavors of Office 365. There are instances where Apple's app-centric approach works well for school district, but the cost of Chromebooks and G Suite are hard to beat.

In this Google education world, the likes of Apple have to compete with $40 a year for a student to take home a Chromebook and get a new one every three years or until you wreck the device before that time period. Suddenly, Apple devices look like a luxury that's not needed.

Add it up and the education game may already be lost. Microsoft also has a solid footprint in education, but it's about Office really with 2-in-1 devices. In the end, Excel and Office matters for education, so Microsoft will have a role regardless. FutureSource Consulting puts Google's education market share at 58 percent or so.

At an operating system level, Chromebooks continue to gain market share, reaching 58% in 2016, up from 50% in 2015. The strong combination of affordable devices, productivity tools via G-Suite, easy integration with third party platforms/tools, task management/distribution via Google Classroom and easy device management remains extremely popular with US teachers and IT buyers alike. The rise of Chromebooks has also set new industry benchmarks with regards to average device pricing, with prices reaching as low as $120 on certain projects.

Through the third quarter of 2017, FutureSource reported that Chrome OS was edging close to 60-percent marketshare. So, where does that leave Apple? Perhaps the Chicago event will give us something to ponder, but in the trenches Google dominates and is moving up the stack. The education game is about cutthroat pricing and productivity. It's worth noting that Google's K-12 site speaks to IT setup, security time, cost savings, management, and low hardware prices.

Apple speaks to its Classroom app for iPad, creativity, and coding. Pricing isn't the lead dog. Microsoft has a similar theme, but it does tout competitive hardware pricing as well as management.

Consider my high schooler. She has a Chromebook, G Suite, and uses Google Classroom for all but one of her classes. That one class uses Canvas, a class management tool that competes with Blackboard. Her take is simple: Canvas is too complicated and Google Classroom gets the job done. Her biggest gripe about Google's presence at school is that the Chromebook could be a bit snazzier, and the device is locked down in ways that don't make a lot of sense. The school district IT team obviously has a different view.

Another wrinkle is that Google Classroom is seen as a learning management system (LMS) for some. Microsoft's Education Teams is a rival. Gartner recently noted in a market overview:

Simple (and sometimes free) "LMS lite" products, such as Google Classroom, are providing some LMS functionality, but without the capabilities of a full enterprise product. However, some districts are finding this sufficient, even if just for the short term. This is adding some pressure to the enterprise LMS market to ensure customers are clear on why this additional functionality is important.

Read also: Chromebooks and Office 365 together will challenge Windows laptops | Windows is gaining on iOS in the education market

For higher education, the mix of tech vendors is going to be more diverse. G Suite, Canvas, Blackboard, Adobe Creative Cloud, Box, and a various of other applications are supported. Bottom line: The education market is software centric, and Apple is historically about hardware.

Join Discussion for: Apple's education event has elephant in the...