Lenovo revamped its data center strategy, launched a bevy of products, and set out to be the No. 1 supercomputing vendor. Here's a look at the plan.
Written by Larry Dignan, Contributing Editor on June 22, 2017 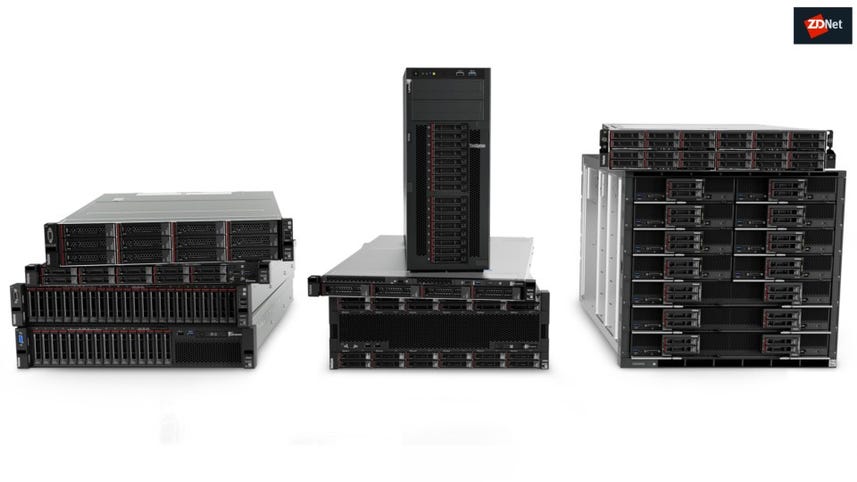 After assessing Lenovo's products and strategy, and interviewing execs, it's apparent that the company has one thing it hasn't had since acquiring IBM's x86 server business in 2014: A comprehensive plan. Lenovo has aligned its sales, supply chain and customer focus behind a new leadership team led by Kirk Skaugen, an Intel alum now president of the data center unit.

Lenovo laid out a few key goals. It wants to be the No. 1 supercomputing company. Lenovo says it's legacy free. And Lenovo's supply chain churns out servers as fast as it can PCs. In other words, Lenovo can compete with the white-box manufacturers favored by the hyperscale cloud providers and offer enough intellectual property and reliability to land large enterprises.

However, Lenovo trails Dell Technologies and Hewlett-Packard Enterprise and has to contend with Cisco as well as IBM in many areas.

When I asked Skaugen what he meant by legacy free, the data center head clarified. To Lenovo, legacy free means that it can run to software defined infrastructure because it doesn't have to sell you another storage or networking system. There's no legacy business to protect. "What we hear in every single account is that CIOs don't want to buy one more legacy xyz," he said. "We don't have to push an old product one more generation."

Couple that lack of legacy with a supply chain shipping 4 devices a second and Lenovo can compete on price as well as technology.

Add it up and here are a few reasons why Lenovo could grow its data center business.

Focus. When Lenovo bought IBM's x86 server business it decided to use a centralized sales approach. All that move did was ensure that the data center unit didn't get the attention it needed as 90 percent of sales went to PCs. Now Skaugen has a dedicated data center sales team and noted that he has been able to staff up quickly given HPE's H3C joint venture in China and Dell's acquisition of EMC. Simply put, there are talented enterprise sales folks on the market. "We have more detailed interaction with the customer and product definition," said Skaugen. "We're starting with what does the customer need."

Agility. Lenovo is a large company, but on the data center front it's smaller than HPE or Dell Technologies. Skaugen argued that Lenovo has a more simple menu and can make sales and product decisions quickly.

Scale. Lenovo has economies of scale because it secures its own commodities and makes its motherboards. That manufacturing control means that it can compete with contract manufacturers on price. "We are not afraid of high volume and low margin," said Skaugen. "We're supplying all of the hyperscalers with deep engineering collaboration."

Integration. Lenovo has now integration with the IBM assets and its own gear. Lenovo sold servers before as well as networking gear in China. The integrated ThinkAgile systems combine Lenovo's hardware and network operating system and management tools. Nutanix drives the software defined storage.

The ability to fill in gaps. Skaugen said that Lenovo's data center group will look to mergers and acquisitions as well as partnerships. "We will look at acquiring software. The world is moving to software defined, but we won't compete with partners," said Skaugen, who noted that Lenovo has more options than it can handle on the M&A and partner front. "A lot of companies are coming to us. We don't have the same threat level (as rivals) so that opens doors for joint ventures and M&A."

High performance computing. Lenovo wants to be the top supercomputing company and reckons that the company is well positioned to be a lead supplier as the US and China race for dominance. Skaugen said supercomputers are the concept cars that enable Lenovo to pilot technology and then move it to the enterprise. In addition, HPC is a good retention tool. "If our HPC investment means 1 percent less attrition it's worth it," said Skaugen. "We can justify the supercomputing investment just on employee pride. Knowing you're working on technology that can solve cancer and save lives is meaningful. It's good for the brand, employee and the right thing to do."