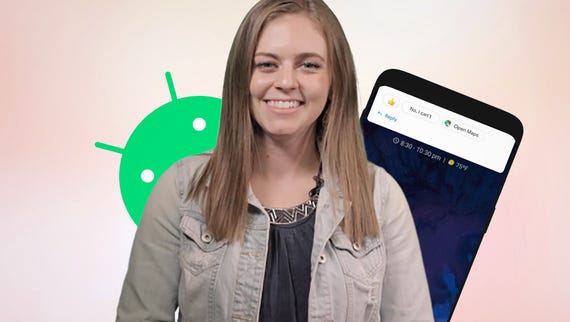 Have you installed the Android 10 yet? If so, you may be slightly confused, because it looks and works a lot like last year's release, Android 9 Pie. But it's actually loaded with some big changes.

Watch the video above to find out my five favorite new features in Android 10, or check out the transcript below if you prefer.

Pixel owners, it is your time to shine.

Google's major Android software update, Android 10, began rolling out September 3 to Pixel phones and will expand to other Android devices in the coming weeks and months.

To see if the new OS is ready for your mobile device, go to Settings > System > System Update. If it's not, then try opting into the Android 10 public beta. It should immediately arrive after that.

Once you're finally running Android 10, you'll notice it looks a lot like last year's release, Android 9 Pie, though there are some new features baked in. Here are five of them.

Android 10 brings a true, system-wide Dark Theme, which will darken your phone's entire interface to reduce the strain on your eyes and save your battery life. To turn on Dark Theme, follow these steps:

It should also be in your phone's Quick settings menu -- just swipe down from the top.

Bubbles in Android 10 can display small circular, floating notification alerts on top of whatever you're doing on your Android device. You're able to approve each app that wants to use Bubbles, to avoid overcrowding your screen. But Bubble's isn't really a user-facing feature in Android 10. It's a new notification option that developers can add to their apps.

A messaging app, for instance, could serve up a bubble that you could then tap to view a conversation without launching the app.

Hearing-impaired users will love Android 10's new Live Caption feature. It adds subtitles to any video being watched on the phone. You don't even need to have a data connection to use the feature -- it's all done on the phone itself.  Unfortunately, Live Caption is not quite ready. Google said it'll be added to Android 10 in fall 2019, starting with Pixel phones.

The back button is a classic navigation feature in Android, but  Android 10 ditched it for a full set of gestures so that users could move beyond buttons. The bar at the bottom of the screen can be swiped across to switch between apps, for instance. So, instead of the three icons at the bottom of your screen, you will now see a black strip with a white dash in the center (or vice versa).

And a new feature called Focus Mode lets you go into your phone's settings, select the apps you find most distracting, and pause all notifications coming from those apps. To enable the Focus Mode, specifically, make sure you're part of the Digital Wellbeing beta program. If you don't see it in your Digital Wellbeing app, then sign up for the beta. Next, follow these steps:

You'll see three choices: Dashboard, for setting timers in apps; Wind Down, which dims and tins the screen and turns on Do Not Disturb; and Focus Mode, which lets you instantly pause apps. You can also find Focus Mode in your phone's Quick settings.

For more about Android 10, including what else is new in the update, be sure to check out ZDNet.