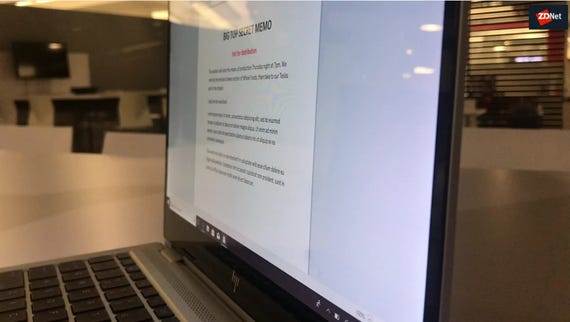 Video: HP's new laptop has a privacy screen to stop people from peeking

Here's something you don't see every day.

HP has included something nifty with its latest, refreshed flagship laptop. HP's Spectre x360, launched in October, lands with the usual innards: An 8th generation Intel Core chip, a 4K high-resolution display, up to 16GB of memory, and a 1TB hard disk.

But its standout feature, available in 13-inch models, is an integrated privacy screen.

The idea is that, with a touch of a button, the user can mask out their display to anyone sitting next to them, like nosy airplane passengers or over-the-shoulder eavesdroppers.

Sister-site CNET had one of the new HP Spectre x360 laptops in its New York lab this week, so we at ZDNet also took it for a spin.

Hitting the F2 keyboard button instantly whites out the display to anyone outside the user's 70-degree viewing cone, making it near impossible to read what's on the display. According to the computer maker, the privacy screen reduces 95 percent of visible light when viewed at an angle.

In our time with the HP Spectre x360, it's not bad -- and it works fairly well. The display, when the privacy screen is turned on, appears lighter in contrast. It's not any more difficult to read, but the quality of the display appears lessened; a trade-off if you want to work in public but want to shield your documents.

In a document, HP explains that when the privacy screen is turned on, "the proprietary backlight focuses one light source through the light control film towards the middle of the display thus enabling a viewing cone that makes screen content easily visible to those who are centered in front of the notebook."

When the screen is off, "the proprietary backlight uses two light sources to disperse light across all areas of the display which allows screen content to be easily viewed from any position."

HP said it would start integrating privacy screens, developed by 3M, in late-2015. The move is aimed at deterring visual hacking -- a fancy term for shoulder surfers and screen snoopers.

A handful of other HP laptops also include a privacy screen.