HTC has been busy of late with flagship devices the Desire and Legend, but the latest addition to its line-up is a budget device, the Wildfire.For a smartphone that costs just £229.
Written by First Take , Previews blog log-in on July 15, 2010

HTC has been busy of late with flagship devices the Desire and Legend, but the latest addition to its line-up is a budget device, the Wildfire.

For a smartphone that costs just £229.99 SIM free the Wildfire has a lot of attractive features. Corners have had to be cut to meet a pricepoint, and the most significant ones are battery life, processor choice, overall size (which impacts screen size), and screen quality. 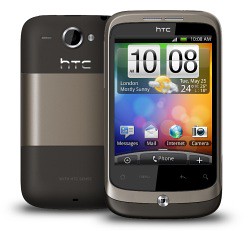 Battery life of any smartphone is rarely likely to get past a day, but in our experience the Wildfire seems to sit towards the lower end of the spectrum. With all guns blazing in terms of having power hungry features in operation you may well find you need to administer a battery boost during an average working day.

The processor runs at 528 MHz. To be honest we only really noticed it running slow when we had several applications opened at once, at which point things like text entry became a little stop-start. For the most part, though, there was no real problem.

The Wildfire is relatively small at 106.7mm x 60.4mm x 12.9mm and it has a somewhat squat appearance. Indeed those with especially small hands may find it is a little wide for comfort. The overall screen size, at 3.2 inches, is not particularly small though the Desire’s 3.7-inch screen seems an awful lot larger than the sheer number variance would suggest.

This is in no small part because the Wildfire’s screen is really let down by offering just 320 x 240 pixels of viewing area. This means an overall quite grainy viewing experience, and for Web browsing in particular it means you can’t actually read the text on some sites till you zoom in.

It is a great pity, because this is a key usability feature, and for our money a major drawback of the device.

As far as the rest of the specifications and features are concerned there is a lot to smile about.

The Wildfire is, of course, a 3G device, and it has Wi-Fi and GPS. A 5-megapixel camera with flash produces reasonable photographs. There is Microsoft Exchange support and of course the Android 2.1 device also supports personal email accounts including Gmail.

HTC is very hot on pushing social networking and there are some new features here which we’ve not seen before. In the Caller ID screen you can see Facebook status updates and the birthday of whoever is trying to call you, and there’s a little tool called App Sharer which makes it easy to email, tweet or text links to apps you’ve downloaded to anyone you think might like them. 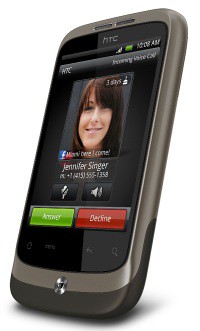 There are nice little tweaks we’ve seen in other devices too, such as HTC’s Leap concept which lets you see thumbnails of each of the seven home screens by pinching inwards on a home screen or choosing pressing the Home button. You can send incoming calls to voicemail by turning the device face down on your desk, and as you lift it to your ear the ringtone quietens down.

All these little things sit alongside the as usual super HTC Sense user interface and a strong array of built in applications that make HTCs devices the leaders of the Android world.

If we had the money we’d choose HTC’s Desire as our preferred handset every time, but anyone on a budget can get a lot of very attractive features here – they’ll just have to live with the downsides too.