US telcos receiving USF money could be forced to replace existing Huawei and ZTE equipment.
Written by Chris Duckett, Contributor on Nov. 24, 2019 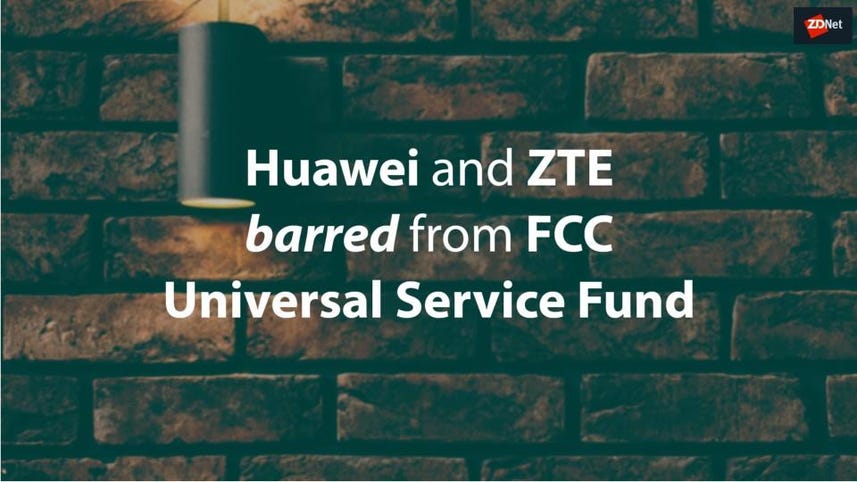 In its explanation [PDF], the FCC said Huawei and ZTE pose a national security threat.

"Networks are vulnerable to various forms of surveillance and attack that can lead to denial of service, and loss of integrity and confidentiality of network services," it said.

"As the United States upgrades its networks to the next generation of wireless technologies -- 5G --the risk that secret 'backdoors' in our communications networks will enable a hostile foreign power to engage in espionage, inject malware, or steal Americans' data becomes even greater."

The FCC said that it was looking to force telcos that receive USF funding to swap out any Huawei and ZTE equipment used within their networks.

"Both Huawei and ZTE have close ties to the Chinese government and military apparatus and are subject to Chinese laws requiring them to assist with espionage, a threat recognized by other federal agencies and the governments of other nations," the FCC added.

"The public funds in the FCC's USF, which subsidises US broadband deployment and service through four separate programs, must not endanger national security through the purchase of equipment from companies posing a national security risk."

In his own statement [PDF], FCC chair Ajit Pai said the ban was based on evidence and cited an EU report from last month that said 5G would increase attack paths for state actors.

"These concerns are by no means hypothetical. This summer, for example, an independent cybersecurity firm found that over half of the Huawei firmware images they analysed had at least one potential backdoor and that each Huawei device they tested had an average of 102 known vulnerabilities," Pai said.

"Given the threats posed by Huawei and ZTE to America's security and our 5G future, this FCC will not sit idly by and hope for the best."

On the proposal to force telcos to remove Huawei and ZTE equipment, the FCC chair said the commission was also looking at setting up a fund to offset replacement costs.

Despite being banned alongside ZTE, Huawei claimed it was being "singled out".

"These unwarranted actions will have profound negative effects on connectivity for Americans in rural and underserved areas across the United States," the Chinese giant said.

"Huawei believes this order is unlawful as the FCC has singled out Huawei based on national security, but it provides no evidence that Huawei poses a security risk. Instead, the FCC simply assumes, based on a mistaken view of Chinese law, that Huawei might come under Chinese government control."

The company called on the FCC to "rethink its profoundly mistaken order".

Australia took the decision to ban Huawei and ZTE from its 5G deployments in August 2018, with New Zealand following suit in November that year.

Both Australia and New Zealand are members of the Five Eyes intelligence-sharing group, alongside the United States, United Kingdom, and Canada.

Last week, the US Department of Commerce handed Huawei a second 90-day temporary licence following its addition to the US Entity List.

"The Temporary General License extension will allow carriers to continue to service customers in some of the most remote areas of the United States who would otherwise be left in the dark," US Secretary of Commerce Wilbur Ross said in a statement.

"The Department will continue to rigorously monitor sensitive technology exports to ensure that our innovations are not harnessed by those who would threaten our national security."

The extension marks a shift in tone from the department, which previously said the extensions were in place to allow American telcos to transition away from Huawei equipment.

Running on a 5G network, the Chinese tech giant's lab offers a testbed for artificial intelligence development projects, which includes use of its cloud and ModelArts AI platforms.

Chinese tech company shows off its alternative to Android, promises products this year.

Know before you buy: Every major retailer return policy compared

Know before you buy: Every major retailer return policy compared