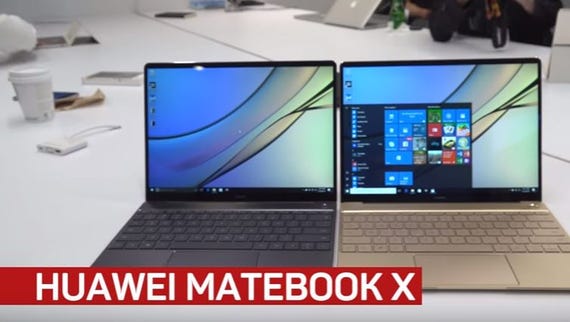 The Huawei MateBook from last year (see my full review) was a fantastic piece of tablet hardware with a flop of a keyboard. This year, Huawei introduces three MateBooks -- two of them with keyboards attached as notebooks and one as a 2-in-1 device.

The Huawei MateBook X, E, and D will launch this summer at prices ranging from EUR799 to EUR1699. We will soon have a review of the Matebook X here on ZDNet so stay tuned for that in early June.

The top-of-the-line model in this series of three new MateBooks is the MateBook X. It has a 13-inch Gorilla Glass display with a stunning 88-percent screen-to-body ratio, thanks to minimized 4.4mm bezels. It is only 12.5mm thick, too. The MateBook X includes a 7th-generation Intel Core i7 or i5 process, Dolby Atmos sound, and integration of Huawei's blazing fast and accurate smartphone fingerprint scanner as part of the power button.

There is a basic 1MP front facing camera and no rear camera. Dual stereo speakers with Dolby Atmos sound are reportedly ready to rock for a multimedia experience.

There are two USB Type-C ports on the MateBook X so you can charge or connect to the new MateDock 2 that has a USB-A port, USB-C port, HDMI port, and VGA port. It has a 5449mAh battery for a reported 10 hours of video playback.

The MateBook E is the successor to last year's 2-in-1 MateBook and comes with an improved folio keyboard with a hinge that adjusts up to 160 degrees. It has Dolby Audio Premium and also supports the MatePen for your stylus note taking needs.

The MateBook E ranges in price from EUR999 to EUR1299, depending on your processor, RAM, and SSD storage selection.

The MateBook D is the most affordable of the three new devices with prices ranging from EUR799 to EUR999. It has a larger 15.6 inch 1920 x 1080 pixels display with an 83 percent screen-to-body ratio.

You can purchase one in various hard disk drive and SSD capacities with options for NVIDIA GeForce 940MX graphics and Dolby Atmos sound.