The firm says it's one step closer to bringing the Hyperloop to reality after its "Kitty Hawk moment".
Written by Liam Tung, Contributing Writer on July 13, 2017 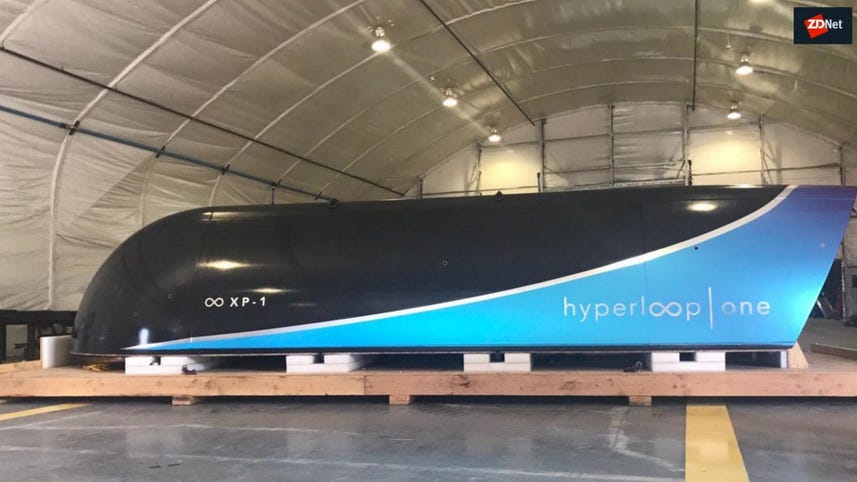 Hyperloop's first test in a vacuum tube only reached 70mph, but the company is hailing it as a breakthrough moment for the future of mass transportation.

The private test was carried out on May 12 at Hyperloop's DevLoop track in the Nevada desert, where the bare-bones sled cruised for 5.3 seconds above the track using magnetic levitation.

The vehicle achieved 2Gs acceleration and hit its target speed of 70mph. The company will now begin work on the next test, targeting 250mph.

Hyperloop is one of the firms attempting to prove that Elon Musk's vision for a rapid mass transport system with top speeds of 760mph can be realized. Musk released a design for the system in a 2013 paper called Hyperloop Alpha, detailing a maglev system that would operate in a near-vacuum environment.

Last May, Hyperloop One conducted the first non-vacuum open-air test and displayed its propulsion system, which pushed the sled to 116mph in 1.1 seconds.

This run tested its linear motor, vehicle suspension, magnetic levitation, electromagnetic braking, vacuum pumping system, and other components to demonstrate that the full system could operate as a single integrated unit in a vacuum.

"Hyperloop One has accomplished what no one has done before by successfully testing the first full scale Hyperloop system. By achieving full vacuum, we essentially invented our own sky in a tube, as if you're flying at 200,000 feet in the air," Shervin Pishevar, co-founder and executive chairman of Hyperloop One, said in a statement.

"For the first time in over 100 years, a new mode of transportation has been introduced. Hyperloop is real, and it's here now."

Despite the successful test, there are still many obstacles to overcome before the Hyperloop is used for transport, including gaining public trust and government support to deploy new infrastructure for the system.

Hyperloop One has addressed this potential resistance by running competitions for proposed locations around the world, which include nine routes in Europe and 11 in the US.

The company also took the wraps off its first prototype pod, dubbed XP-1. The 28-foot long pod is a shell constructed of aluminum and carbon fiber that will sit on top of the chassis. The pod would carry cargo and passengers through the tube.

The next phase of testing will demonstrate the Pod gliding over a longer track at higher speeds at the DevLoop facility in Nevada, according to Hyperloop One. In the meantime, it will be running more tests at its track to validate other components and software.

The company's linear motor is currently 1,000 feet long. The 1,640 foot-long tube it operates in can create air-pressure equivalent to 200,000 feet above sea level. The May 12 test only operated on a 100-foot portion of the motor.