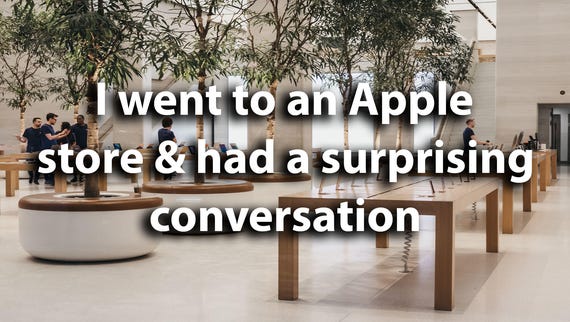 Some relationships are never going to be perfect.

We'd been through a lot together. Well, we spent a lot of time together.

We'd traveled as the world unraveled. We'd had a lot of dinners where it was just the two of us. But as we were locked up, I began to realize the relationship was weighing me down.

Somehow, I became conscious that my iPhone XR was a little heavy in the hand and not exactly the most timelessly gorgeous piece of hardware.

I am, however, a person of (some) principle(s). I won't buy a new phone without first being able to see it and hold it.

So what could I do but go to an Apple store and see if I'd be allowed to feel, as well as see.

It's Loud In Here. Again.

Having been checked as medically fit to enter, the first thing that struck me was the din.

The noise was one of the reasons Apple stores had become a little tough to tolerate.

I'd imagined, given that my county was restricting retail to 20% capacity, that the store might be blessed with a serene air. Instead, it was like the anticipatory buzz of a Selena Gomez concert.

I'd made an appointment and was soon greeted by a masked specialist. She was wearing what seemed to be a designer mask, conical like a lampshade at Design Within (A Few People's) Reach.

Immediately, I realized this was all going to be a little different.

I'm used to going to Apple stores and fighting for a small corner of a table to chat about the product in question. Here, thanks to the rigors of social distancing, I was shown to a large table that we had all to ourselves.

As if this was Tiffany's -- or, perhaps, your local bakery at the crack of dawn -- the specialist stood on one side of the table, spread her arms out wide, and said: "Here they all are." Four each of iPhone 12, iPhone 12 Pro, iPhone 12 Pro Max, and the iPhone Mini, all in different colors. All there for me to peruse.

Before I could even ask a polite question, the specialist added: "Feel free to touch them and hold them."

I showed her my XR and she immediately suggested the 12.

"That's probably the most similar to what you've got. The difference between the 12 and the 12 Pro is the telephoto lens. So if you're some sort of videographer, get the Pro," she said.

"I'm no sort of videographer," I admitted.

The Decision Was A Lot Easier Than LeBron's.

I'm not sure why people buy the Max phones, unless it's to game and watch videos. Which, I suppose, are two of the three biggest phone usages these days -- taking forty photos a day and posting them to social media being the other. Gosh, that telephoto lens will come in useful.

As for the Mini, it felt so small as to be the children's version. It's astonishing how Samsung managed to introduce the idea of much bigger phones before Apple claimed it had invented it all along.

For me, the 12 felt lighter and slightly slimmer than my XR, oddly but not unpleasantly retro and, hey, now I have two cameras, something I've never consciously wanted at all.

Oh, of course, I got the blue 12. I'm gullible and superficial, so it was created just for me.

The specialist talked me through phone plans, told me to stick with AT&T if the signal was good at my house and offered me $250 for my XR and even a free setup.

And then, as if to complete the personalized experience, she held up the box and, with a small game-show wave, said: "You'll notice the box is thinner this year."

"That's because we don't give you headphones anymore," she explained.

And That's When The Fun Started.

I'm used to store employees start to set up my phone, then leave me at a table while all the downloading, restarting, and re-setting up goes at a sometimes glacial pace.

"I'd usually put you in the corner," said the specialist, momentarily making me feel I'd committed a faux-pas. "But because of social distancing there's only space for two people up there against the wall, and there's two people there already."

So there we were at this expansive table, able to chat, address the world's problems, and muse philosophically about so many things.

"I see you've got a security guard out there. But you're supposed to let thieves steal things if they perform a raid. So what does the security guard actually do?" I asked.

I worried that, like one or two things at Apple, he was there just for show. She raised an eyebrow, which I think of as the masked version of a smile.

I discovered she really enjoys working for Apple, that the company has treated all its employees very well during the pandemic and that the worst sort of customers are the pretentious ones.

"They think they deserve extra because they're a CEO or something," she said. Oh, those people. Yes, I've met one or two.

We talked about Portugal, studying psychology, picking a career, getting a job at Apple corporate, the joys of walking asymmetry and quite a few other things that I won't mention here because you wouldn't either.

Not once did she try and hurry me along, start to serve another customer, or do anything but be a serene representative for the brand.

So many phone store employees have performed far beyond what should be demanded of them during the pandemic. They, like many others in retail, have suffered increasing levels of abuse from the ignorant. They've still come to work and been immensely tolerant.

When my iPhone 12 was finally set up, we bid each other goodbye.

We didn't wish each other Happy Holidays. Instead, we wished each other good luck with our dreams.

Join Discussion for: I went to an Apple store to buy a new iPhone...