IBM has appointed Ana Paula Assis as general manager for IBM Latin America. Assis is the company's first female executive to take up the most senior role in the region. 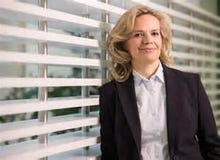 During a conversation at SAP Sapphire, Arnold opened up about women in the board room and how she's putting SAP's own software to work inside the company.

According to the firm, Assis will be accountable for the overall regional strategy as well as local talent development, in addition to pushing the company's digital transformation offering based on artificial intelligence and other new cognitive models.

Assis joined IBM in 1996. Since then she climbed up the ranks and held a number of leadership positions in Brazil, Latin America and other markets. Over the last decade, she served as director of financial services at IBM's global technology services unit in Latin America, as well as strategic outsourcing director and software vice president at IBM Brazil.

In 2015, Assis was named vice president of the software business unit for IBM's Greater China unit, which encompasses China, Hong Kong and Taiwan. She returned to Latin America in early 2017 and was responsible for the company's services offering in the region.

"I am very excited to lead an extremely talented and diverse organization in a dynamic and innovative environment such as Latin America," the executive says.

Assis replaces Rodrigo Kede Lima, who was named the top executive for the region in 2016 following a brief stint at Brazilian ERP vendor Totvs.

According to IBM, Kede Lima is relocating to New York to take up the role general manager for IBM's global technology services unit, covering the US and Canada.

In addition to Assis, other females lead large technology companies in Brazil, including Cristina Palmaka at SAP and Paula Bellizia at Microsoft. See article: Ten Brazilian female tech influencers you should know.