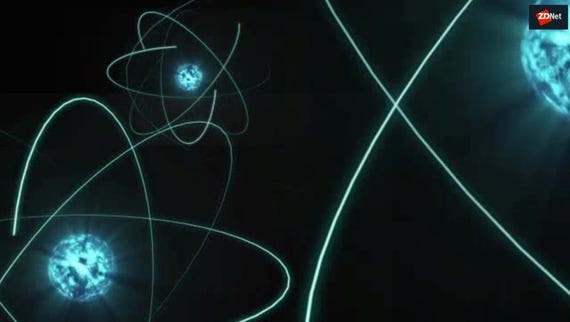 Video: How good can hard drives get? IBM hits one bit per atom.

IBM Research says it's developed a new approach to in-memory computing that could give it an answer to the hardware accelerators for high-performance and machine-learning applications sought by Microsoft and Google.

The company is eyeing a different take on traditional computing architectures in which software requires data transfers between separate CPU and RAM units.

According to IBM, that design, known as a von Neumann architecture, creates a bottleneck for data analytics and machine-learning applications that require ever-larger data transfers between processing and memory units. Transferring data is also an energy-intensive process.

Part of IBM's answer to this challenge is an analog phase-change memory (PCM) chip, currently implemented in prototype as a 500-by-2,000 crossbar array consisting of one million nanoscale PCM devices.

A key advantage of the PCM unit is that it can handle most of the heavy-lifting data processing without needing to transfer data to a CPU or GPU, resulting in faster processing with a lower energy overhead.

IBM's PCM unit would serve as a CPU accelerator much like the field-programmable gate array (FPGA) chips that Microsoft is using to speed up Bing and boost its machine-learning chops.

According to IBM, its study demonstrates that under certain conditions its PCM chip can be operated in an analog manner to perform computing tasks, and offers comparable accuracy to a four-bit FPGA memory chip but with 80 times lower energy consumption.

The catch with analog PCM hardware is that it's not cut out for high-precision calculations. Fortunately, digital CPUs and GPUs are, and IBM thinks a hybrid architecture could strike a balance that delivers faster performance and greater efficiency as well as precision.

The design would leave most processing to memory and then hand off a lighter load to a CPU for a series of accuracy corrections.

According to Manuel Le Gallo, an electrical engineer at IBM's Zurich lab and lead author of the paper, the design holds promise for cognitive computing in the cloud and could also help free up access to high-performance computers that researchers today need to compete for.

"With the precision we have right now, we can demonstrate a reduction in energy consumption of a factor of six compared with running on high-precision GPUs and CPUs," Le Gallo told ZDNet.

"So the idea is that to cope with imprecision when trying to do analog computing, we combine it with a standard processor. What we're trying to do is dump the bulk of computational tasks into PCM devices, but at the same time get a final result that is precise," he added.

The technique is better suited to some applications, such as digital image recognition, where misinterpreting a few pixels doesn't obstruct identification, as well as some healthcare applications.

"You can do the bulk of computations in low precision -- in analog, PCMs are very energy efficient -- and then use a traditional processor to improve accuracy."

It's still early days for IBM's prototype memory chip, which is only one megabyte in size. To be useful for modern data center-scale applications it will need to reach gigabytes of memory spread across trillions of PCM devices.

Still, IBM thinks it can achieve this goal by building larger arrays of PCM devices or having several of them operate in parallel.

IBM has big ambitions for its barely visible computer, including helping combat fraud with blockchain tech.