For its first-ever cohort in its first-ever accelerator, IBM is looking to eight Israeli companies to come up with their own technology firsts in a variety of areas.

"We have companies that are developing solutions for smart cities, biotech issues, transportation and logistics, and advertising technology," said Dror Pearl, director of IBM Israel's Global Technology Unit and a key figure in the management of the accelerator, known as AlphaZone. "But what unites all of them is their deploying Big Data and cloud in deploying their solutions. And these companies show that Big Data is more than just corporate number crunching."

The eight companies in the program were chosen from a pool of several hundred that applied, Pearl said – despite a very limited sign-up period, and with little publicity by IBM. 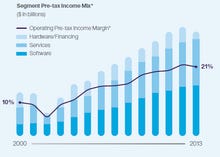 "We planned to open the registration site for Israeli companies for a month, but after a few days we began getting applications from all sorts of countries, including some that Israel does not have diplomatic relations with," Pearl said at the AlphaZone kickoff event last Tuesday.

"The companies we chose are top-notch, beyond seed stage. Some are already selling their products and services, and all constitute an excellent example of the quality of technology in Israel."

The 24-week program (taking place at IBM's facility in the Tel Aviv suburb of Petach Tikvah) will offer startups the storage and services available on IBM's SoftLayer cloud, access to IBM tech people and developers, mentoring from figures in both the technology and business world, assistance with patenting, IP and other legal issues, access to and meetings with angels and investors, and Demo Days, both in Israel and the US or Europe.

IBM will take no equity or IP interest in the startups, said Rick Kaplan, IBM's country general manager for Israel. IBM's interest in the program "is to build deeper, earlier relationships with startups. This is a big moment for us, and another chapter in the IBM story in Israel, which began in 1947 and continues until today," Kaplan said.

Accelerator program member Emerald Medical Applications provides a good example of how Big Data works in the biotech arena. The four year old company is using photos to build a database of skin cancer sufferers in order to enable doctors to more easily detect the disease in its early stages.

"Right now there is no comprehensive database for melanoma and other skin diseases that doctors can check a patient's condition against," said CEO Lior Wayn. "Today doctors check for melanoma by comparing changes in the patient's skin condition over time." By the time the cancer is detected, of course, it needs to be treated as an advanced cancer, with mitigation much more difficult than would have been the case if it had been detected earlier.

By comparing images taken by doctors of patients with those on its online database, Emerald can analyse an uploaded photo and determine whether there is anything to worry about — and what to do if there is a problem. Emerald analyses masses of uploaded photos to build the database, enabling doctors to much more easily understand what a mole or other skin conditions means in the context of skin cancer.

Big Data also has the power to make life easier for commuters — and help companies spend less money, according to Amos Haggiag, cofounder and CTO of fellow AlphaZone startup OptiBus.

"Today, the scheduling of buses, drivers and timetables is done either manually or by legacy software," Haggiag said. "In both cases, it’s a lengthy and complex process and there is no 'birdseye' glance over the entire system. This causes delays, lengthy downtime for drivers, buses returning empty as well as waste of fuel and inflated fleet size, costing operators tens of millions of dollars a year."

Traffic, vehicle breakdowns, absent drivers — all these can lay the fragile plans of the dispatch office waste. OptiBus has a solution — algorithms that can predict where and when problems are likely to crop up, allowing dispatchers to reroute vehicles or more efficiently deploy backup buses.

"At any one time a bus company has to have 20 percent of its fleet fuelled and ready to go as backups, paying a substitute driver for his time," Haggiag said. "Our predictive analysis looks at traffic patterns, weather, vehicle repair history, commuting habits, special events, and anything else that can affect ridership and scheduling." OptiBus is already in use on many lines in Israel, and in several European cities as well.

For those who think social networks are a waste of time, LeanCiti's message is that used right, social network data can be marshalled to save energy, water, and money.

"Smart cities usually work 'top-down,' with the best practices and suggestions for saving electricity or water coming from a government agency," according to Eran Aloni, LeanCiti CEO. "That's one reason they often aren't effective."

To get people on board with a smart city agenda, you have to get them involved – and LeanCiti does that in a Big Data way, Aloni said.

"We gather data from social networks on how people are using resources, enabling providers to share, compare and manage any type resources data, such as renewable energy production, water consumption, smart meter readings or greenhouse gas emission. With this information they can more easily analyse usage patterns, and zero in on the areas that need improving."

One way to do that, said Aloni, could be to run contests between residents or neighbourhoods, a tried and true way to get people to change wasteful habits. "Only with Big Data analysis using our algorithms is this possible," he said.