Full Bio
on May 3, 2020 | Topic: Coronavirus: Business and technology in a pandemic 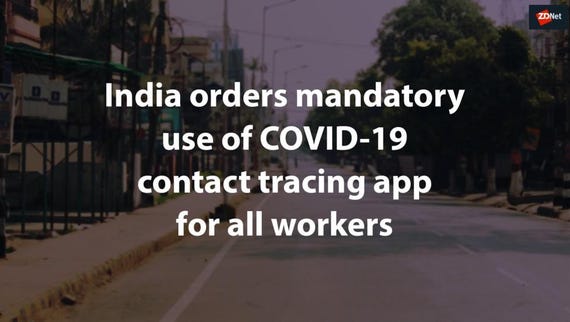 The Indian government announced on Friday that all workers, both in the public and private sectors, are required to install the nation's COVID-19 contact tracing app as it begins to ease some of its lockdown measures for lower-risk areas.

Likewise, it is also mandatory for residents living in "containment zones" to download the app and they cannot leave these zones except for medical emergencies, and for maintaining supply of essential goods and services.

According to Home Affairs, local authorities in these "containment zones" are enforcing intensified surveillance protocols, which include contact tracing, house to house surveillance, as well as home and institutional quarantining of persons based on their risk assessment.

These zones are the "most sensitive areas of the country, from the spread of COVID-19 point of view", it said.

The onus for ensuring that employees and people living in "containment Zones" install the app will be placed on the head of organisations and local authorities, respectively, said the Ministry of Home Affairs.

The app, called Aarogya Setu, was released last month and alerts users who may have come into contact with people who have contracted COVID-19 or are deemed to be at high risk. Since its release, it has been downloaded over 50 million times on Android devices, according to Google Play Store data.

On the same day, the government also announced it would extend the lockdown for a further two weeks but permit a "considerable relaxation" of restrictions in lower-risk areas.

Offices will be allowed to be reopened, but they will have to implement measures such as gaps between shifts, staggered lunch breaks, and thermal scanning, among others.

Meanwhile, people operating in areas that are not as deeply affected by the coronavirus pandemic, called "Green Zones", will be permitted to resume all activities from 7am to 7pm, except for those that are still prohibited throughout the entire country.

These include travel by air, rail, metro and interstate movement by road; the running of schools, colleges, and other educational institutions; hospitality services, including hotels and restaurants; entering places of large public gatherings, such as cinema halls, malls, gymnasiums, and sports complexes; and entering public places of worship.

Australia and Singapore have similarly released their own iterations of the app in recent months, and the UK is making preparations to do the same in the coming weeks.

Critics of digital contact tracing have said such apps are unlikely to replace or substantially enhance the urgent labour-intensive detective work of contact tracing.

"The lure of automating the painstaking process of contact tracing is apparent. But to date, no one has demonstrated that it's possible to do so reliably despite numerous concurrent attempts," researchers and academics at the Brookings Institution said.

At the time of writing, the World Health Organization reported that there have been nearly 3.3 million confirmed cases, with almost 240,000 fatalities as a result of the virus. India has reported almost 40,000 cases and over 1,300 deaths.

Join Discussion for: India orders mandatory use of COVID-19 contact...